Air National Guard trainees take aim on the 20,000-acre Range Complex Training Facility at Joint Base McGuire-Dix-Lakehurst. The more than 60 ranges on the joint base are used for pistol, rifle, machine-gun and grenade-launcher training.
Photo by Matthew Wright

The first thing you notice is the fence. Driving northeast through a rural stretch of Pemberton Township along Route 616 in South Jersey, homes and businesses melt away until all that’s left are stretches of forest—striking only because of the unbroken span of 5-foot metal fencing on the eastern side of the road. Beyond the barrier is what locals refer to simply as “the base.”

The fence wasn’t always there. Prior to September 11, 2001, civilians were free to visit the base whenever they pleased; heightened security concerns put an end to that. Now, anyone wishing to get a look inside needs to work there, live there, or get permission from someone who does. The result: Joint Base McGuire-Dix-Lakehurst is more mysterious than ever to the average civilian.

“Before September 11, people could drive in here and interact with the installation whenever they pleased. But then we closed the base and put in entry-control points. [Now] one of my concerns is that we isolate ourselves from the citizenry we are sworn to protect,” says Martin Klein, until recently the deputy commander for the Army at the base. Klein is as decorated as he is genial and well liked, and much of his 1½-year tenure in South Jersey has been focused on making sure the base remains connected to the world outside the fences.

“I think it’s important to keep in touch with the citizens of our nation,” says Klein. “We don’t want to develop this Army subculture or this military subculture. That’s antithetical to what our founding fathers wanted for our military.” (In August, Klein was promoted from colonel to brigadier general and reassigned to an Army command in Alabama.)

It’s hard not to be awed by the base. It spans more than 20 miles from east to west, comprising 42,000 contiguous acres—an area roughly half the size of Essex County. It has airfields, firing ranges, residential housing developments, cutting-edge technology centers, combat simulators, office buildings, barracks, warehouses, and hundreds of additional infrastructure elements essential to its mission of maintaining sustainable readiness for tens of thousands of servicemen and women in all five branches of the United States military.

What’s more, the base is an economic juggernaut that contributes nearly $7 billion to the New Jersey economy each year and supports close to 65,000 jobs, making it the state’s second largest employer. And yet, says Klein, not many people even know it exists.

“I talk to civilians all the time who are flabbergasted when they hear we’re still here,” he states. “But we’re training more people than ever before, and we appreciate it when people want to learn about us. Because it’s a story that hasn’t been told for the better part of a decade.” Officers and trainers check targets on the pistol range for accuracy. Photo by Matthew Wright Joint base personnel prepare fighting men and women for battle and more, as epitomized by the base’s iconic Ultimate Weapon statue. Photo by Matthew Wright Members of the Air National Guard on a 1.5-mile run to help determine their overall fitness. Photo by Matthew Wright A trainee on the pistol range. Photo by Matthew Wright 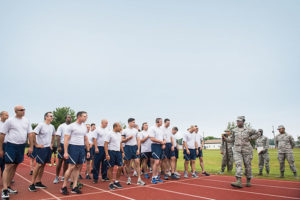 An officer briefs Air National Guard trainees on their fitness goals before they take another trip around the track.

Before we enter the base, it’s important to understand a bit of history and logistics.

What’s now known as Joint Base McGuire-Dix-Lakehurst—or JB MDL—was three separate military bases before they merged in October 2009. The move came as a result of the 2005 Base Realignment and Closure Commission, a Department of Defense proposal that called for combining 26 bases across the country into 12 joint installations.

The idea was to increase operational readiness and improve efficiency of the bases, eliminate redundancies and share logistical support. At the newly minted JB MDL, the initial reaction was positive, but not without some bumps in the road.

Fort Dix, the oldest and largest of the three installations, was founded in 1917 as Camp Dix and served as a training and staging ground for Army units during World War I and a demobilization center when the war ended. It became a permanent Army post in 1939 and served the same purposes during the Second World War as it did in the first.

In the decades that followed, the base continued to expand geographically as well as operationally, training soldiers for Vietnam and mobilizing soldiers for Desert Storm and the conflicts in Iraq and Afghanistan. And even though Dix no longer bears independence of name or function, a great deal of pride in its history and identity remains.

“I constantly feel inspired being here,” says Command Sergeant Major Patrick McKie, the top noncommissioned officer with the U.S. Army Support Activity (ASA) at Dix. “Think about the millions of soldiers who have come through here to train, many of whom never came home. To us this is very hallowed ground. And that’s why the joint basing was a little painful. It took some of that identity away from the base.”

McKie—a married father of two who was born and raised in Nebraska and has been stationed in South Jersey since August 2016—doesn’t dwell on this sentiment. But it’s important, he says, to appreciate the larger context of the merger.

“It’s kind of like changing the name of your hometown. You can imagine how that might make lifelong residents feel,” says the affable McKie. “Service cultures are very strong and there’s a lot of pride. They took Fort Dix and made it JB MDL, with the Air Force taking the lead. I’m okay with it, but it was a shock to a lot of people.”