Consider, for instance, Sergeant Major Jeremy McKean, a steely-eyed, lifelong Army veteran from Tulsa who was appointed deputy commandant for the NCO Academy Fort Dix in October 2014. It is his 14th base assignment. McKean is responsible for overseeing a variety of leadership-skills courses and physical-fitness programs for a wide range of soldiers on the Dix side of the base.

With strident enthusiasm softened by a slight Southwestern drawl, McKean demonstrates the capabilities of several “smart” classrooms decked out with $200,000 of integrated technologies inside one of the installation’s education buildings. Here, small-group classes cover everything from leadership roles in combat situations to sexual-harassment training and suicide-prevention awareness.

“When most people think of the Army, they think about guns, bullets, rockets. But we’re conceptually so far beyond that,” says McKean. Quickly he slips into Army jargon—not uncommon on the base. “We focus on institutional and operational learning pillars and dive into that self-searching, critical-thought domain. We’re stewards for culturization. We value diversity. We integrate all individuals who want to serve, including those who are transgender, gay, you name it. It doesn’t matter who you are on the outside or where you came from, as long as on the inside you want to serve this country.”

On the civilian side, there are people like Jim Armstrong, a self-described Army dog who did his basic training at Dix in 1958, retired from the Army in 1983, and is now the facility manager of the Colonel Jack H. Griffith Jr. Memorial Field House and Doughboy Gym, two large fitness centers on the Dix side.

“When I first came into the service, I had no intention of staying. But I’m a jock and I love my Army. So when they provided this opportunity, I took it,” says Armstrong. “People ask me why I’m still working and why I’m still here. Well, this is my family. Dix is like a home. And when people come through the doors of these gyms, I want them to feel that way, too.”

Out in a remote stretch of the installation, Chris Kobryn ponders his role as a range-operations officer for the Army’s vast Range Complex Training Facility. The complex occupies 20,000 acres of the southeasternmost quadrant of the Dix side and includes more than 60 ranges for rifle, pistol, machine gun and grenade-launcher training. This carefully arranged wilderness also includes a mock forward operating base that mimics what soldiers experience in Iraq and Afghanistan, as well as an assemblage of abandoned structures—an old church, a three-story hotel, a railroad car, a mock gas station—used for training soldiers in urban combat situations.

“I think I have the best job in the world because I get to support the war fighter to the highest possible standards,” says Kobryn, who served in Iraq and Afghanistan as a machine gunner and squad leader, and has been working here as a civilian employee for 12 years, planning and organizing live-fire training exercises while also supporting maintenance of the numerous ranges. “My calling was with the armed forces, and this is a nice second to actually being a war fighter. But everyone here has different experiences, like anywhere else. Some good, some bad. For me, it’s the best.” The base is also home to a full-court gym. Photo by Matthew Wright 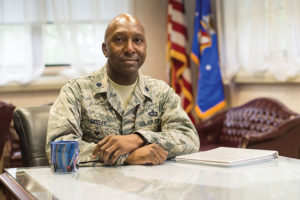 Lieutenant Colonel Timothy Motley, Deputy commander for the Air Force’s Mission Support Group, oversees lifestyle perks and essentials like housing and food, making sure that “everything you can find on the outside you can also find on the inside.” Photo by Matthew Wright

Air Force Staff Sergeant Sydney Manning is equally enthusiastic about her experience at JB MDL. She and her husband, a former member of the Air Force, have lived and worked on the installation for a year now. It’s her fourth base assignment since enlisting five years ago. This winter, the two of them will be leaving for California, where Manning will have 17 months of training to become a Korean-language analyst for the Air Force. For now she runs the JB MDL Facebook page, works in “command information” and produces promotional and mission videos for the base.

“I think the biggest thing people don’t realize is that a lot of time working here on base is just a 9-to-5 job,” says Manning. “You’re not always crawling through the dirt or shooting guns or wearing 100 pounds of gear in the summer. There are people who do that, but mostly this installation is about day-to-day tasks that help make sure people are getting trained and getting paid.”

Like so many here, Manning emphasizes the focus on “constant readiness.” Sure, it can feel monotonous and repetitive at times. And sure, complacency and restlessness can seep in now and again. “But we do the constant training and preparation for those moments when someone needs us,” she says. “That way when someone tells you it’s wheels up in 30 minutes, everyone’s ready to go.”

Driving through one of the many housing developments on the base, one encounters another disconnect between the cinematic portrayal of base life and the reality of living and working inside the fences of JB MDL. Slowly guiding his wife’s SUV through one of the base’s residential enclaves, McKie repeats a familiar refrain.

“You know, it’s really like living anywhere else,” says McKie, who resides in a neighborhood of about 26 single-family homes designated for senior enlisted personnel. “People walk their dogs. They have barbecues. Everyone waves to everyone.” One difference from the outside: “You’re not locking your door when you leave.”

According to the 2010 Census, more than 11,000 people call this base home, and their accommodations, spread out over 817 residential acres, are a far cry from the bland, cinderblock barracks one might expect.

Everyone who lives on the base is given a Basic Housing Allowance (BAH) based on rank and number of dependents. The higher your rank the more substantial your BAH, which means senior officers get first dibs on the upper-end units. These include four-bedroom, single-family homes with two-car garages, decent-sized lots and maybe a backyard deck or sun room.

Things haven’t always been so inviting. Base housing got a major facelift in 2006, when the Marlton-based developer United Communities was contracted to replace more than 1,900 of the 2,300 military houses here, while also renovating close to 500 additional historic residences. Prior to that, building and maintaining military housing was the job of the Department of Defense, and it wasn’t something the department did particularly well.