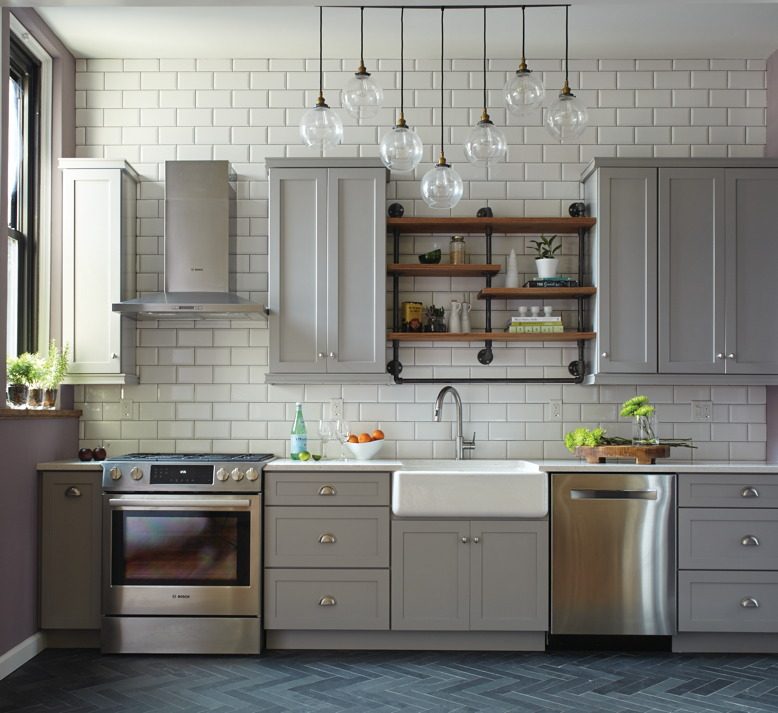 Stephanie Kingpetcharat and her husband, Damian Norman, moved into their two-bedroom Hoboken apartment five years ago. They loved the high ceilings and the natural light that poured into their new home. But the kitchen? “It was dark and dated and cramped,” says Kingpetcharat.

For help with the space, they turned to Robert Jenny, principal of Robert Jenny Design and an expert at adding personality to apartment-sized kitchens. His challenge: to transform the space into a light-filled, edgy, but practical kitchen. “We wanted to make it more open,” says Kingpetcharat, an arts administrator.

The building, a former elementary school, had been gut-renovated in 1996, but still has charming details, including exposed-brick hallways, plenty of windows and a center courtyard. And it’s all just 10 short blocks from the Hudson River.

To add width to Stephanie and Damian’s kitchen, Jenny removed the wall between the old kitchen and the living room. It’s still a galley kitchen, but now has a more open feeling. “We had to be very precise how we used every inch of space,” says Jenny.

Since an entire wall of cabinets was lost in the renovation, Jenny made up for lost space with new 36-inch-tall, custom, ash-grey cabinets. The old ones were a mere 24 inches high. “We have so much storage now,” says Kingpetcharat. “I don’t know how to fill the cupboards.”

The mix of new materials is unique. The floor is black slate, with individually cut pieces arranged in a herringbone pattern. There’s an enormous cast-iron farmhouse sink, something that was on Kingpetcharat’s wish list. The stainless appliances have an industrial quality, as does the stainless hardware. For the backsplash, Jenny used 4-by-8-inch white subway tile—bigger and more dramatic than standard 3-by-6-inch tile. The tiles have a beveled edge, which, Kingpetcharat says, reflects the brick of the original school building. “It brings back the old charm and memories of the school,” she says. Dark-grey grout adds contrast.

The most unusual element is custom-designed open shelving that uses exposed pipes to support walnut-stained oak planks. “I thought the use of the industrial pipes to build the space-saving shelves was a good reminder of the age and history of the building,” says Jenny.

Other design elements are straight off the rack. The walls are painted a subtle mauve (Benjamin Moore Sleepy Hollow #1454 in flat). The light fixture—glass globes hung at differing lengths—is from Restoration Hardware.

Norman, a web developer, worked at home during the project and watched in awe as the entire renovation took place in just four weeks. “It was very fast,” he marvels.

Now the two have just what they wanted: a more accommodating but distinctive space. “We can fit in the kitchen together now,” says Kingpetcharat. She admits they don’t cook a lot, but when they do, they like to experiment with traditional foods from her native Thailand or his native England. “We’ll try a Thai curry or a Yorkshire pudding,” she says.

“It just functions so much better now,” adds Norman.

A bonus: The couple’s cat loves it too. “She goes in every night and sits on the slate floor,” says Kingpetcharat. “She used to feel too trapped, but now she loves the space.”