Perched alongside the Navesink River, the Molly Pitcher Inn has long been the center for culture and social activity in Red Bank. History suggests her most glorious period was 1968–1980, when many of the world’s most celebrated entertainers savored her hospitality between performances at the nearby Garden State Arts Center.

My father, Frank Monica, was the hotel’s general manager and host back then; I was executive assistant manager. We catered to such luminaries as Bob Hope, Jerry Lewis, Tony Bennett, Johnny Mathis, the Beach Boys and many more. Every week brought new challenges.

[RELATED: What I Miss Most about New Jersey]

Like the time composer Burt Bacharach and performer Anthony Newley arrived together. Bacharach required a freshly tuned piano in his suite, and Newley demanded to be in the room adjacent to Bacharach. Newley, a hypochondriac and insomniac, appeared in my office one morning complaining that the window air conditioner kept him awake. An open window only added the clatter of other air conditioners. First, he demanded I order all AC units be turned off. When I demurred, he changed rooms several times in search of a quieter location. Each time, Bacharach was also moved, requiring the piano to be relocated and, yes, retuned.

Victor Borge arrived aboard his yacht. A sweet man, he came to me requesting a vehicle to go grocery shopping. Objecting to a rental, I loaned him my beat-up old 1960 Ford Falcon. Grateful, he headed out to the parking area. It took 30 minutes before he returned, disappointed and confused, asking, “Excuse me, young man, what exactly is a Falcon?”

The Arts Center’s grand opening in 1969 featured a concert by legendary pianist Van Cliburn. Dad introduced me to Cliburn, interrupting his practice on the ballroom’s grand piano. To my surprise, Cliburn apologized for “making such a racket.” He was a modest and kind gentleman.

At the town’s bicentennial celebration gala in 1976, my wife and I danced to the music of Red Bank’s own Count Basie as he led his 14-piece orchestra—playing the very same piano that Cliburn had used seven years earlier. 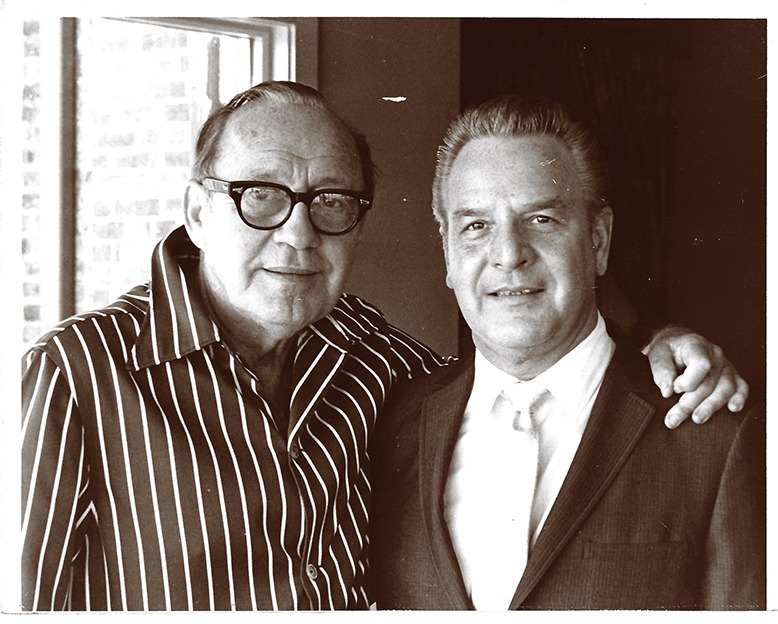 Jack Benny, above, gave Monica a squeeze (but no kiss). Courtesy of Bob Monica

Our two favorite celebrities were Jack Benny and George Burns. During his visit, Benny agreed to a publicity picture with Dad. While staging the photo, the comedy legend squeezed my father tightly, prompting Dad to ask, “Are you going to kiss me?” Benny replied, “Absolutely not! Unless you want me to.”

Burns had a passion for entertaining and did so at the drop of the cheesy golf hat he wore to conceal his baldness. One Sunday morning, I witnessed his encounter with a table of 20 blue-haired ladies enjoying a Communion breakfast. They beckoned to him, and he responded with a 40-minute routine.

Dad passed away in 2014, and most of the great stars are gone as well. Today, the Molly stands as a testament to past glories, now catering to a new generation.