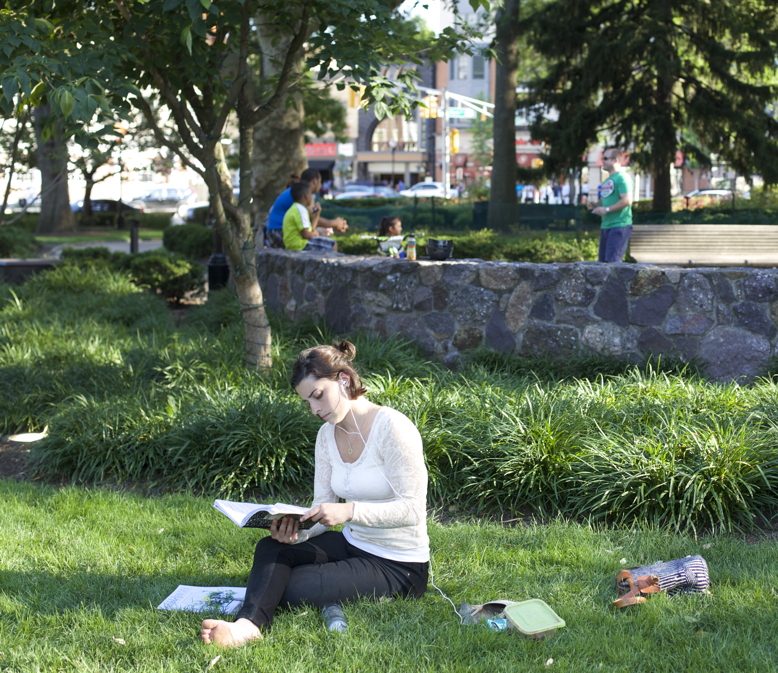 A resident reads on the Morristown Green.
Photo by Laura Baer

The Morristown Green, established in 1715, is the heart of downtown, and adjacent South Street its main artery. You’ll find Revolutionary War landmarks throughout town and a National Historic Park, Jockey Hollow, where Washington’s troops shivered through the frigid winter of 1780, just to the south.
By day, South Street draws the local lunch crowd; at night, the area booms with out-of-towners who mingle at such watering holes as Sona Thirteen, Iron Bar, Grasshopper, Tashmoo, Hops and the Famished Frog.

The downtown is so walkable, the Morristown-based Seeing Eye has used it as a living classroom for guide dogs and their blind companions for more than 50 years. Jim Kutsch, president and CEO of the Seeing Eye, and his wife Ginger, are both blind and happily call Morristown home. The “no car, two-dog family” walks everywhere. “I really haven’t been able to do so much on foot since I was on a university campus,” says Kutsch.

Morristown has a proud history of caring for the needy. Downtown includes numerous soup kitchens and the historic Market Street Mission shelter, established in 1889.

WHERE TO EAT: Restaurants have helped revitalize Morristown. Two side-by-side staples are Roots Steakhouse and Urban Table, owned by the Morris County-based Harvest Restaurant Group. The hottest ticket is Jockey Hollow Bar & Kitchen (JHBK), a NJM Top 25 restaurant featuring daily $1 oyster happy hours. For breakfast, grab a quiche at the Artist Baker, and for dessert try housemade ice cream and gelato at the Creamery. For a late snack, it’s worth the wait at Rauls Empanadas Town for their savory (or sweet) deep-fried treats.

WHERE TO SHOP: The four-story Century 21 is a rare downtown department store (and a discount one, at that). Women’s boutiques include Willow Street (also in Summit), Boutique 161 and the Dain Shoppe, a lingerie store.

THEN AGAIN: Street parking fills up fast, but there are several convenient parking garages.