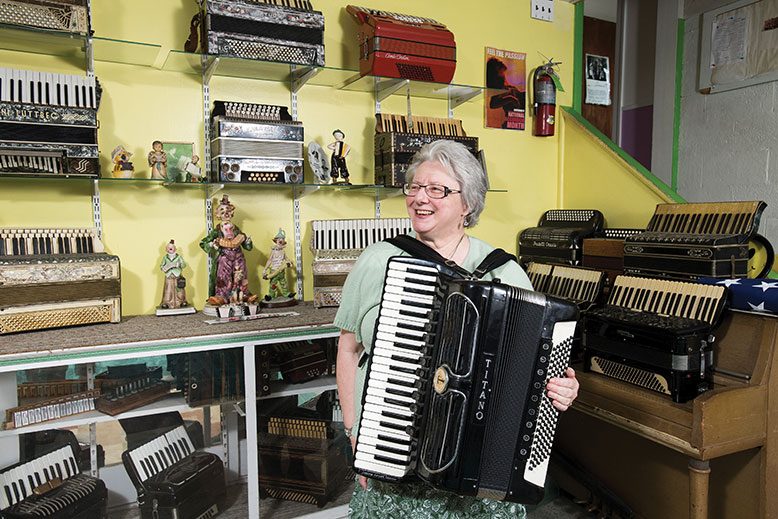 Joanna Darrow has picked up where her late husband left off, teaching their favorite instrument at Acme Accordion School. “It breathes,” she says of the once-trendy squeezebox.
Photo by Rebecca McAlpin

For Joanna Darrow, the accordion is more than an instrument. She describes it as “an extension of your soul and your whole being.” Darrow teaches accordionists of all ages at the Acme Accordion School, a 70-year-old institution in Haddon Township.

Darrow’s late husband, Stanley, opened the school in 1948, at a time when interest in the accordion seemed to be at an all-time high. “It was the rage,” says Darrow. “Even bigger than when the guitar came through.”

The accordion was squeezed out of fashion in the 1970s, but Stanley was undeterred. “He believed in the accordion,” Darrow says. “As other accordion studios around us closed up, we ended up getting the overflow of the people they could no longer take care of.”

Today, the Acme Accordion School is decorated with old photos of Stanley and his students and ensembles. There are several practice rooms and a large rehearsal space in the back. Vintage accordions are on display, including one made by the now defunct Acme Accordion Company, for which the school is named. Darrow and two other teachers lead ensembles, orchestras and group lessons every week. Lessons for beginners run $30 per half-hour session. As they progress, beginner students can play in a group for no additional charge.

Darrow, who has performed several times with the Philadelphia Orchestra, is looking forward to National Accordion Month in November. To celebrate, her school plans an annual all-day festival of concerts on the first Sunday in November and concerts throughout the month.

The accordion is, perhaps, somewhat misunderstood, but Darrow has a wonderful way of explaining the instrument, which dates to the early 19th century. “It breathes,” she says. “It works on an air-production system. So you’re controlling the sound by controlling the air the same way a singer would. Though you’re not singing, you’re developing it through your hands, arms and your whole body. And it vibrates.”