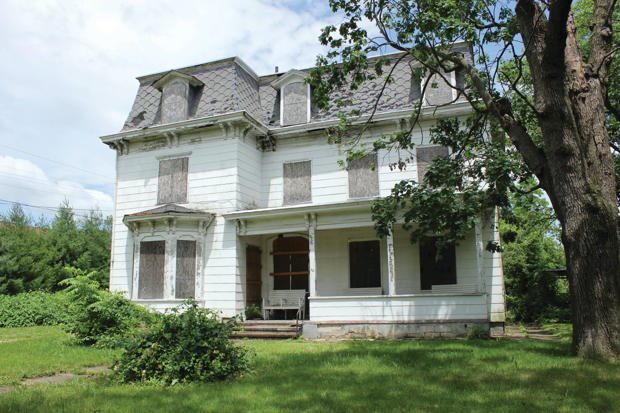 On Shaky Ground: The one-time home of Thomas Fortune is in danger of demolition.
Photo by Lisa Hagen/Star Ledger

When T. Thomas Fortune came to Red Bank in 1901, a local newspaper headline read: “Well-Known Colored Man Moving to Town.” As a journalist and founder of the National Afro-American League, Fortune was a highly regarded voice for racial equality. His newspaper, the New York Age, was a platform for his militant agenda.

Today, Fortune is overshadowed in history by contemporaries such as Booker T. Washington and W.E.B. Dubois, but the 12-room Red Bank home in which he lived and worked is still making headlines. Since June 2007, when the boarded-up home was listed by Preservation New Jersey as one of the 10 most endangered sites in New Jersey, area residents began working to buy and preserve it.

“The preservation of the house resonates with me,” says Gilda Rogers, a local author and committee member of the T. Thomas Fortune House Project, a preservation movement. “It represents what I believe is the duty of the writer—to give a voice to the voiceless, and that is what Thomas Fortune did. He was pivotal in local and national history.”

Saving the Fortune house is no simple task. Last September, the Vaccarelli Family, which has owned the home for three generations and once operated a bakery on the premises, applied to the borough of Red Bank for a demolition permit. The preservation committee appealed for a stay of the demolition and is attempting to raise money to purchase the home. It has been on the market since July 2011 for about $1 million.

Plainfield-based preservation consultant Peter Primavera estimates that another $2 million will be required to preserve the house and convert it for future use as a cultural and learning center. To date, the preservation effort has raised $10,000.

Mark Fitzsimmons, a preservationist architect, calls the Second Empire-style home “the sole such landmark in New Jersey associated with African-American history.” The house was added to the list of National Historic Landmarks in 1976 and to the Register of Historic Places in 1979. Key supporters of preservation include area African-American churches; the Red Bank Men’s Club Foundation; state Senator Jennifer Beck; and local government officials.

Fortune, born a slave in Florida, lived in the home from 1901-1908. He died in Philadelphia in 1928 at the age of 71. Among other achievements, he is credited with coining the term Afro-American.