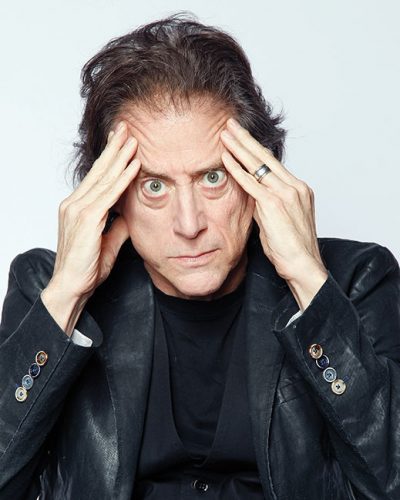 Richard Lewis came of age in Englewood, but the veteran comic insists he wasn’t raised in New Jersey. Rather, he quips, “I was lowered in New Jersey.” Still, the 68-year-old actor/comedian, a 1965 graduate of Dwight Morrow High School, has a soft spot for the town of his youth. He talked to New Jersey Monthly about his formative years and his latest role as a psychiatrist in the new Starz comedy series Blunt Talk, which stars Patrick Stewart as a drug-abusing British newscaster who hosts a Los Angeles talk show.

New Jersey Monthly: “I was raised by wolves” was your catch phrase during your early days in comedy. How bad was your childhood?
Richard Lewis: It was pretty bad. I didn’t see my father much. My dad was such a successful caterer that he was booked on my bar mitzvah—and I had my party on a Tuesday. Talk about low self-esteem. My father died young and my sister and brother moved out by the time I was in junior high. So it was me and my mother, and we didn’t get along too well. She didn’t get me.

NJM: What didn’t she get?
RL: Everything. Before I played Carnegie Hall in 1989, I performed at the Plaza Theater in Englewood. I did a two-hour show. My mother showed up early in the lobby and said to fans, “I’m Richard’s mother.” During my set I joked that my father had 12 heads. My mother stood up and said, “That’s a load of crap.”

NJM: Did your mother behave at Carnegie Hall?
RL: I had to make a tough call. I told her that her presence would interfere with how I thought, since I would visualize her there. I told her that she couldn’t come, and she didn’t. She stayed back in Jersey.

NJM: Why did you loathe Larry David, who is now your best friend, when you were growing up?
RL: We were archrivals as teenagers at a summer sports camp. Our issues started at birth. We’re three days apart, and we were both born in the same Brooklyn hospital. I’m convinced that Larry tried to strangle me with my mother’s umbilical cord. I was a good athlete. Larry was a gangly, obnoxious asshole. I hated him. We became friendly years later as young comics in New York, but I noticed something one night. “There’s something about you I hate,” I told him. “Wait, you’re that Larry David from summer camp.” And he said, “You’re that Richard Lewis.” We nearly came to blows.

NJM: Ironically, you play a psychiatrist on Blunt Talk.
RL: It is ironic, considering all the therapy I’ve had. I work with a brilliant bald man, Sir Patrick Stewart. I find these bald geniuses like Sir Patrick and Larry, and I get great work.

NJM: What was the most surreal moment from your childhood?
RL: Many Yankees rented houses on our block, Van Nostrand Avenue. The most surreal moment was when Mickey Mantle drove up, and I was wearing a Brooklyn Dodgers shirt, and he said, “Hey kid, why are you wearing that shirt?” I walked away shamefaced, but as an adult I became good friends with Mickey. You look at who I became friends with and it’s pretty amazing. I never could have guessed it would have turned out this way. As a child I stood on the roof of my house and looked out at Manhattan and wondered what was going on there. I went down on the street and kids were selling lemonade, and it hit me that there’s got to be more to life than this. I was right.