Tyler Hall, 34, the director of instruction at Upper Montclair Country Club in Clifton, won the New Jersey State Open Golf championship today for the second year in a row. In becoming the first repeat winner in about 20 years, he also did something no one has ever had the opportunity to do in the 95-year history of the state championship—win it on a public golf course.

That course, Galloping Hill in Kenilworth, has come a long way since 2007, when Galloping Hill and its two sister courses run by Union County, Ash Brook and Oak Ridge, were losing about $500,000 a year. In a series of bold moves, Union County closed Oak Ridge after the 2008 season and eventually committed $17.6 million in bonds to turning the swampy, 27-hole Galloping Hill, built in 1928, into an 18-hole championship course. The new Galloping Hill would, for the first time, have a driving range and extensive practice facilities. It would also have a capacious new clubhouse with bar and restaurant (and catering facilities that would earn money for the county). Eventual winner Tyler Hall hitting his second shot on the par 4 9th…out of the thick nasty stuff. He put the ball on the green. Photo: Eric Levin

That is a very simplified summary. (For the full story, from 2013, click Galloping Hill’s New Giddyap.) The capper, though, is that the complete renovation of the course and the upgrading of the entire facility convinced the New Jersey State Golf Association to move its headquarters into the new clubhouse and, more importantly, commit to Galloping Hill as the site of the 2016 New Jersey State Open.

Every year since 2008, Union County residents and ordinary golfers from near and far have, season by season, witnessed an amazing transformation of the course.

Thousands of trees were removed, opening up sight lines and, more to the point, improving turf conditions. Greens, tees and bunkers were rebuilt or redesigned (or added or removed) in a massive upgrade that had begun with veteran New Jersey golf architect Stephen Kay and continued with the august Montclair firm of golf architect Rees Jones.

Galloping Hill is well named. At 6,845 yards, it is not especially long by tournament standards today, but it has hills, lots of them. If you walk it, you get a workout. As a golfer myself, I can say it has no boring holes, no holes that don’t require precision and strategic thinking, no holes that exact no penalty for bad shots, no greens that are as simple as they might appear (and some that look just as daunting as they are). Credit superintendent Russ Harris, Union County Golf’s director of grounds, and his tireless crew with preparing all the turf in play—tees, fairways, rough, bunkers, greens—to true championship standards.

The course was designed by Englishman Willard G. Wilkinson, a vice president of A.W. Tillinghast’s firm, he worked with Tillinghast on Baltusrol and Winged Foot before going out on his own.  Galloping Hill has several holes that are simply unlike any others, none more bizarre than the literal roller coaster of steep swells and deep valleys that is the par 4 14th.

“Fourteen is the stuff of nightmares,” Hall told me after the round. “One of my buddies tried to qualify here for this tournament last year. He was going along even par, and I think he walked off 14 with a 12. So it was in my mind.”

I watched the final group play the back nine of the final round today. If you know golf, you know that the final pair on the final day are the two players with the lowest score and therefore the greatest chance to win. Today’s final pair were Hall, the eventual runaway winner, and Jeremy Nevius, a college golfer and a member of Metuchen Golf and Country Club, who ended the tournament as the low amateur in the final field of 50 golfers. Hall, right, and his final round playing partner, Jeremy Nevius, who was the low amateur in the field, congratulate each other after the round. Photo: Eric Levin

Every ordinary golfer (which is to say 99.9 percent of all golfers) struggles and suffers, sometimes over every shot. But we love the game and exult in little victories. A drive that reaches and rolls to a halt in the fairway. An escape from a greenside bunker that lands on and, more important, stays on, the green, sometimes rolling close to the hole. A long putt sunk. No matter whether for birdie, par or bogey, a long putt sunk, especially if it’s a long curling putt, a breaker or double breaker, is something to treasure. And we try to keep such small victories in mind when we tote up our final score and find it not nearly as good as we think we are capable of yet a little better than it might have been had this or that shot not worked out as well as it did.

I drag you through that recitation, which every golfer carries on a repeating loop deep in his smitten golfer’s soul, only to give you some sense of how amazing and awesome it was to see this tough course played the way it was meant to be played. Or the way only expert golfers, with power and precision beyond our wildest dreams, can play it. And let’s face it, these New Jersey state open competitors are not on the PGA Tour. They are not the best in the world. Which just makes you realize the levels of the game that stack like ziggurats of poker chips over our heads as we stand over the ball and prepare to strike it. Better not to think of such things.

We watch golf on TV, the pros make it look easy. All the golfers I saw today at Galloping Hill, even those far out of contention, have enviable games.

But consider the winner, Hall. It’s not like he never got himself into trouble. His drive on the par 4 9th hole wound up in what golfers call “the crap,” thick brush and who knows what, well left of the fairway. Somehow he not only hacked the ball out of this knee-high stuff, he put the ball on the green, 80 yards away.

On the 12th, a relatively short par 4, his drive landed at the front edge of a right-side fairway bunker. Very tough to lift the ball out, let alone send it about 150 yards, landing softly at the throat of the green.

The 12th gives ordinary duffers like me plenty to worry about. Carrying the drive over some wetland. Staying in the fairway, not going left into the woods or right into a fairway bunker or out of bounds. But I was surprised that, after the round, when I asked Hall what holes stick in his mind as special, he cited 12. I thought he would have considered it fairly straightforward.

“Twelve is probably one of the best holes in the state of New Jersey,” he said. “It’s not that long, but it’s just challenging enough, and you have the hazard [woods] left and the hazard [bunkers] right. I didn’t think I could get it over the lip of that bunker. It’s just one of those holes that kind of handcuffs you.”

On the crazy 14th hole, he had to hit his second shot down in one of the valleys, in thick rough, where he could not even see the green, yet that’s where his ball wound up. Far from the hole, and well above it, not where anyone wants to be. Yet somehow he two-putted to save par. Hall executes an extremely difficult escape from the front edge of a fairway bunker on the 12th hole. His ball wound up at the throat of the green. He chipped close to the hole and had an easy putt for par. Photo: Eric Levin

A par five means, if you do things right, you land your ball on the green in three shots and hole out in two putts. For par. Hall’s second shot arced into the sky like a rocket and very nearly landed on the green. But it hit the raised hump at the right edge of the green and bounced back into a greenside bunker. 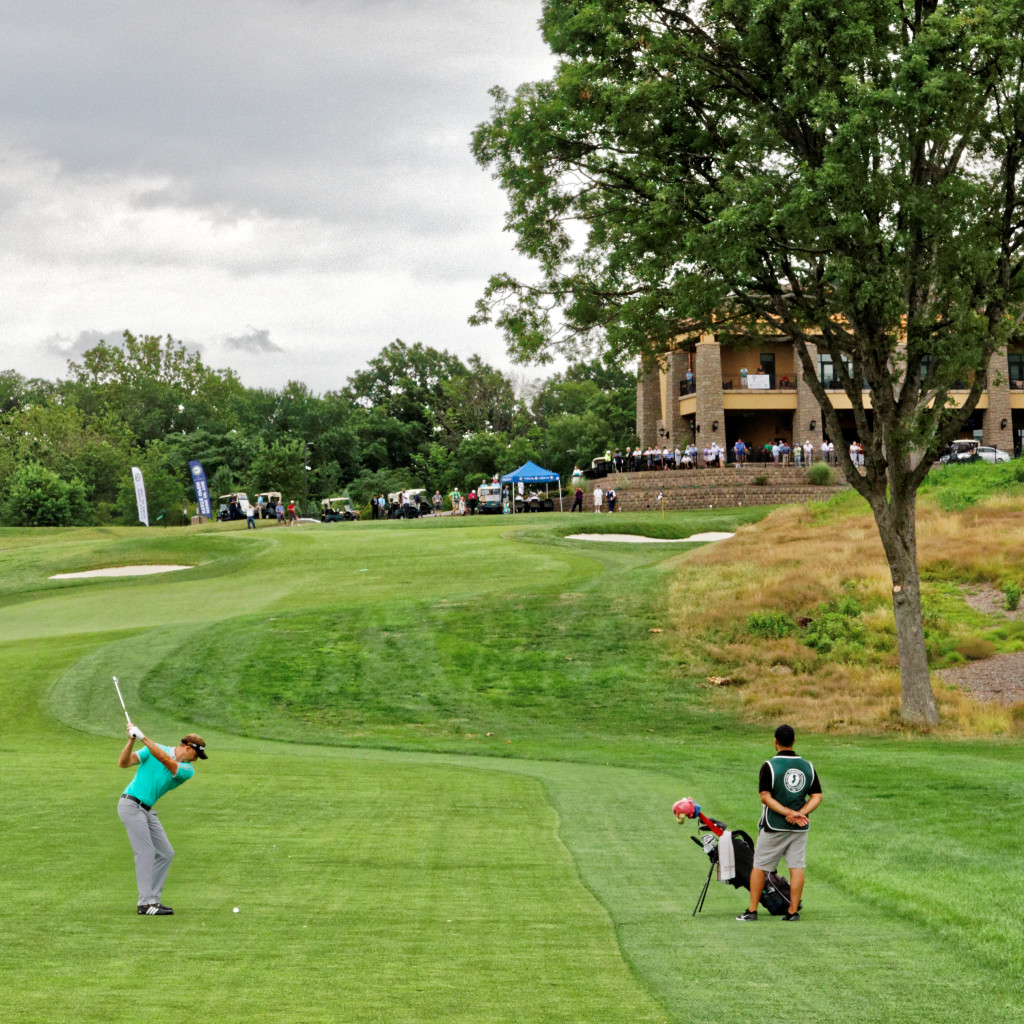 From there he made one of the most amazing shots I have ever witnessed in person, as opposed to on TV. He fired out of the sand and his ball ended up no more than two inches from the hole. Which is to say two inches from an eagle, a dead-sure two-inch gimme putt for birdie. Yes, his lead was already so secure (six shots at that moment, before he tapped in for birdie) that there was no pressure. But what a shot he made out of the sand, and what a finish. With victory assured, Hall rallies the crowd before tapping in his birdie putt on 18. Photo: Eric Levin

Hall finished at 15 under par. Alexander Hicks, a pro, finished second, at 8 under; then Brent Studer, another pro, at 7 under; then Nevius, the low amateur, and Richard Terga, a pro, tied at 6 under. Out of the 50 players who made the cut and played all three days, only four others finished under par. Galloping Hill bent, but did not break.

Hoisting his trophy later, Hall declared, as cameras snapped and video rolled, “There is no better golf course in the state of New Jersey than this one we’re standing on.” Hyperbole, given that New Jersey claims Pine Valley, Baltusrol, Ridgewood and many other superb and venerable clubs. But give the guy a break. He had just won a state championship.

It was a long time coming. But I suspect it won’t be Galloping Hill’s last turn in the spotlight. Armando Sanchez, Union County’s director of golf operations, who has directed the resurrection of the county’s golf program and of Galloping Hill, says he’s rolling up his sleeves and getting to work on snaring another big tournament for the flagship course.