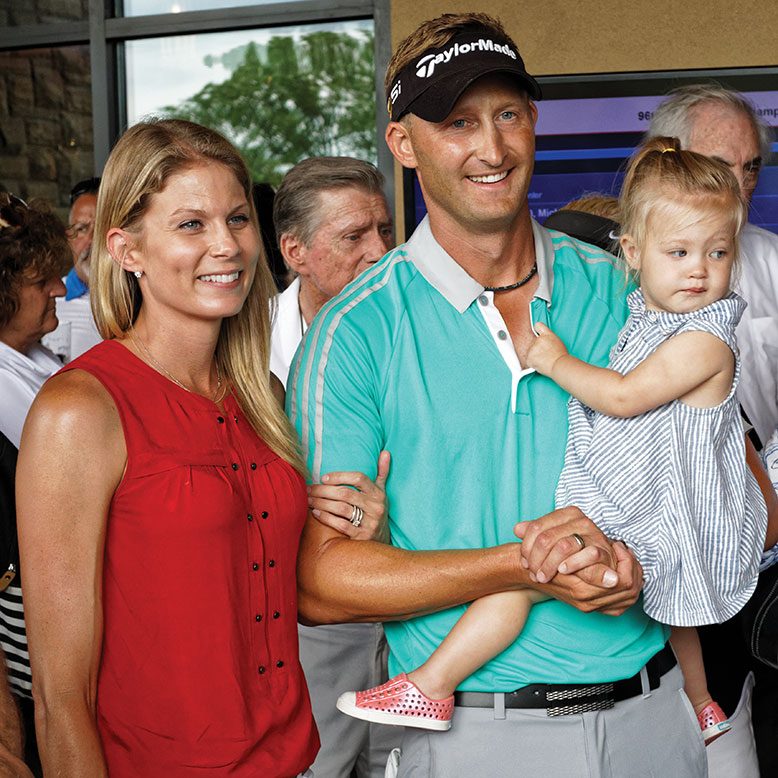 Top golfer Tyler Hall with wife Brianna and their daughter, Finley. Although he’s no longer on the pro tour, Hall still has ambitions to compete in the majors.
Photo by Eric Levin

Tyler Hall didn’t play golf until he was 16. He was a baseball player intent on being a big-league pitcher. His father, Larry, was the golfer in the family, a former pro, and the younger Hall would caddy for him on weekends. That is, until 1996, when Hall caddied for his dad at the U.S. Amateur Championship and watched 20-year-old Tiger Woods win a third consecutive title.

“I saw Tigermania firsthand and thought, Wow, you can really make a living with this golf thing,” Hall recalls. “I never touched a baseball glove again.”

With his father’s help, Hall went from a 28 handicap to a 3 in just three months. He starred at Wayne Valley High School, then played at the University of Kansas, graduating in 2004. After 10 years on the PGA Tour, Hall called it quits after the 2014 season. The following year, his wife, Brianna, gave birth to their daughter, Finley.

Hall, now the director of instruction at Upper Montclair Country Club in Clifton, still has competitive goals. He wants to become the first golfer since 1929 to win three consecutive New Jersey State Open Championships; the tournament takes place July 11 to 13 at Metedeconk National Golf Club in Jackson. Hall, 35, won the tournament in 2015 and 2016. He thinks his chances for a three-peat are good.

“My driving and my iron play are definite strengths,” says Hall, “but I think what carries me as a good, competitive golfer is the experience of having played for so long at the highest level against the best in the world.”

Hall also wants to qualify for two tournaments he missed while on the PGA Tour. He hopes to make the U.S. Open through local and sectional qualifiers, and the PGA Tour Championship by earning Class-A Professional status and finishing in the top 20 at the PGA Championship.

“I still have very lofty playing goals,” says Hall. “I’m just going to take a different avenue to get there.”