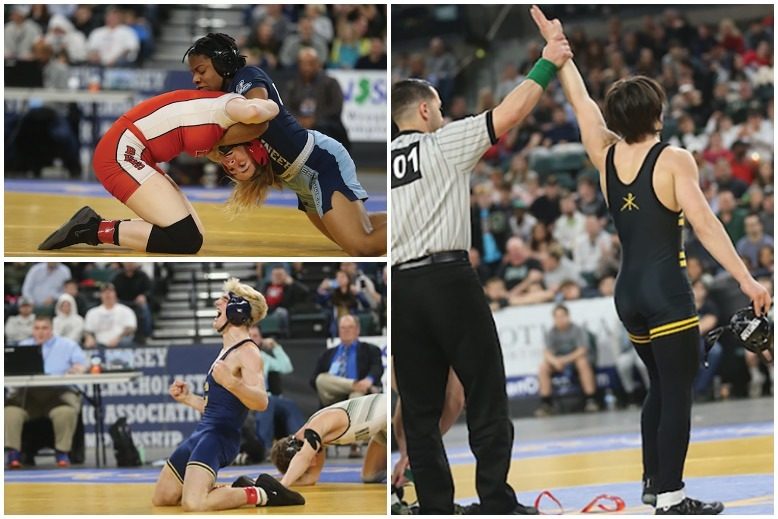 Wrestling season was in high gear before Covid-19 put the brakes on all competition. Clockwise from top left: Jess Johnson of Manalapan (in red) tangles with Precious Opara of West Orange during the state wrestling finals in Atlantic City; Dean Peterson of St. John Vianney celebrates a victory; Andrew Clark of Collingswood exults after a win. Photos by Chuck Solomon

There is no Waldwick High School football team anymore.

Waldwick, a borough of 10,207 in Bergen County, joined forces with its neighbor and former rival Midland Park, population 7,265, in 2006 to field players for a football team that competes under a unified banner and a single nickname: the Warriors.

Waldwick is the lead organization, according to the New Jersey State Interscholastic Athletic Association, so its name goes first.

“Early on, we would say, ‘Waldwick Warriors,’ and our cheerleaders would say, ‘Go Waldwick,’” says Kevin Carroll, Waldwick’s principal and former athletic director. “Then we had to adjust.” Now it’s just plain Warriors.

The proliferation of such co-op programs mating teams from multiple municipalities is just one of several developments changing the landscape of high school sports in New Jersey. Club play is another game changer, as is the controversy over concussion protocols in contact sports.

Co-op programs have been a reality in northern New Jersey for years, due to the large number of financially challenged small school districts. With school budgets under growing pressure, they have sprung up in almost every sport.

For the players on the field, co-ops are not necessarily an issue.

“From my point of view, it’s really fun,” says C.J. Vingoe, who played for the Warriors and attended Waldwick before graduating in June. “In high school, and even in middle school, you are introduced to new kids and new faces. You have more friends and, in football, we consider ourselves brothers.”

But for parents and other fans, co-ops can be a bitter pill. How does a single community rally behind a team when the team isn’t solely made up of kids from that community?

“I think every school wants their own student athletes,” says Colleen Maguire, COO of the NJSIAA.

“It’s definitely easier for the kids to buy in early on,” says Waldwick’s Carroll. “Adults have to realize, without each other, we don’t have a football team. We barely have a wrestling team. We went to the state championship in football two years in a row, and the likelihood of that happening without each other is not reality.”

Co-op programs are also common in ice hockey—so much so that Maguire says the NJSIAA will likely create a separate state championship bracket for merged programs. In fact, it’s not uncommon to have three schools partnered in what is called a tri-op; in rare cases, four schools have merged their programs. Of course, ice hockey is unique. Ice time is expensive, parents generally underwrite the cost, and the player pool is limited.

In some cases, co-op arrangements seem like too much of a good thing. Consider former Bergen County rivals Park Ridge (population 8,786) and Emerson (7,643), which share teams in eight different sports and have been partners since 1989. The Emerson/Park Ridge wrestling program has become one of the best in New Jersey, winning the Group 2 state title in 2016 and two of the last three sectional titles.

The NJSIAA has taken steps to maintain competitive balance and created a committee to examine whether or not schools truly need to combine.

“We have put checks and balances in place,” says Maguire. “The committee [that approves co-ops] is a good mix of athletic directors and superintendents, and they have denied some. It’s not a rubber stamp anymore.”

Of greater concern for some observers is the growing prevalence of club play in many sports.

The best players in almost every sport pay to participate in private, unregulated club teams. The teams travel across New Jersey and beyond to compete in tournaments and college showcases for recruiters.

“It’s specialization and big money,” says Benjie Wimberly, a state assemblyman from Paterson and head football coach at Hackensack High School in Bergen County. For the clubs, he says, “there is a lot of money to be made in those kids.”

The result is a struggle for talent between clubs and high school teams. High school sports offer tradition and local spirit. Club sports can tout elite competition and, in many cases, better coaching. Players and their families are often placed in a delicate situation when seasons run concurrently. They can pledge loyalty to the high school team, or follow the club path in pursuit of college scholarships.

“I think the high school world is great for players who really enjoy the sport, but don’t want to play at the next level,” says Lindsay Lafferman, Pequannock Township High School girls’ lacrosse coach and director of the Jersey Thunder lacrosse program. “High school athletics fills a great void, and it’s a great way to expose high school and middle school kids to one another, but I think that club allows them to take it a step further.”

Montclair High School girls’ soccer coach Ashley Hammond has had a foot in both worlds for over 20 years. He leads a club organization (Sport Domain Academy) while coaching the high school squad.

“The standard of competition in club soccer is much better,” says Hammond. Still, he prides himself on approaching both types of teams with the same competitive mindset.

The NJSIAA doesn’t formally acknowledge any club programs, and Maguire contends that kids have a better experience playing for their hometown school than a random private club.

“Kids will always come back to high school sports and play with their friends and neighbors,” she says. “No friends are going to see their club lacrosse tournament, no neighbors are going to see a club soccer game. Club programs don’t have trophy cases, alumni games and halls of fame.”

Some scholastic coaches and trainers warn that club play encourages one-sport athletes and year-round workouts. Research—including a 2016 study funded by the National Federation of State High School Associations—indicates that such specialization can put young athletes at risk for overuse injuries and emotional burnout.

Club play is not a factor for high school football, but football has its own issue to deal with: the national attention to the game’s inherent concussion danger. For football, it’s the elephant in the room. John Jacob, commissioner of the New Jersey Football Coaches Association who most recently coached at Wayne Hills High School, believes football participation is cyclical. He notes that pro football has addressed its concussion controversy, and media attention is fading. “The further removed we are from that controversy regarding the lack of oversight on concussions in the NFL, the better off we are,” says Jacob. “It was a stain on the sport, but I think [the NFL has] done the right thing to address those concerns and create new protocols that [high school coaches] follow today.”

The new protocols include an entirely new way to practice. Coaches now refer to “thud” practices. This means hitting a player, but never taking him to the ground. Some schools have completely banned contact in practice, including Ramapo High School, the team with the longest active win streak in New Jersey. Even for game play, students are taught rugby-style tackling, from the side, not head-on.

While participation levels may have declined, interest in football has seemingly never been greater. Jacob calls it “the most consumed American product.”

Game play has also changed. Football is placing more emphasis on skill and speed rather than muscle and brute strength. Even in high school, teams play at a faster tempo and spread their players wider to create favorable matchups. (Ramapo is a pioneer in this strategy.) Score points. Have fun. Win the game.

“The game is not played in as much of a box as it once was,” says Jacob. “Offensively, generally the idea is to get the ball to your athletes in space.” He acknowledges that football is still “a physical game,” but notes that there is risk in any sport.

What does the future hold? With budgets strapped, co-op programs are almost certain to become more of a lifeline for small schools. At the same time, high school teams could start partnering with private clubs in an attempt to give players the best of both worlds: improved competition, but the chance to play with their friends and neighbors.

We could see high school sports become “flights,” with schools sponsoring varsity teams, but also elite teams that compete around the country, with no regard for the calendar. This could yield national tournaments, perhaps prodded by television revenue, in multiple sports.

New sports could emerge, as has been the case with crew and competitive cheerleading. We could soon see flag football, cycling, even electronic-game competitions. The NJSIAA has already had preliminary conversations about the latter.

Kids playing e-games would certainly be safe from concussions. But what about carpal tunnel syndrome? We’re not so sure.

Darren Cooper has been a local sports columnist for northjersey.com for the past 10 years.