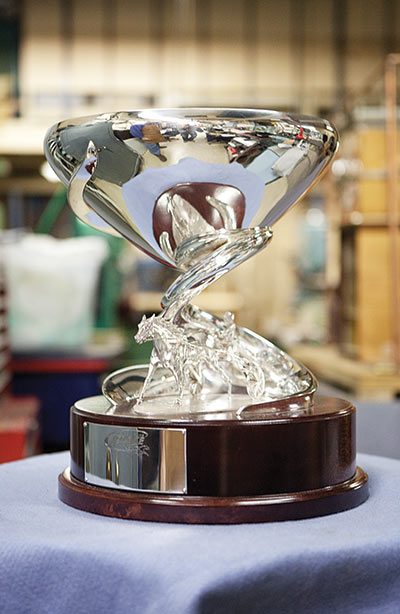 You don’t need a GPS, or even a street address, to find Ubaldo Vitali’s Maplewood studio. If you’ve got a little time, just drive through the streets of this Essex County town, past clapboard houses constructed when the last century was new, until you find a single-story building that looks as if a mischievous spirit had lifted it whole from the winding streets of some Italian hill town and set it here, vine-draped walls and all, to confound and delight passersby.  Ring the bell, and the mischievous spirit himself comes to the door.

Wearing a long, brown leather apron over faded jeans, Ubaldo Vitali—master gold- and silversmith, restorer, conservator, art historian, researcher, lecturer, and, most recently, recipient of a MacArthur Foundation “genius” grant—looks like a man with one foot firmly in the present and the other very comfortably in the 16th century.

So it isn’t entirely surprising when he refers to himself as an alchemist and assures you that he’s not speaking metaphorically. But don’t for a minute imagine that Vitali labors over bubbling vials, working to turn dross into gold; he’ll quickly disabuse you of that notion. “Alchemy was an important part of medieval, Renaissance and 17th-century life,” he explains. “It wasn’t just the transmutation of base metal into gold; it was the transmutation of the elements of nature into true art. You can take a piece of clay and by the power of the arts you can make it into pottery; you can take silica and make it into glass.  And that’s alchemy.”

By that definition, Vitali, 67, is an alchemist par excellence. He can turn silver to water (as in his Triple Wave Pitcher, a sleek vessel that seems to flow even when it’s sitting on a shelf) or ice (whose gleaming undulations Vitali captured in a 1984 coffee-and-tea service utilizing silver, ebony and ivory). His 1994 centerpiece for a private collector’s 50th-anniversary celebration appears to be a magical amalgam of bone and flower petals.

Like a true alchemist, he learned his craft at the feet of masters. He’s the fourth in a familial line of gold- and silversmiths—all Roman born—that began with his great-grandfather and namesake. He literally grew up in the studio. Vitali was four when he started accompanying his father and grandfather to their respective workshops; at 18, he completed his first commission, a gold pen and inkstand for Pope John XXIII, with which the pontiff signed his final, and most celebrated, encyclical, Pacem in Terris. While his peers were spending their afternoons at homework and part-time jobs, Vitali was doing conservation and restoration work for museums. During his last year in high school, his grandfather died and Vitali took over his workshop.

In a family that celebrated art—if they weren’t creating it, they were talking about it over dinner, visiting museums or attending lectures on art history—there was never a question that Vitali would be an artist. There also was a tacit understanding that he would work in the family business. That might chafe some teens, but for Vitali it was a kind of sacred trust. “My grandfather and I were extremely close—he was also a mentor and a great artist,” he says, “and from the moment I started to manage his shop, the responsibility became so important, so consuming, that I knew I couldn’t just be a freelance artist; I knew I had to dedicate myself to continuing his tradition.” (Vitali’s four grown children have followed in the tradition, too. Each is involved in the arts.)

Vitali doesn’t consign art and artisanship to two separate categories. “We compartmentalize everything, and it’s kind of sad,” he says. “I think Art is a big word, with a capital A, and it encompasses all creative work.” That philosophy was no doubt nurtured by the intellectual and artistic ferment that prevailed in Rome in the 1960s when he was a young man. “It was a very interesting time in history,” he remembers. “You crossed the street and you had a cup of coffee with Federico Fellini; you went to buy a newspaper and the person in front of you was the writer Alberto Moravia.”

Vitali’s wide-ranging interests and intellectual curiosity—which led him to study painting and sculpture at Rome’s Accademia di Belle Arti and architectural drawing at Universita La Sapienza di Roma—were also a factor in his nomination for the MacArthur grant by Ulysses Dietz, curator of decorative arts at the Newark Museum, who had commissioned several pieces from Vitali and, last year, curated a show of his designs at the Smithsonian’s Renwick Craft Invitational. “I tend to be restrained in my use of the word artist,” Dietz says, “but Ubaldo isn’t just an incredibly gifted conservator, he’s also a scholar and a brilliant designer—a genuine Renaissance man.”

Recipients of the grant—the 22 fellows in 2011 include the cellist Alisa Weilerstein, Rutgers historian Jacob Soll and Harvard physicist Markus Greiner—will be awarded $500,000 over five years to further their work in any way they see fit, no strings attached. To win the grant, they needed to fulfill three basic criteria: exceptional creativity, future promise based on a substantial body of work, and potential to use the fellowship to bring that promise to fruition. Nominees can come from any intellectual or artistic arena; the only restriction is that they be U.S. citizens.

In 1967, Vitali was on his way to accomplishing the latter distinction. He had just turned his back on la dolce vita to follow his future wife, Anita, an American and a fellow artist whom he’d met at the Accademia, back to her hometown of Newark. It was the summer of Newark’s infamous riots. Vitali was living in a YMCA in the heart of the city, but he was happy. “America represented an ideal for me of freedom of ideas, freedom of speech,” he says. “I felt I was at a crossroads of history.” Still, he was faced with the somewhat daunting task of translating his Old World talents to a very New World environment, and his first thought was to find a job working for someone else.

As it happened, Tiffany & Co. had a factory in the neighboring town of Belleville, and Vitali applied for a job there as a silversmith and as a designer at their Manhattan location.  But when the head of the factory saw his portfolio, he told Vitali he should open his own shop. It was a leap of faith that, for Vitali, brings to mind the well-worn incantation from Field of Dreams: “If you build it, they will come.”  And yes, they came, starting with Tiffany, followed by Cartier and Steuben and Movado and, eventually, Queen Elizabeth II, the Shah of Iran, an Italian prime minister, and presidents Richard Nixon and Ronald Reagan. Over the next decade and a half, Vitali, who lives in Glen Ridge, moved his studio five times, expanding his space with each move until, in the late ’70s, he settled into his current workshop, which he jokingly calls “my final resting place.”

Like Vitali himself, the workshop is a study in apparent contradictions. The back room is dominated by a stone furnace fed by an immense bellows, both of them constructed for a 2006 documentary on medieval metalwork for the Metropolitan Museum of Art. In another room, computers and microscopes sit side by side with a huge rolling mill that turns silver ingots into thin sheets. “It’s a misconception that to be a craftsman, you only use the standard technology.  Here, we’re using the oldest technology to the most recent,” he says, pointing out an oxyhydrogen torch that uses chemistry (not alchemy) to transform distilled water into a clean-burning flame. The works scattered about the shop also span centuries, from a 135-year-old, dollhouse-sized copper-and-silver model of Independence Hall that he’s restoring for a private collector, to a solid-silver cowboy hat he made for himself—he dons it jauntily to prove that it fits—after creating one for a client who planned to wear it to a mad-hatter’s ball.

With the help of his two assistants, Amrit Tamraker, a silversmith from Katmandu, and Anthony Cavaleri, who has worked with Vitali for three decades, Vitali has restored metal pieces from the fourth century B.C. and, for his own satisfaction, created strikingly contemporary works—like his 1999 Mondrian Bowl of patinated bronze and silver plate, modeled after an abstract painting by Piet Mondrian. As testimony to his professional time travels, he has hung a facsimile of the 1620 Magical Calendar—a compendium of magical symbols and their numerical correspondences—next to a copy of the periodic table.

Vitali plans to use the MacArthur grant to do some additional traveling back through the centuries, devoting some of the funds to unraveling mysteries that have presented themselves to him over the years, including identifying the as yet unknown masters behind some of the world’s greatest works of silver. He’d also like to delve into alchemy again, this time, he says, looking at paintings “to identify and interpret alchemical and other symbols that have been ignored by mainstream art historians to date.”

He feels that the MacArthur Foundation has conferred a great responsibility on him, and typically, Vitali embraces that responsibility with relish. “Considering what they’ve given me—their complete trust—I feel like I must produce 100 percent for the rest of my life,” he says. “I won’t disappoint them.”