Whatever camera you shoot, it’s how well you see that makes the picture pop. Since 2018, New Jersey Monthly and Unique Photo have invited readers to contribute their favorite images to the magazine’s ongoing exploration of life in the Garden State. Our annual Cover Search is open to amateurs, pros and students. The challenge: Create a photo, shot in New Jersey, striking enough to command the cover of the December issue.

Here’s how it works: From March 23 through September 30, submissions were accepted in eight categories: Architecture, Lifestyle, Landscape & Nature, Down the Shore, Wildlife, Aerial & Drone (new this year), Student, and Special (digital manipulations and specialties such as night, aerial and abstract work). In concert with Unique, we reviewed this year’s 1,204 submissions on the basis of originality, technical excellence, composition, artistic merit and relevance to life in New Jersey.

In the initial judging, we chose 182 finalists to submit to our expert judging panel (see bottom of this article). Using the same criteria, the panel chose the winner and runner-up in each category, and New Jersey Monthly and Unique Photo made the final decision on the cover winner and runner-up. Winners and runners-up won valuable photo equipment and gift cards from Unique Photo. For Anthony DiMatteo, setting up this shot was nearly as aerobic as playing basketball. The Bloomfield resident (who won 1st Place in Lifestyle last year) set his camera on a tripod about 60 yards from the hoop to position the setting sun for a seeming swish. Continually adjusting the zoom on his telephoto kept the size of the sun appropriate for the illusion as it descended. “I did that 60-yard dash about 15 times and was exhausted afterwards,” he says. His nephew Alexys Castro, meanwhile, had to stand in place and repeatedly simulate defense. There were many takes—his wife, Marcella, pressing the shutter on each one. On a summer evening, after hanging a black cloth on her clothesline and placing a flowering plant in front of it, Susan Chilkotowsky-Kain, a school secretary in Marlboro, did not have to wait long for hummingbirds to happen by in search of nectar. They were frequent visitors to her Marlton home. “They’re used to me being out there—they come to me naturally,” she says. “They’re territorial, so they come individually, not in flocks. They’re so beautiful.” Strobes froze the wings (moving at an astonishing 80 beats per second) as the bird gave itself what Jersey drivers cannot: a self-service fill-up. “I was bored,” Sara Ascalon recalls. Did the Woodbury Heights resident, a photo tutor, go to the mall? No, she dug into her skills. Following “a stream of consciousness,” she superimposed a picture she had taken of an animatronic dinosaur onto another she had made of a controlled burn at Black Run Preserve in Evesham. To explain the smoke, she layered flames into the dino’s jaws. “But the composition was unbalanced,” she says. Solution: Add photos of her cats, whose attention she had lassoed with a red laser pointer. The unity you witness here is achieved by the artful interlacing of 56 individual layers. Mike Carroll, who won the Architecture category last year, entered this picture in Special, which includes night photography. There seems to be plenty of light in the sky, but stars peep through. Carroll, who lives in North Arlington and handles scheduling for a limousine company, went to Island Beach State Park to shoot the Milky Way. He was about to pack up when, unexpectedly, this NASA rocket blazed by. “It was so big, I couldn’t believe how bright it was,” he recalls. “It was the most amazing thing I’ve ever seen in person, and people with me didn’t know what it was. It was so big and bright I thought, ‘Am I going to die?’ I had to do research afterwards to identify it.” “Most physicians pursue golf,” says Daniel D’Auria, a gastroenterologist who lives in Tabernacle, east of Marlton, in the South Jersey pinelands. “Not me. What they spend on clubs, I spend on photo equipment.” D’Auria puts out nest boxes on the acres of field that surround his house. “The birds, Eastern bluebirds, stay year-round, raise their fledglings, and we get the benefit of seeing them,” he says. “Watching mom and dad running around to feed their brood, I ran inside, grabbed my camera, probably used a 600-millimeter lens.” If you’re traveling from Canada to Mexico by air, South Jersey makes a nice layover. Every autumn it works just fine for bands of migrating monarch butterflies. Last year, Patricia Worley was waiting for them. A wildlife and nature photographer who lives in Medford Lakes, she blurred the background with a telephoto lens. “They were roosting for the evening,” she says. “They gather together to keep warm through the night. Then they cross Delaware Bay on their way south. If the winds are right, they can go from New Jersey to Virginia in six hours.” Down the Shore: 1st Place

After years producing websites, Frank Little has become a stay-at-home dad to his daughter, who is 17. Home is Cranford—but don’t take stay-at-home too literally. About six years ago, Little took up landscape photography “and fell in love with it immediately.” The challenge he set for himself here was to shoot a familiar subject, the Sandy Hook Lighthouse, in a novel way. He determined the time and day the sun would set precisely behind the structure. That, plus just the right type of cloud cover, and he hit the road. “You’re busy getting all the technical things done,” he says, “but finally, you can’t help but be awe-inspired by what you see.” Down the Shore: Runner-Up

Susan Allen, a digital engagement specialist at Stockton University in Galloway, surfs the ocean waves, but is also drawn to the Delaware Bay for its birds and horseshoe crabs. From her home in Fort Republic, northwest of Atlantic City, she drove down to the bay, where she found birds pecking at clusters of horseshoe crab eggs. Part of what makes this picture disarming is that it leaves the viewer groping for a sense of scale. These could be Christmas-tree ornaments. In fact, she says, “this cluster could nearly fit on your pinky fingernail. You have to get on your hands and knees and inspect super close to even notice them.” Sliding the wet eggs onto a sheet of glass on the sand, she shot with a macro lens. In the pandemic-chastened summer of 2020, the only place Kim Kuznetsov of Manville could find that was hosting fireworks was Toms River. The Verizon paralegal (and mother of four teenagers) headed for the site. “It was the blue hour,” she recalls. “The sky was perfect. Somebody yelled, ‘Did you see the rising moon?’ I didn’t realize it was coming up. It was just gorgeous. I got behind some grasses and focused on them.” This year, a friend encouraged her to enter the picture, but she forgot all about it until coming to her senses on the last day of eligibility. Peaceful is not the word that comes to mind when you think of Tropical Storm Henri, which came barreling up the East Coast in late August. But when Peter Monsees, a retired newspaper staff photographer, stepped outside his home in Wayne in the middle of the afternoon, his attention shifted from some deer across the street to the droplets on the glistening leaves of the Japanese maple in his front yard. “The light was weird, illuminating different parts of the tree,” he recalls. “But the leaves were spectacular on their own.” Down the Shore Everything is Alright

Chad Hoover, who lives in Whippany and works in sales, summers at his house in Seaside Heights. Having won the Shore category in 2019, he is no stranger to the strand. Setting up his telephoto on the Seaside Park beach at 6:30 am, he compressed three scenes into one: the women dancing in the foreground, the fisherman casting in the middle distance, and the amusement park in the distance (the latter two in Seaside Heights). “It sums up the Shore in one picture,” he says. By his side was his daughter, Elle, 7. They rode to the beach together on their bikes. 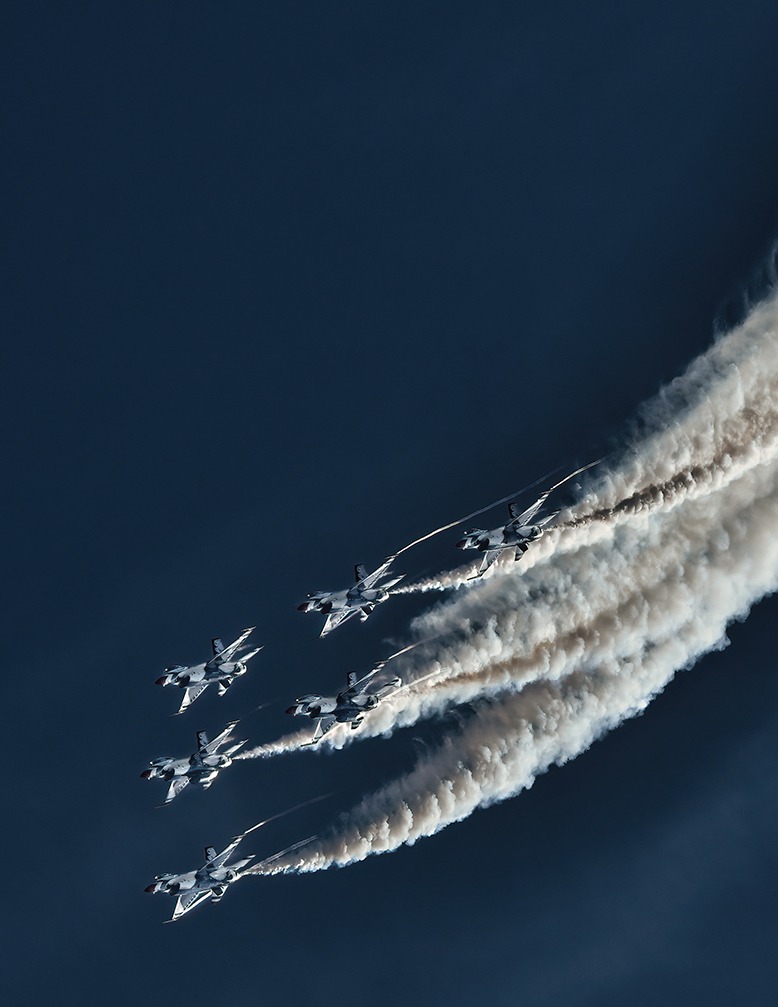 Two years ago, Dean Purdy, a Brielle optician who lives in Ocean Township, happened to be in Atlantic City when the air show roared overhead. Impressed, he made a mental note to return with camera in hand. The pandemic caused last year’s show to be canceled, but when it returned in August, Purdy was armed and ready. “They put on a fantastic show,” he says. As the pandemic strapped down the lives of so many people, Joan Rekemeier, a professional photographer who lives in Fanwood, found a way to literally lift her spirits. “I’m a Gemini,” she says. “There’s always something to learn, always something to buy.” In her case, a drone. “I passed my remote pilot test, and I’ve had so much fun with these aerial shots.” Rekemeier’s two sons, now 11 and 9, were in the original photo, taken above Sea Bright, “but looked like ants swimming,” so she spot healed them out. The pattern of the waves is suggestive. A leaping horse? A reclining figure? It’s up to you. The pastor of a nondenominational church in Egg Harbor Township, Mike Bersuch lives just a few minutes from Ocean City. He timed the shot to capture the last glow of sunset over the low line of clouds as people in small groups strolled the boards, their gestures almost legible. “To get the shot, you gotta go where you gotta go,” says Peter Alessandria, who lives in Dover but has driven as far as South Carolina and Maine to do just that. “Sometimes I’ve had law enforcement asking what I’m doing in the middle of the night taking photos.” In this case, after consulting astronomical charts, he set up in a parking lot near the Holland Tunnel in Hoboken. A former attorney with degrees in business and economics, he chronicled his evolution to full-time photographer in a book called Be Bigger Than You Think You Are. He’s put 150,000 miles on his 2004 Audi A4, and neither he nor his ride is ready to call it quits. Vantage point makes the point here. Parked at the end of a dead-end street around midnight, Pete LaRocca, a retired PSEG manager who lives in Toms River, prepared to shoot the causeway over Great Egg Harbor Bay between Ocean City and Somers Point. It opened in 2012. “The lights change colors,” LaRocca says. “There was green, and a blue-green. I liked the blue best.” 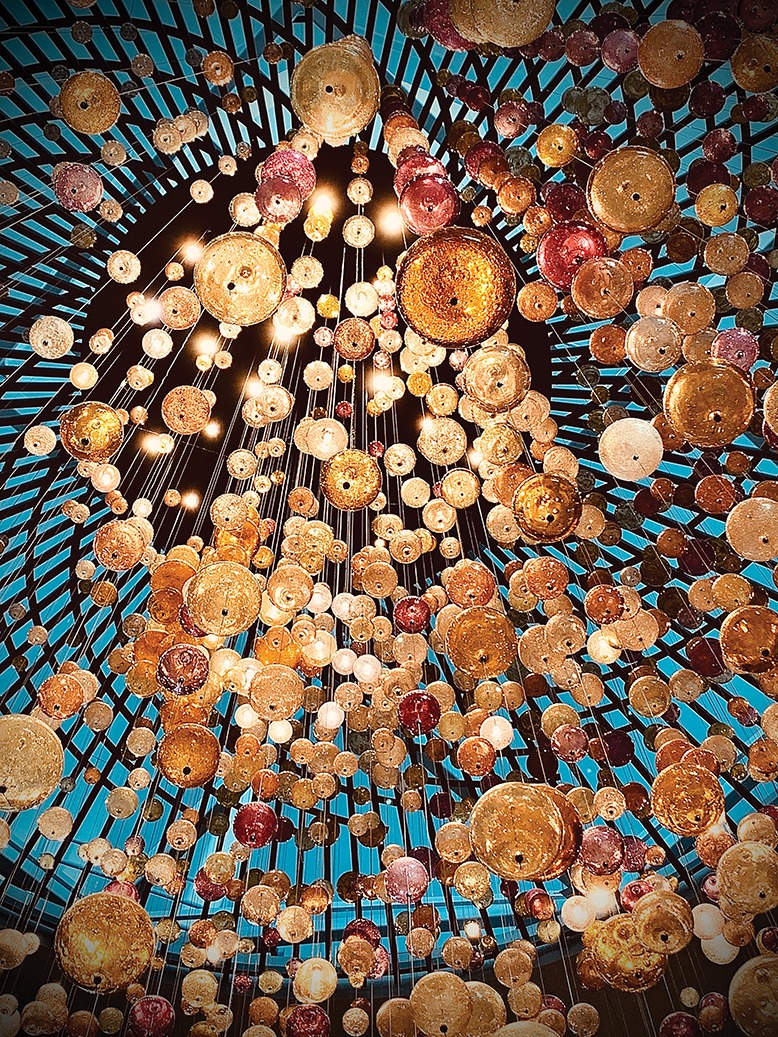 The Shops at Riverside

Excellent pictures speak for themselves, but sometimes their backstory deepens them. Ethan Nashold, 14, a Waldwick ninth-grader, shot this picture just above a bench in the mall where his maternal grandfather, Richard Ardito, loved to sit. “He was a large man, so he liked to sit a lot,” Nashold says. They were together when he shot this picture. “It was the last time I was in the mall with my grandpa,” Nashold says. “He passed away about one year later, and I couldn’t see him because of Covid-19. This is definitely one of the best photos I’ve ever taken.” Luke Tan, 15, an Edison 10th-grader and a Boy Scout, participates in the Shore Bird Stewardship program under the aegis of Conserve Wildlife New Jersey. Lying on his belly on a Cape May beach in May of 2020, he trained his lens on these sandpipers hunting for horseshoe crab eggs. “There were masses and masses of these birds everywhere,” he says. After shooting, he spent the afternoon handing out flyers and surveys for people to fill out.