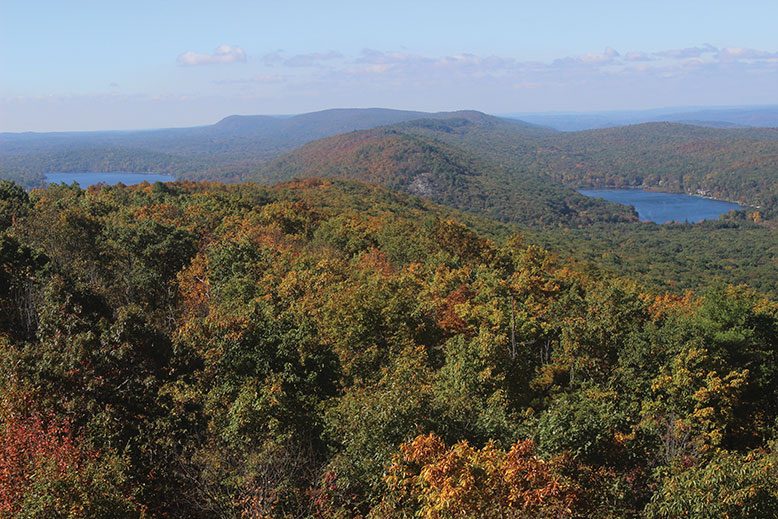 Hiking the entire 2,185-mile Appalachian National Scenic Trail (AT) might be on your bucket list, but chances are you won’t get around to completing the trek. Take heart. New Jersey is blessed with 72.2 miles of the iconic trail, providing numerous options for a taste. Here are four hikes that rival any section in the other 13 states traversed by the East Coast’s ultimate footpath. Be prepared: For the most part, these are wilderness trails, with no potable water or bathroom facilities. What they do have is a healthy black bear population, not to be taken lightly. (Read more here.)

This hike goes from swampy lowlands to soaring heights. There are forests of deep green rhododendrons; a long, mossy swamp; rare, healthy hemlock groves (most Eastern hemlocks are under siege by an insect invader); and far-reaching views from the ridge on a clear day.

The outing begins at the Mohican Outdoor Center, a rustic retreat operated by the Appalachian Mountain Club. The center—with multiple cabins and campsites for rent—is situated on a 60-acre glacial lake, with various connecting loop trails.

Grab a free trail map and, leaving the center, turn left on the gravel road through the property. On your left is Catfish Pond, home to perch, bass, sunfish and catfish (a fishing license is required).

Mountain laurel borders this section of the trail; it soon gives way to rhododendron as the land grows moister. Bright sprigs of wintergreen dress up the forest floor. Proceed  through a large hemlock forest, skirt Catfish Pond, cross an old creek bed and follow the swamp’s edge. At several points, the trail goes right to the edge of the swamp (help preserve the environment—resist the temptation to step onto the spongy floor and its variety of mosses). After about an hour’s walk, (approximately two miles) turn right on the stone road to the fire tower. In five minutes, you will intersect the Appalachian Trail. Turn right to head up the ridge. You can walk on the rugged trail or on the parallel stone road. A sign points to Catfish Fire Tower, three-quarters of a mile away.

The ridge-top walk is smooth and effortless. You’ll be awed by the parallel ridges that rise to the north and south. Soon the fire tower breaks through the treetops. If you are fortunate, Bob Wolf, the fire warden, will be present. Wolf will invite you to climb the metal stairs to the top of the tower and enter a cozy little enclosure where it seems you can see forever.

The ridgeline is 1,555 feet above sea level; the enclosure atop the tower is 60 feet higher. On a clear day, you can see the Catskill Mountains to the north and the Poconos to the west. The tower is typically staffed from March through May and October through November, when the woods are driest, because there is no leaf canopy to absorb heat.

Continue along the ridge, often dropping down to a shelf on the north side, with excellent views in the late fall. Flaming-red low-bush blueberries decorate the ridge top. You’ll get beautiful views from the rock slabs before turning right at a faint orange blaze on a rock, indicating the Rattlesnake Trail, which heads down to Mohican. A speedy half-mile descent leads to the trailhead. A left turn returns you to the lot.

Getting There: Mohican Outdoor Center is located at 50 Mohican Camp Road in Blairstown. Follow Route 94 to Mohican Road, 1.1 miles south of Blairstown.

This scenic loop takes you to Sunfish Pond, a glacial ridgetop lake that has been designated a National Natural Landmark. Ascend the orange-blazed Garvey Spring Trail (1.2 miles) for a 1,000-foot climb, hike the AT (1.4 miles), then descend the blue-blazed Douglas Trail (2.5 miles) to your vehicle.

The wide trail up the mountain—an old graded road—is a gradual climb through open forest, providing unusually broad views through the trees. Look for wild game—including bears, which are prevalent. Large, straight-columned tulip poplars tower above.

After a bend in the trail, a small waterfall appears in a gorge on the right. Pass the descending blue-blazed trail that goes off to the right. Fallen leaves can be treacherous at this point; stick to the high side of the trail for better footing.

At a flat intersection, the Rockcores Trail joins the Garvey Spring Trail for a while before turning left. This route was created in the 1960s when the Army Corps of Engineers bored out core samples as part of the groundwork for the planned Tocks Island Dam, which was to be constructed across the Delaware River. The dam was never built— and the Delaware remains the only free-flowing river in the East—but these fascinating core samples are still lying on the forest floor. Our route will not pass them, but ambitious hikers can use a guidebook to find the samples.

In a few minutes, turn right and ascend the orange trail again. After 45 minutes, as you reach the summit, Sunfish Pond appears straight ahead, perched atop the ridge. Turn right on the AT and follow a rocky section around the shore of the mile-long pond.

Man-made rock cairns and sculptures adorn the wide, rocky beach, tempting you to build your own. A spring gurgles through the rocks on the trail.

These lands are within Worthington State Forest, named after C.C. Worthington, a 19th-century industrialist who once owned all 8,000 acres contained within the park.

Leaving the pond area, a woods road takes you down the ridge, past a swampy pond and a recent fire scar. Follow the blue-blazed Douglas Trail for another 2.5 miles to Old Mine Road.

Follow the stone road, then take the right fork where the blue and green trails converge. When the trail splits, continue on the blue trail to the parking lot.

Getting There: I-80 west to Exit 1 onto Old Mine Road. Follow the road to the Douglas Parking Area, located at the north side of Worthington Campground.

A highlight of this hike is Sunrise Mountain Pavilion, one of the state’s best areas for watching eagles, hawks, kestrels, falcons, vultures and other raptors soar and glide as they head south during the fall migration. In North America, birds migrate in north-south routes called flyways; this particular spot, on the Kittatinny Ridge, is on the Atlantic Flyway.

Volunteers are out during the migration season (late August to early November) monitoring and recording the passing raptors. Their counts assist scientists in studying migration patterns. Up to 18,000 raptors have been spotted in a single day.

After a short walk from the parking lot to the AT, you’ll reach the ridge and Sunrise Mountain Pavilion. Here you’ll find bird lovers and New Jersey Audubon staffers with their spotting scopes who can help you identify each species. The raptors ride the updrafts along the ridge; the best places to see them are along the ridgetop. The birds are often lower in the sky and easier to observe in the morning, when the ridge is heating up from the sun.

The ridgeline trail is considerably rocky, and the slick, fallen leaves add to the challenge by masking the rocks. Step carefully. In about a mile, the yellow-blazed Tinsley Trail intersects the AT, which at this point is covered in white pine needles. There’s a beautiful grove of white pines to the left on the ridge that makes a great place for a break.

The trail crosses to the right side of the ridge, offering long views of mountains and forest. The trail becomes smoother, and a few pools of water appear on the left. In another 1.4 miles, you can detour onto the brown-blazed Stony Brook Trail and a blue-blazed trail to get a look at an Adirondack-style log shelter. There are 225 such shelters along the AT; this one, the Gren Anderson Shelter, was built in 1958 and is one of the oldest such structures.

After checking out the shelter, double back to the white-blazed AT and turn left to continue the hike. When you reach the green-blazed Tower Trail on your right, the Culver Fire Tower will loom before you. A picnic table provides a perfect spot for lunch. The view is excellent; for an even better view, climb the six flights of the 47-foot fire tower.  A warden mans the steel tower whenever the woods are dry, mostly in the fall and spring.

Now reverse your trek to return to the starting point.

Getting There: From NY 26 in Culvers Gap, follow Upper North Shore Road for .25 miles, turn left on one-way Sunrise Mountain Road and follow to the end at the parking lot.

This is a short hike, and you can actually drive the road to your destination, High Point State Park Memorial. But we came to hike, right?

The parking lot for the AT is down the hill from park headquarters and to the right. The trail up to the memorial is a bit rocky, but worth the effort. The first highlight is the observation platform, a large wooden deck suitable for hawk watching. The deck affords a spectacular panorama spanning the Kittatinny Valley, Pochunk Mountain and Wawayanda Mountain to the east; the Delaware Water Gap to the southwest; the Catskill Plateau to the northwest; and the Pocono Mountains to the west. On a clear day you might even see the Manhattan skyline to the southeast.

Dominating the scene is the High Point State Park Monument, a 221-foot-tall granite obelisk that marks the highest point in New Jersey, 1,803 feet above sea level. It was built as a veterans’ memorial, thanks to the generosity of Colonel Anthony R. Kuser, a prominent business leader/philanthropist and founding member of the New Jersey Audubon Society. Kuser owned these lands, which he donated to create the state park, and helped fund the monument.

After leaving the observation deck, turn onto the red-and-green blazed Monument Trail. You’ll delight as the monument comes closer, growing more impressive with every step. A walk around its base provides a breathtaking 360-degree view of the surrounding area.
Turn back and retrace your steps to the car, or take the road for a faster walk. At last, you can enjoy the views without watching your footing.

Getting There: Follow Route 23 north about 7 miles from the town of Sussex.