Jen Rondeau has always had a creative side. The West Orange resident was a theater major in college and has dabbled as a musician, playing guitar and bass. But it took being quarantined in her “nondescript, gray home,” she says, to tap into her innermost artist. When the quarantine lifted, Jen emerged with a house that was anything but boring. She also had a new business.

Jen and husband, Paul, bought their four-bedroom brick ranch in 2015 and waited a full five years before tackling any projects. With busy lives—Paul is a cinematographer for film, television and commercials—and two young boys, Jack, 9, and Hugo, 6, there just wasn’t time. “The house had been a flip,” explains Jen, “so it was already an open space in decent shape.” It provided an ideal blank slate, but also, astonishingly, a view of Manhattan on a clear day. Another bonus: an exceedingly deep backyard. “We have about a half acre,” says Jen. “That’s rare in this town.” The Rondeau family, including Jack and Hugo, on their home’s front stoop. Photo by Laura Moss

When the quarantine came around, the blank slate beckoned. Deep into January, with the Christmas tree up and the furniture slightly rearranged, Jen started to see the possibilities. She began creating boldly colored geometric patterns on her laptop, using various design programs.

With a clear vision, but still a bit timid, she started by experimenting in the laundry room. “I knew it wasn’t a room that people would see,” she says. “Then, when the laundry room turned out okay, I decided to try other rooms.”

Paul was entirely onboard. “She’d be talking about painting this room or that room, but just never got the chance,” he says. “Then, suddenly, it happened.” 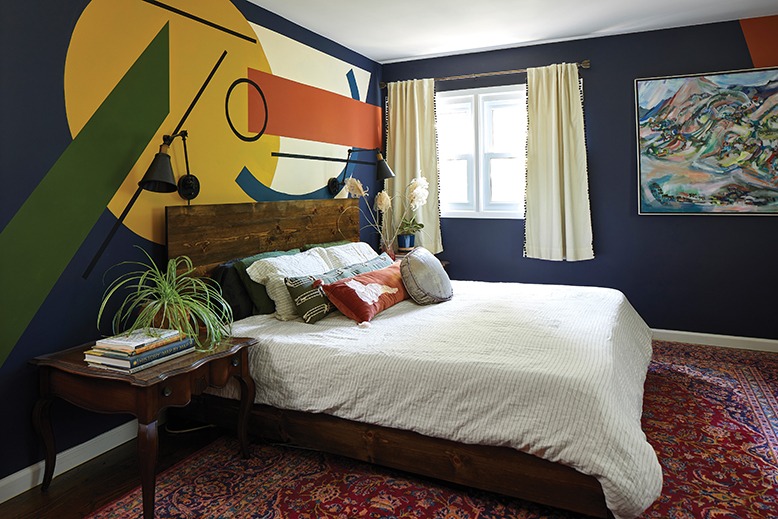 The master bedroom was one of Jen’s first projects as she explored color and shapes. Photo by Laura Moss

First up was the boys’ bathroom—another space that few outsiders see. As Jen’s confidence grew, she turned to the master bedroom, living room, dining room and foyer. “We’d been living in gray for so long,” she says. “I wanted deep, dark, saturated colors. I went wild.”

Jen sketches her ideas on a pad or laptop; then, once satisfied with the design she draws on the wall with chalk and tapes it off. The process is slow and meticulous, but worth the effort. The sweeping designs fill the walls and become the focal point in each room. Guitars flank a colorful mural in the dining room. The family “jams together,” Jen says, with everyone grabbing an instrument. Photo by Laura Moss

Many of Jen’s designs feature carefully plotted geometric shapes (“I like straight lines,” she says), but the striking foyer is a departure—more spontaneous and free-form. “I did it all by hand and had to keep going back and fixing it,” she explains.

Paul stays out of the process. “I have very minimal input,” he says. “I know she’s got such a strong direction. I don’t want to interfere with her flow.” Jen isn’t the only creative one in the family; Paul designed and built the boys’ backyard fort. Photo by Laura Moss

Which isn’t to say that Paul sat on his hands during the pandemic. Rather, he took on another blank slate: the backyard. While Jen toiled inside, Paul built an impressive play fort for the boys, complete with a lookout tower and climbing wall. It was no easy task. Paul estimates he lugged some 2,000 pounds of concrete, plus all the lumber, “up 40 steps and another 40 feet uphill” to construct the fort. Elsewhere in the yard, Paul built an organic vegetable garden for Jen, who maintains broccoli, kale, lettuce, okra, peppers, carrots and more. Jen in the organic garden that Paul designed and cultivated. Photo by Laura Moss

While Paul continues to tweak the fort and tend the garden, Jen has launched a mural-painting business. The design process is a collaboration with clients, but ultimately, she says, “everyone I work with is open to color.”

As for the Rondeau house, that remains a work in progress. “Paint is cheaper than building stuff,” jokes Jen. Adds Paul: “Our house is her workshop.”