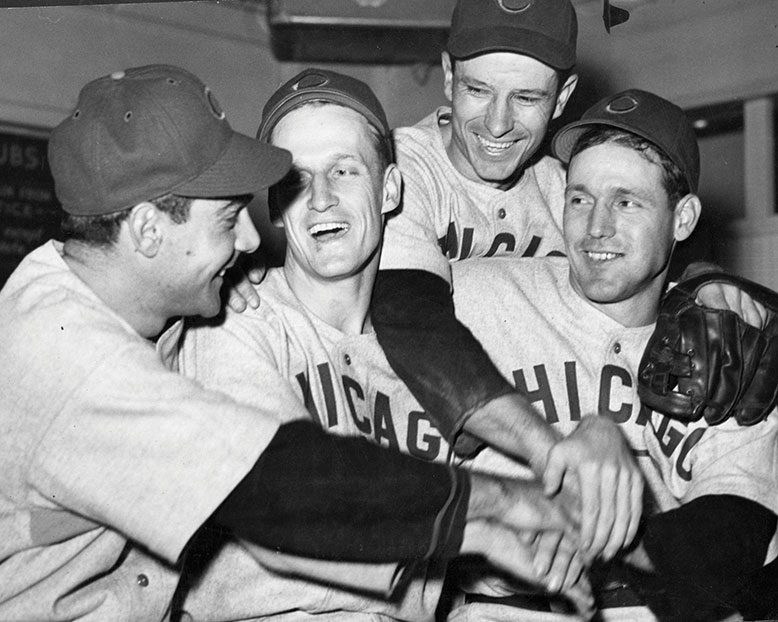 Borowy, second from left, celebrating a victory in the 1945 World Series with the Chicago Cubs.
Photo courtesy of Sporting News via Getty Images

Very few summers in baseball history have seen the Chicago Cubs load up on stars for a World Series run while the mighty Yankees dump their best players. But 70 years ago, that unorthodox scenario unfolded to the dismay of Yankees fans. At its epicenter was New Jersey native Hank Borowy, who fell one win short of immortality.

After starring at Bloomfield High School and Fordham University in the 1930s, the 6-foot-tall right-hander had a brief, but memorable, career in the Yankees organization, starting with three seasons with the minor league Newark Bears.

Borowy—who had a wartime deferment from the draft because of his off-season job at a defense plant—went 15-4 as a Yankees rookie in 1942. He beat St. Louis in Game 3 of the 1943 World Series and was the starting pitcher in the 1944 All-Star Game. So in July 1945, when Yankees president Larry MacPhail dealt Borowy, who already had won 10 games that season, to the Cubs for about $100,000, people were incredulous. Why would the Yankees sell their best pitcher?

The 29-year-old Borowy went 11-2 for Chicago after the deal, and shut out Detroit in Game 1 of the 1945 World Series, keeping MacPhail on the defensive. Citing the fact that Borowy had only pitched four complete games that season before the deal, MacPhail declared: “Borowy had his chance with us, and he failed.”

After losing Game 5 in the series, Borowy’s four scoreless innings of relief in Game 6 put the Cubs one win away from a championship for the first time since 1908. Borowy started Game 7, but he didn’t record an out. When 40-year-old Tigers center fielder Doc Cramer—a Manahawkin native —ripped Borowy’s ninth pitch down the left-field line for an RBI single, Borowy was done. The Tigers would score five runs that inning and win the game and the series.

Borowy, who died in 2004, spent six more seasons in the big leagues with four different teams. He never played in another World Series. Seventy years later, neither have the Cubs.