Asbury Park
Exit S-102/N-100A
Diversity is one of the elements that make the revitalized Asbury Park a standout destination. Here, buff and bronzed Speedo-clad men roam comfortably on the beach and boardwalk alongside preppy young couples equipped with diaper bags and beach pails. The lively boardwalk starts at Convention Hall on the north end and runs to landmark Casino Pier at the south end. In between there’s a bit of everything—even a miniature water park and putt-putt course for the kids. Mostly, though, it’s about food and drink and music: Try the tapas at Langosta Lounge, cocktails at the Asbury Park Yacht Club, or a well-dressed hot dog at Mayfair Boardwalk Grill. At each stop, the people watching is fabulous. Paradise, in the Empress Hotel, is the late-night hangout—equal parts gay revue and nightclub.
Read More: Destination: Asbury Park

Ocean Grove
Exit N-102/S-103
This quaint community is literally adjacent to Asbury Park but figuratively miles away. A long-time religious retreat, Ocean Grove is known for its Victorian homes, the Great Auditorium, B&Bs, summertime churchgoers—and more recently, a growing gay community. The pristine boardwalk is lined with benches, street lamps and potted flowers but nary a shop, bar or restaurant. For that (minus the bar), head to Main Avenue, with its boutiques, gift shops, pizzerias and a few fine restaurants. A crowd favorite is Nagle’s Apothecary Cafe for ice cream and outdoor seating. On the beach, generations of families co-exist with the gay population. Restrooms and showers are convenient on the south end of the boardwalk. Parking can be difficult, even with blocks of on-the-street free parking. 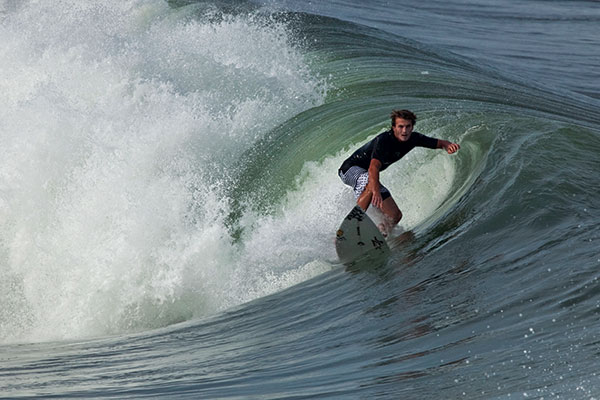 Inlet Beach, Manasquan
Exit N-90/S-98
Surfing in New Jersey is generally an exercise in either patience or fearlessness. When the water is warm, you’ll often wait weeks for decent breaks. When the water is cold, the waves are epic but often beyond the skill level (and temperature threshold) of most casual surfers. Enter Inlet Beach, the Garden State’s most consistent year-round surfing spot. The beach’s reliable surf can be attributed to its enormous jetties, which corral approaching waves into long, glorious breaks even in the flat summer doldrums. Things get particularly interesting just before storms and during late-summer swells, when it’s possible to find standup barrels as the inlet breaks at 15 or 20 feet. However, the spot can get crowded on summer weekends. When the surf’s down, pay a visit to Inlet Outlet, Manasquan’s favorite surf shop and a local institution for more than three decades.

Whale Beach, Upper Township
Exit 17
Go down to Sea Isle City, turn left at Landis Avenue, and keep going until you pass Taylor Avenue. Once the homes and crowds begin to disappear, you’ve arrived at Whale Beach, one of the Jersey Shore’s best-kept surfing secrets. Frequent sandbars create nice, long, clean breaks all summer, and the lack of crowds allows everyone to have his or her own little slice of wave heaven.

Long Beach Island (southern tip)
Exit 63
The most crowded break on LBI can be found at Holyoke Avenue in Beach Haven. But go a little farther south to the island’s southern tip, and you’ll find great waves and far fewer people. An imposing jetty creates an intimate and consistent cove of long, tidy lines. Make sure you bring some bug spray—the greenhead flies can get pretty intense. But the waves are worth it.
Read More: 13 Amazing Shore Surf Schools

Fisherman’s Cove (Manasquan)
Exit 98
Located on 55 acres of marshland along the Manasquan Inlet, Fisherman’s Cove Conservation Area has a designated Dog Beach Park where leashed canines are welcome all year-round. The park includes a sandy beach where dog-owners can rest and relax in-between dips in the cool inlet water. Open from 7 am to dusk, the beach is free and conveniently located less than a quarter-mile from Manasquan’s oceanfront beach and just over a mile from the borough’s downtown district, which includes shops, food and the Algonquin Arts Theatre.

Island Beach State Park (Seaside Park)
Exit 82
Island Beach is for lovers of animals, both wild and domestic. One of the few undeveloped barrier beaches on the north Atlantic Coast, it is home to a large osprey colony, as well as red fox, blue herons, peregrine falcons and more than 400 species of plants. Man’s best friend is welcome south of the ocean swimming areas as long as they are on a leash no longer than six feet. Check in with the park office before bringing your furry pal, as there are certain times of the year when birds nest and dogs are prohibited—canines are specifically prohibited on the Spizzle Creek Bird Blind Trail out of respect for the wildlife there. Most visitors with four-legged friends pack picnic lunches when visiting the park, which is open from 7am to dusk on weekends and 8 am to dusk on weekdays.

Stone Harbor Beach (Stone Harbor)
Exit 10
Don’t be misled by the oceanfront signs saying pets aren’t allowed on Stone Harbor’s beach. The borough has opened the northern end of the beach between 80th and 83rd streets for leashed canines before 9 am and from 6 pm until dusk. During the day, the 82nd Street Park is popular for dog-toting families. Your pup can take in the fresh air and green grass while your family enjoys the playground, the baseball and soccer fields as well as the basketball and tennis courts. At night, take your dog for a stroll downtown, where the staff of Paw Prints hands out treats to quadrupeds.