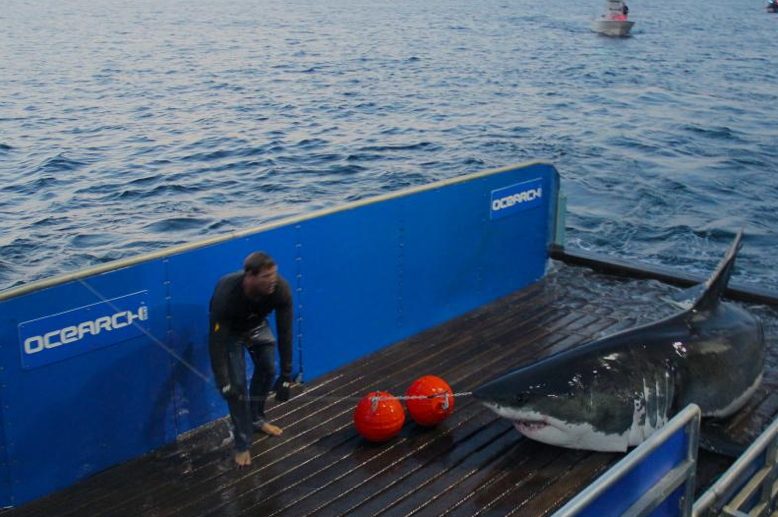 Mary Lee gets tagged off the coast of Cape Cod in 2012.
Courtesy of OCEARCH.org

It’s the time of the year when everyone’s making plans to return to the Jersey Shore. For some, that means securing a rental while they still can. For others, it means scoping out the beaches before the tourists descend. For toothy Mary Lee, an East Coast gal with plenty of junk in the trunk, it means poking her nose in all the hottest shore destinations, catching the eye of a tasty dish, chewing him up and spitting him out.

By the way, we’re talking about a shark.

Mary Lee is a 3,500 pound, 16-foot great white who has been spotted cruising up the coast of New Jersey. She was tagged in Cape Cod in 2012 by OCEARCH, a non-profit that researches and collects data on great whites and other large apex predators. OCEARCH allows viewers to see the real-time movements of Mary Lee and plenty of other sharks around the world with its Global Shark Tracker. The organization hopes their efforts will help promote shark knowledge while dispelling negative, damaging perspectives.

The tag on the shark “pings” whenever their dorsal fin breaks the water’s surface, sending a signal to a satellite which pinpoints the shark’s approximate geo-location. Mary Lee last pinged a few miles off the coast of Long Beach Island early Friday morning. Before that, she was spotted near Atlantic City, Stone Harbor and Cape May.

Mary Lee was named for the mother of Chris Fischer, an OCEARCH expedition leader. “I was waiting and waiting for a special shark to name after her and this is truly the most historic and legendary fish I have ever been a part of,” Fischer says on the OCEARCH website. Since she was tagged, Mary Lee has traveled nearly 20,000 miles. She has trekked as far south as Florida and recently spent a stint in the Carolinas and Virginia. Today’s voyage isn’t her first cruise through Jersey waters; she pinged far off the coast in January 2013. Then, like many sad, winter-weary East Coasters, she escaped to the warmer waters of Bermuda.

Mary Lee is also making quite a splash on social media. Her Twitter account, @MaryLeeShark, chronicles her journey and answers questions from her 16,000 followers. She gamely tosses out Jaws and West Side Story references, politely rebuffs fans requests to pet her, and confesses to enjoying the SyFy Channel movie Sharknado. The Twitter is not affiliated with OCEARCH.

Before you start stocking up on pistols and canisters of nitrate, relax: there hasn’t been a shark attack in New Jersey in 99 years. In July 1916, a series of shark attacks that led to a wave of panic and created national headlines. Five people were attacked by sharks in Beach Haven, Spring Lake and Matawan. Only the final victim survived. Notably, the attacks were the inspiration for the most famous shark story, Jaws.