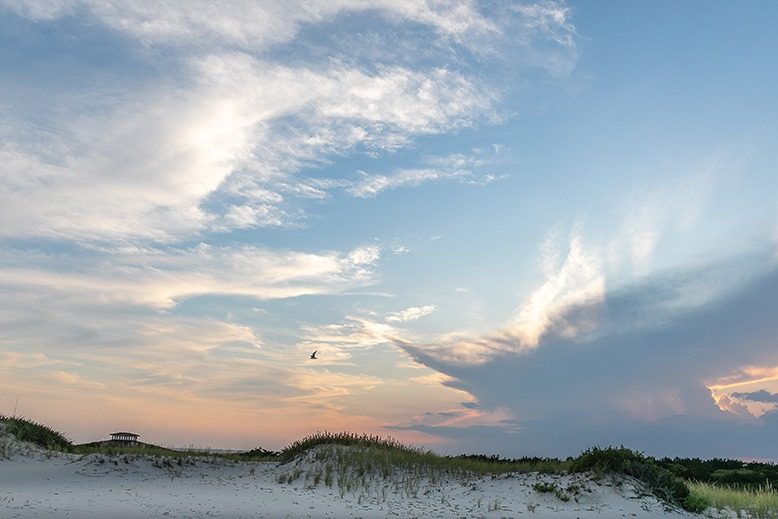 Route 35 in Ocean County runs down the spine of a skinny barrier-beach peninsula that looks on a map as if it might easily snap off the mainland and drift out to sea. The road narrows along its southernmost stretch, and the buildings that border it shrink—from the three-story motels of Seaside Heights, through the two-story deck houses of Seaside Park, to the little cottages nestled together in Midway Beach. The road ends at a gatehouse that is perhaps the nearest thing in New Jersey to a time portal.

As you enter the gatehouse to drive into Island Beach State Park, you are poised between now and then. Behind you are the dense settlements of the modern Jersey Shore. Ahead of you is the unsullied past.

The road continues beyond the gatehouse for another nine miles, through the longest intact stretch of what the New Jersey coastline looked like before the advent of boardwalks, bungalows, badge checkers, frozen custard, Tilt-A-Whirls, Skee-Ball, slot machines, Miss America and Snooki. There are no beach towns here, just the raw material from which beach towns were carved. There is a house that the governor can use—as the lingering image of Chris Christie in a beach chair will forever remind us—and a handful of fisherman’s shacks still held by families who were granted leases when the land became a state park in 1959. Otherwise, the population of these 3,000 acres is confined to foxes, ospreys, the occasional snowy owl and assorted other fauna. Island Beach—flanked to the east by the Atlantic Ocean and to the west by Barnegat Bay—is a remnant of a time when social distancing was the natural order of life along the coast, not a government directive. If you get here early enough on a summer morning, before the lots fill and the gate closes, it can take you back to that time, and away from this year of Covid-19.

“Every time I drive through the gate, I put the windows down and just instantly relax,” says Jenifer Clayton, the park superintendent. “It’s just the smell of the air.”

The road in the park doesn’t reveal much. It’s just a brush-bound corridor with no water views. But stop at one of the 23 lots along the way—some big, some small—and you can explore one of New Jersey’s great natural resources.

The park is divided roughly into thirds along its length: the preserved natural areas at the north and south ends, with trails and access for fishing and kayaking, and the recreation zone in the middle, with the swimming beach on the ocean side. The beach is the park’s marquee draw, attracting most of the almost 1 million annual visitors. The 2,000 parking spots have been reduced by half to limit capacity due to Covid-19 concerns, and can easily fill by 10:30 on a nice summer morning. At that point, the gate closes to vehicles. But in the week after Labor Day last September, at the start of the brief, glorious season that Shore residents jealously guard as “locals’ summer,” there was plenty of room for Mary Ann Carpinello, whose love for the beach started decades ago, when she still lived in Brooklyn. “I’d take the kids in strollers on the el to Brighton Beach station,” she says. Her kids have kids of their own now, and she has a house in South Seaside Park, the last town before the park entrance. She had brought her beach chair and a book to her spot on three of the last four days. “If you love the beach, you find a way.”

The swimming beach has lifeguards, two bathhouse pavilions and concessions, but in the rest of the park, you’re mostly on your own. (There are only six restrooms apart from the beach area.) Surfers and sailboarders are welcome at the south end of the beach area. Leashed dogs are welcome in most of the park, but not at the swimming beach in the high season. In season, the park is open until 8 pm daily, but swimming is prohibited after 6 pm. Surfer Richard Brecka and his intrepid friend. Surfing and sailboarding are allowed at the south end of the swimming beach. Photo by Frank Marshal

About a mile south of the beach on the Barnegat Bay side is the water entrance to the park at Tice’s Shoal, where hundreds of boats anchor in the shallow water in the high season. Some boaters wade to shore and take Fisherman’s Walkway across to the beach on the ocean side; others stay for the floating party.

The survival of all this—the bayberry and beach plums, the shadbush and eastern red cedar, the fiddler crabs and striped bass, the salt marshes and the coastal thickets, the rolling dunes anchored by shrubs and grasses—comes courtesy of the 1929 stock market crash. At that juncture, the area was ready to be built over, like much of the Jersey Shore. A 1927 map showing what might have been hangs in the old Coast Guard station that is now an interpretive center in the park’s southern natural area. The plan for the resort town envisioned by Henry Phipps, a business partner of Andrew Carnegie, included golf courses, tennis courts, yacht clubs, rows of houses—and not a dune in sight. Phipps, and the plan itself, died soon after the market crash. The state eventually purchased the land from Phipps’s estate and made it into a park.

Kelly Scott, the park naturalist, has an office in that old Coast Guard station, but she is more often out leading kayak ecotours in the bay and introducing children to Ellie the diamondback terrapin. On one memorable occasion, she worked with the Audubon Society to band snowy owls. “I held him,” she says, describing the day when a radio transmitter was placed on the back of one of the rare Arctic birds that have wintered in the park in recent years, “and there was a humpback whale breaching in the ocean and bald eagles flying over my head, and I just thought, Oh my gosh, this is the best day ever.”

Displayed in a glass case outside her office is the skeleton of another creature that helps tell the story of how life unfolds on this barrier island. The creature, a three-legged fox, was discovered dead at the rustic beachfront fisherman’s shack that is an icon of the park. “She may have chewed off her foreleg when she had mange and realized she was doomed,” says Bill Bolger, who found the corpse curled up inside an old propane tank whose bottom had rotted out. “She would not have returned to her den, so as not to foul it, and she goes off to die under the shack.” 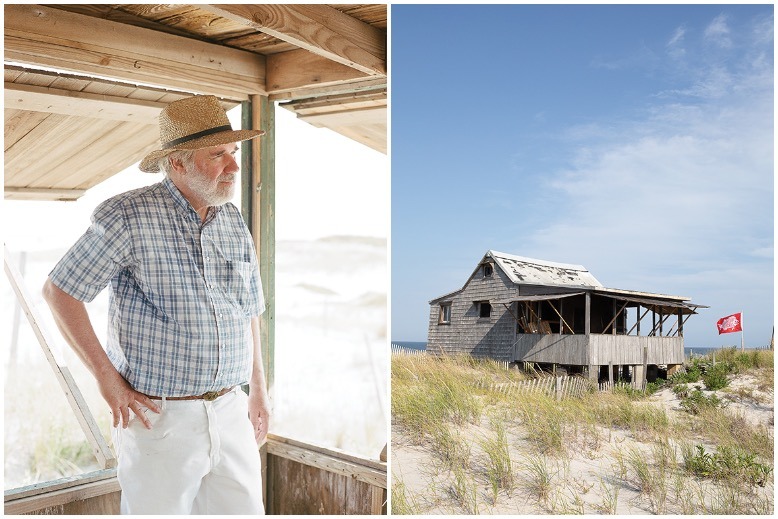 Bolger was introduced to what is known as the Judge’s Shack almost 40 years ago by an older colleague at the National Park Service, where he worked as an architectural historian: Penny Batcheler, whose father, Richard Hartshorne, bought the shack in 1941, when the land belonged to the Phipps estate. It was built in 1910, about a mile from what is now the park entrance, but in 1952, a year after he was appointed a federal district court judge by President Harry Truman, Hartshorne had it moved five miles south to a tall dune with a view of both the ocean and the bay.

“For such a little building, it takes command over this beach,” says Bolger, who has helped maintain and repair the shack over the years in gratitude for his many visits here. “The sound of the surf, watching the sun rise and the moon rise—a day here is worth about a week anywhere else.”

The state has owned the shack since the deaths of Batcheler and her husband; it is managed by the Judge’s Shack Association, a friends’ group to which Bolger belongs. “It’s probably the best preserved in-situ sportsman’s fishing shack on the Jersey Coast,” he says. “These were all over the place 100 years ago.”

The shack has no heat, electricity or running water, and it looks as if a strong wind might carry it away, but when Hurricane Sandy blew through in October 2012, it held. “When I saw the photo of the roller coaster sitting in the water, I thought, Yeah, well, okay, I know what happened to the shack,” Bolger says. But all that was lost was a portion of its old roof.

Judge Hartshorne liked to fish from the beach, and his shack is a landmark now for the fishermen who buy the $195 annual permit that allows them to take their four-wheel-drive vehicles to one of the access points along the park road, let some air out of their tires to make the sand easier to traverse, and then cruise to their favored spot for surfcasting. “Near the Judge’s Shack,” Warren LaVigne says about his spot. “That’s where we always are.”

LaVigne, a Princeton resident, has been coming since he was a boy to the park where his mother came as a girl, when it was still the Phipps estate. Last summer, he sat alongside his 2006 Ford F-150 longbed pickup with a popup camper, his rods planted in the sand and lines stretched into the surf. “You can feel it when the stripers are biting,” he says. “You see the birds start to work, you see some mullet churning it up out there.”

LaVigne has caught many fish here, including a 20-pound bluefish and a 26-pound striped bass, but nothing is biting this day. It hardly matters. “Just look,” he says. The view around him—the dunes, the gentle surf, the flawless sky above—is all he needs to catch. At the southern tip of the park, the land widens and spills out into a shifting tidal landscape of bay water and sand. This is the Sedge Island Marine Conservation Zone, the first such zone established by the state.

A small kayak- and canoe-launch beach is the gateway to this tidal labyrinth for paddlers, fishermen and clammers, who wade the shallow water wielding rakes. “I got 140 the other day,” says Patrick Miczak of Essex Fells, who was staying in Lavallette. The small clams are more prized, but “the big ones, you grill them and chop them up for chowder.”

The park road ends after nine miles, but the park itself continues. If you leave your car at the last lot and take the path through the dunes onto the beach, you can cover the final mile by foot, accompanied by an occasional fisherman’s vehicle, approaching two landmarks in the distance that, in this wide, empty space, seem closer than they really are: the long jetty on this side of Barnegat Inlet, which separates the park from Long Beach Island, and Barnegat Lighthouse (aka Old Barney) on the LBI side. It’s not even a quarter mile across to LBI—a barrier island that developed in a much different way over the last century—but without a boat, it’s not easy to get there from here.

Back at your car, a navigation app will tell you it’s a 52-mile trip—north, south, then north again on LBI to reach Old Barney. The app says it will take an hour and 11 minutes without traffic, which seems at once too long, given the proximity of these two barrier beaches, and not nearly long enough, given their differences. But the app doesn’t measure in decades.