Lucky Leo’s has been a Seaside boardwalk mainstay for 66 years. Courtesy of Lucky Leo’s

Luck began following Leo Whalen, now 92, even before he opened his iconic house of fun on the corner of Hamilton Avenue.

At 18, Leo was drafted into the army in June 1945. World War II officially ended that September. Leo lucked out; he didn’t have to go to war. Instead, he went back to Toms River High School, worked at boardwalk stands in Seaside Heights, and married his high school sweetheart, Barbara. One day, while Leo was calling numbers for a skilo game (similar to bingo), he spotted Seaside mayor J. Stanley Tunney. He ran over and asked him about renting a site on the boardwalk. Tunney agreed, and Leo built his first stand. Eventually, Leo took over the lease for several other stands the mayor had owned.

In those days, Leo was also teaching middle school math and science in Seaside Park and Berkeley Township. But Leo, a master at chit-chat, was destined to work with customers full-time. In 1975, he helped build a block-long arcade with his sons. “I put about 220 games in there, air-conditioned, new carpeting, big signs,” he says. 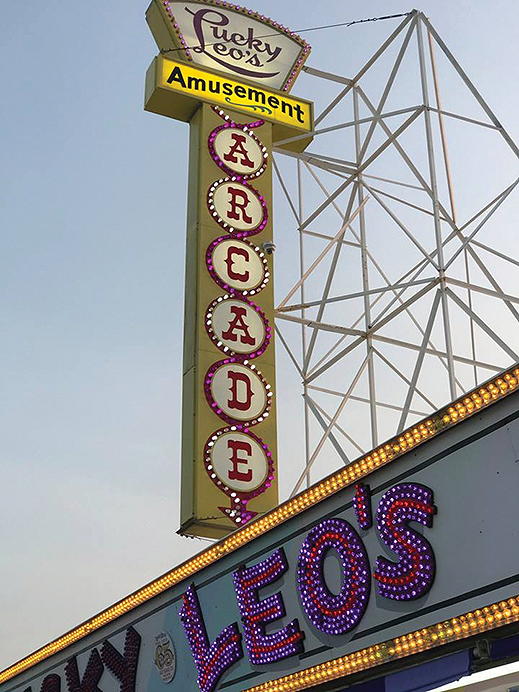 At the time, there were four other Seaside arcades to compete with. But Leo was lucky and business was brisk.

“It was always a friendly business, and it was always happy times when you met people on vacation,” he says. “I made it a success. My two sons, Stevie and Tommy, made it what it is today.”

The siblings have been running the business since 1986. Steve’s daughter Kelly started managing the arcade about 10 years ago. Some of Kelly’s cousins work behind the counter as well.

“We all have a bit of crazy,” she says about her family, “but it’s very much, I’ve got your back, you’ve got mine.”

In 1985, Leo retired to West Palm Beach, Florida, with Barbara, now 87. They spend much of their time golfing.

Luck continues to follow the couple. Barbara has made two holes-in-one in her lifetime; Leo has three. His reward for one of his aces was a Jeep Cherokee. “Who in the hell can beat that?” he says. “If I won two boxes of chocolate from the boardwalk I’d say, ‘My god how nice.’”

Leo still sees familiar faces when he visits Seaside. People say, “Leo, I remember you as a young kid when you worked the stand back in the ’60s. And I remember you when you put this building up,” he says.

Indeed, Kelly says nostalgia draws families back to Lucky Leo’s. “And the fact that we’re a family, too,” she says.

This summer, families can enjoy five new games in the arcade. Players with 200,000 points or more are considered VIPs. These gamers can attend weekly parties with drawings for prizes such as Broadway tickets and cruises.

The affinity for entrepreneurship runs in the family.

In 2005, Kelly’s sister Patty Sabey opened a boutique next to Lucky Leo’s. Hurricane Sandy destroyed the shop, but Sabey reopened in Lavallette. “Guess she couldn’t get the boardwalk out of her blood, either,” says Kelly. In 2017, the Whalen family opened a candy store one block down from the arcade. Courtesy of Lucky Leo’s

Sabey is not the only one. Leo’s son Tommy now manages Lucky Leo’s Sweet Shop, the latest Whalen family boardwalk business. Opened in 2017, the candy store makes everything from fudge to CBD-infused chocolates. When Tommy, who has his father’s charm, offers customers a chocolate sample, he provides the following directive: “It’s not a piece of meat. No chewing. Let it melt in your mouth.”

Will future generations of the Whalen family continue in the arcade business?

“I guess they will until they get tired,” says Leo. The reality seems more promising. When Kelly’s 3-year-old son visits the arcade, “he doesn’t want to play the games,” she says. “He always wants to be behind the counter.”