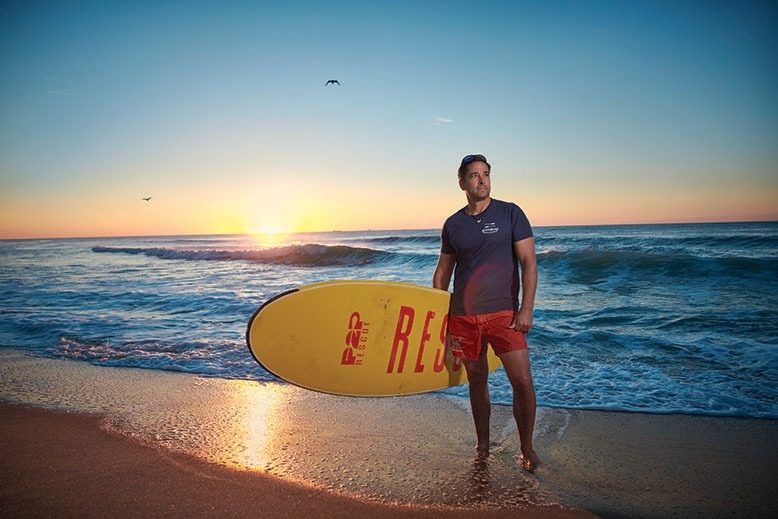 Jersey Shore lifeguard stands are filled with high school and college students, as well as teachers with summers off. But there are also lawyers, nurses, firefighters and office workers filling the jobs. For professionals who moonlight—or, perhaps, sunlight—as guards, the gig offers an escape from the daily grind.

“I’m on the stand eight hours a day, and I’m not allowed to have a cell phone. It’s great. It’s like therapy,” says Jerry Clark, 50, a personal-injury attorney and father of three who lives and guards in Spring Lake.

Some lifeguard on weekends after working Monday to Friday at another job. Others work shifts, allowing them to join the beach patrol on off days. Guards in their 40s or 50s whose full-time jobs include managing projects or people in an office are happy to be a worker bee on the beach, perhaps with a 16-year-old boss. The gig also encourages desk workers to stay in shape so they can save swimmers when needed and also compete in lifeguard contests.

Most of all, guards say they enjoy bonding with others sitting on the stands. “Our beach patrol is such a family. The best friends I’ll ever have in my life, I made through lifeguarding,” says Laura Patterson, a nurse who guards in Barnegat Light.

Jerry Clark almost skipped his lifeguard test after seeing his son’s friends were there, too. These were the kids he had coached in Little League years ago. “They were like, ‘Hey, Mr. Clark. What are you doing here?’” the father of three recalls. “Frankly, it was a little embarrassing. But once I started talking to some of the older people and getting in the water, I felt at home.”

That was four years ago, when Clark decided to return to the beach work he had done during high school and while studying at Villanova University. “As my kids got older and I had more time, it was always something I wanted to go back to,” he says.

Clark is a personal-injury attorney, whose main office is located in Belmar. Work can be stressful, so guarding in Spring Lake, where he lives, provides some relief. “Lifeguarding on the beach was a complete mental health thing. It was exactly what I needed,” he says. “My first day I’m on the stand, I was pinching myself. It was an enormous stress off my shoulders.”

He also likes the mandatory workouts during the summer and the motivation to stay in shape so he can pass the annual test; requirements include running a mile in less than 10 minutes and swimming 550 yards in less than 10 minutes. With beach patrols struggling to find guards, Clark considers his summer job a public service. Lifeguarding, Clark says, has been a relief from his demanding job as an attorney. Photo by Dave Moser

Running a busy law practice, Clark also likes the escape. “I’m here not to be a boss,” he says. “I go down there to get away from all of that.”

Guards like Clark have rescued people on and off the job. While on vacation in Puerto Rico, Clark once saved a swimmer caught in the current. “It never really leaves you,” says Clark, who rescues at least one person each summer.

His wife, Dodi, is understanding about his side gig. Son Hunter, 21, is a guard at a nearby stand; son Ged, 18, caddies; and daughter Anna, 15, might want to guard someday.

Clark says it is easier to be a guard at 50 than 15. “You have a wider perspective of it,” he says. “I have that many more years of experience in the ocean.” “I develop relationships with the locals around me. They come back every summer, and they know me,” says Pat Hunt. Photo by Dave Moser

The “city folks”—as Pat Hunt describes his coworkers at Daikin Applied in Jersey City—live far from the Jersey Shore and are fascinated by his side gig. “Every Monday they come in and say, ‘Did you save any lives this weekend?’” says Hunt, who works as a lifeguard in Ocean Grove every weekend. “It’s my little getaway from the 8-to-5 grind of Monday to Friday.”

Hunt works in sales from the Jersey City office of the commercial HVAC company. His affinity for sales is seen on the sand, too. “I develop relationships with the locals around me. They come back every summer, and they know me.”

Hunt has been a beach rat and surfer his whole life, growing up in Point Pleasant Borough. But he was never a lifeguard, working instead as a beach cleaner as a teen. “You didn’t get to talk to anybody, which isn’t my personality,” says Hunt. Lifeguarding in Ocean Grove is “my little getaway from the 8-to-5 grind of Monday to Friday,” Hunt says. Photo by Dave Moser

When Hunt bought a home in Neptune City about seven years ago, a friend asked if he wanted to be a lifeguard on weekends. “It was a great way to get to know people in my area,” Hunt says.

Hunt has been a weekend-warrior lifeguard ever since. Hunt doesn’t call the gig relaxing, because he is responsible for people’s health and safety. But guarding is a nice break from his sales job. “I would call it a mental-health job, if that makes sense,” he says. “I’m sitting on the beach, getting tan and talking to people all day long.”

Hunt, who has a mechanical-engineering degree from Stevens Institute of Technology in Hoboken, has no plans to hang up his whistle. “I’ll do it as long as I can, as long as I’m physically able. I think I’ll try to be doing it forever,” he says. “It’s a break from my real job, a change of pace and a change of scenery as well,” says Abigail Buckley. Photo by Dave Moser

In March 2020, as Covid-19 began raging, Abigail Buckley started working at Jersey Shore University Medical Center as a respiratory therapist, helping to treat patients who have breathing issues. “It was orientation by fire,” she says. “It was definitely intense.”

When summer came that year, Buckley found an escape by lifeguarding in Belmar, which she has done since the age of 17. Because she works nights in the intensive care unit, Buckley guards on the beach one or two days each week.

“It’s a break from my real job,” she says. “It’s a change of pace and a change of scenery as well.” Buckley swam competitively in high school and at Westchester University, where she majored in respiratory therapy. When looking for a summer job during high school, lifeguarding was a logical choice. For years, Buckley’s siblings have also guarded in Belmar, where they all live: Amelia works as a teacher, Joe is studying for the MCATs, and Thomas recently graduated from Matawan High School.

“We all swam. We all were very good in the water,” says Buckley. “It’s cool that we still do it. It’s something that keeps us close.”

Buckley has made several saves during her eight years as a lifeguard, but she has not yet used her respiratory-therapy experience on the beach. But the lifeguard gig has a similar goal as her health care job: helping people, whether it’s a lost child on the beach or someone struggling in the surf. “You are doing something to make the day better for people,” she says. 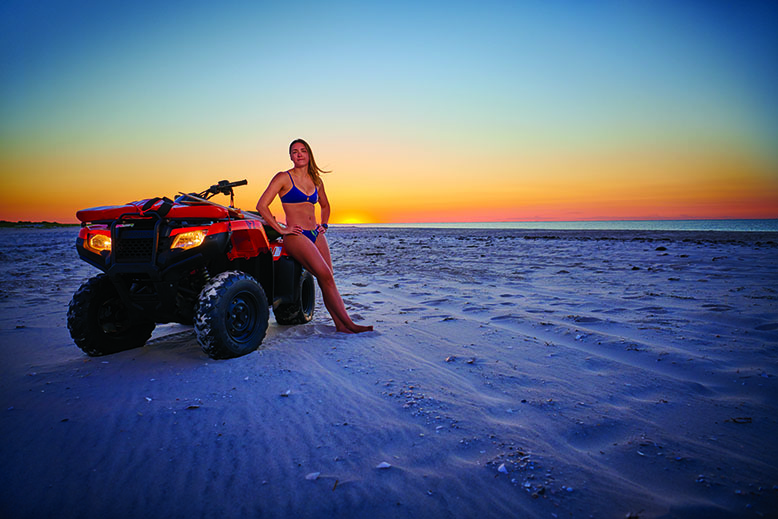 “Growing up on the beach, I wanted to take full advantage of where I lived, so having a job on the beach was a great opportunity,” says Laura Patterson. Photo by Dave Moser

When Laura Patterson landed her first nursing job last year, the hospital offered early July or late August as a start date. Patterson didn’t hesitate. “I told them I had prior commitments so I could have one more summer to be a lifeguard,” says Patterson, who began working at Princeton Medical Center in August of 2021.

Patterson soon realized having a “real job” didn’t have to mean the end of guarding. Working the night shift in the emergency department, Patterson can block her schedule to include shifts as a lifeguard in Barnegat Light on a day off, allowing for rest days, too.

“I feel lucky because we work 12-hour shifts,” says Patterson, of Lambertville. “Not everybody who starts a full-time job has that flexibility to continue lifeguarding.” Laura Patterson, a Barnegat Light native, has been lifeguarding for six years. Photo by Dave Moser

Born and raised in Barnegat Light, Patterson joined the junior-lifeguard program there at age 12. After stints as a waitress, she became a lifeguard at age 18. This is her sixth year on the stand. “Growing up on the beach, I wanted to take full advantage of where I lived, so having a job on the beach was a great opportunity,” she says.

She has also been part of Barnegat Light’s first aid squad since age 15, which helped her realize she wanted to work in the medical field. Spinal injuries, sting-ray wounds, fish hooks embedded in feet, and heat emergencies—Patterson sees those and more as a lifeguard. “Now I know the pre-hospital part and the in-hospital part. So having that extra experience will help me make better decisions as a lifeguard,” says Patterson, who earned her bachelor’s in nursing from Monmouth University. “It’s like an extra skill set I’ll have at the beach this year.” 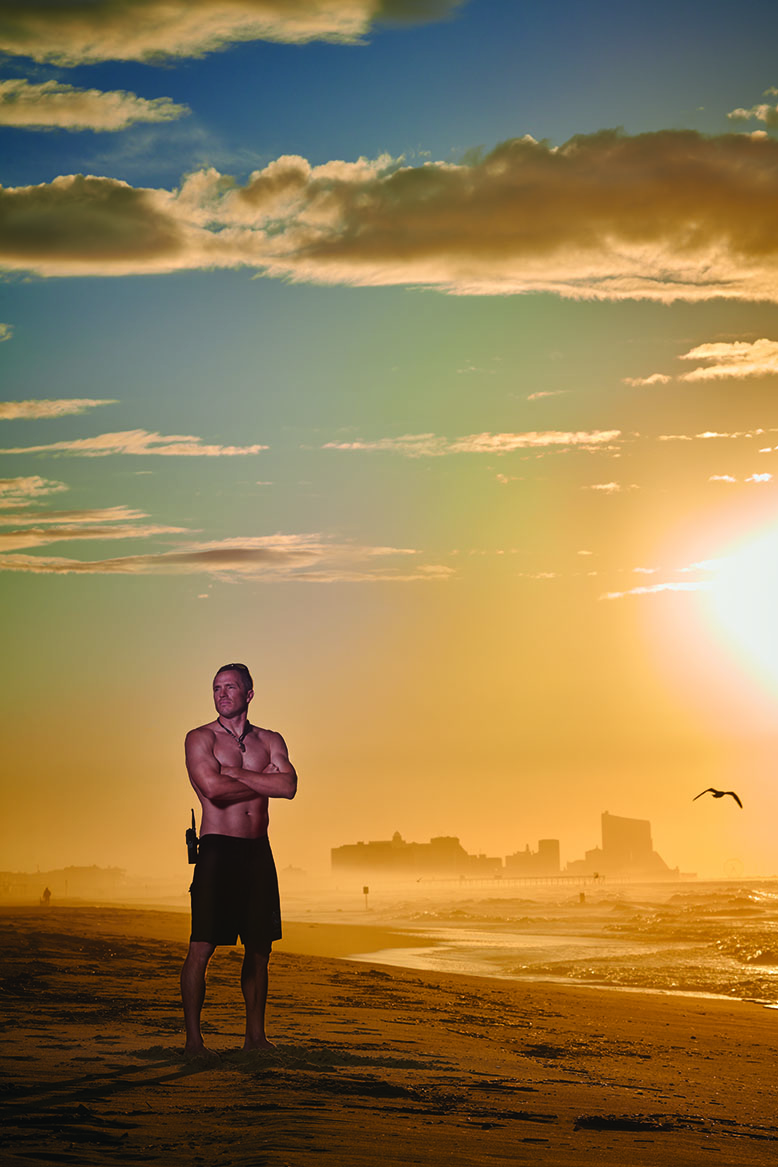 “One of our goals is to keep the traditions of the Longport Beach Patrol going so it’s there for our kids,” says Tim Schwegman. Photo by Dave Moser

For Tim Schwegman, lifeguarding is a family affair. His father, several uncles, and his brother have all been guards. “They got me prepared,” says Schwegman, who became a Longport guard 22 years ago at age 14.

When Schwegman was considering careers after graduating from Stockton University, continuing as a lifeguard was one factor. After passing the firefighter exam, Schwegman landed a job with the Atlantic City Fire Department. “That gave me the opportunity, with the schedule, to keep doing my summer job with the Longport Beach Patrol,” says Schwegman, a firefighter assigned to the rescue truck. “I wanted to be able to stay on the beach patrol and have a career path.”

Schwegman’s two jobs can overlap—the fire department handles water rescue calls when lifeguards are not on duty, and he has been first on the scene at car accidents near the beach-patrol station. “They are intertwined,” he says. “But sitting on the beach, you’re looking and preventing rescues and accidents. At the firehouse, you’re stationed waiting for a call to a fire or accident.” 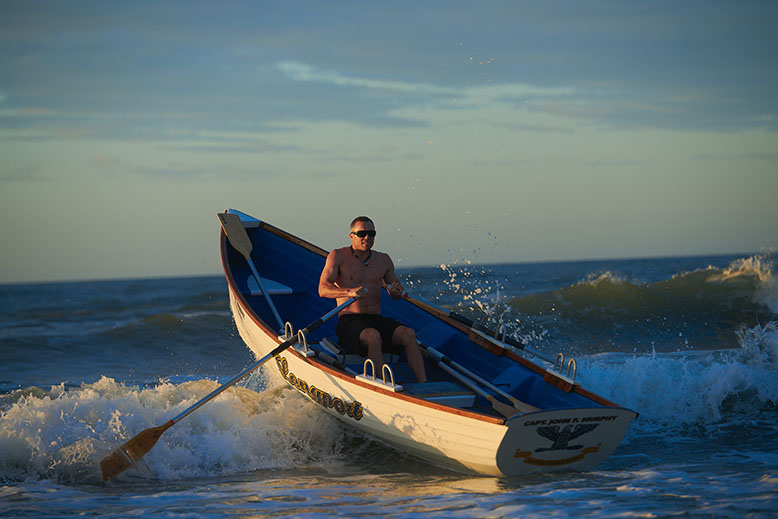 With both jobs, Schwegman works 88-hour weeks during the summer. The guarding gig alleviates some stress from the firefighting job, he says.

When he was sitting on the 26th Street stand years ago, the woman who would become his wife, Tess, frequented that beach. The Margate couple now has two children. “One of our goals is to keep the traditions of the Longport Beach Patrol going so it’s there for our kids,” he says. “I hope it’s as good for my kids as it is for me.”

Sharon Waters is a writer in Bloomfield who was a lifeguard as a teen.