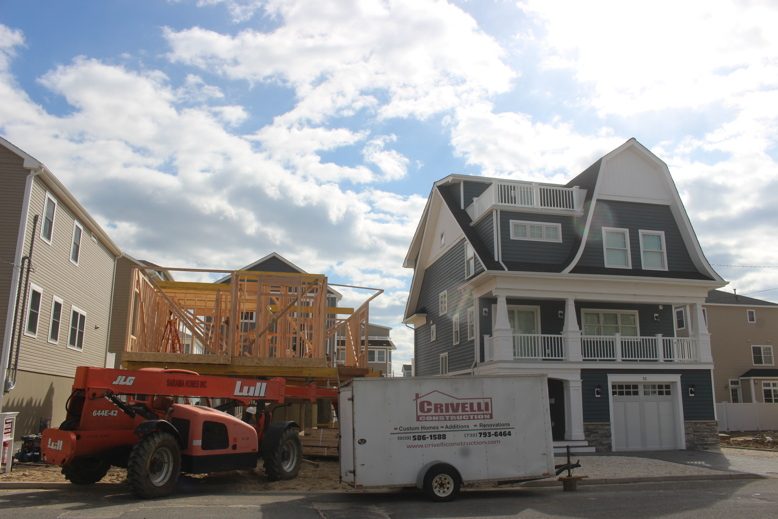 It’s been almost six years since Hurricane Sandy slammed into the Shore, but plenty of places still bear the storm’s aftereffects—and none more than Ortley Beach.

After most of its homes were flooded or damaged by the storm, Ortley Beach—which is part of Toms River—is undergoing a transformation. The once solidly middle-income neighborhood is now a patchwork of empty lots, repaired older cottages, and an abundance of new, luxury homes that can sell for $1 million or more, and rent for more than $4,000 a month.

“It’s the shiny penny of the Jersey Shore right now; so much of it is new,” says real estate broker Tim O’Shea of Keller Williams Real Estate in Ortley Beach.

The new construction has changed both the housing prices and the vacation experience at Ortley Beach. Beachgoers who remember the old Ortley are nostalgic for the days when families of modest means could squeeze into tiny bungalows—many of them passed down for generations—and enjoy their sandy little piece of paradise without busting their budgets.

“You’d pay the taxes and you’d have some fun during the summer, and you’d lock the door on Labor Day,” says O’Shea.

But times have changed, and many of those families are gone, having sold their properties because they couldn’t afford to rebuild or elevate their homes, or face higher flood insurance costs.

While Sandy hastened Ortley’s transformation, the changes reflect a longer-term trend at the Shore. In many towns, modest older cottages have been replaced or upgraded to satisfy beachgoers seeking more upscale accommodations.

And the storm didn’t just affect the property markets. Sandy also destroyed Ortley Beach’s popular nightspot, Joey Harrison’s Surf Club, which was right on the beach and which offered teen nights and oldies nights, as well as a nightclub scene.

“It’s gone now, and that’s sad for a lot of people,” says O’Shea. On the other hand, he says, losing the club has boosted property values in the beach blocks nearby. While the club was open, homebuyers would often think of the potential for noise, crowds and litter, and say, “I don’t want to be around here.”

Without the Surf Club or a commercial boardwalk in Ortley Beach, visitors looking for a little excitement head to the next town south, Seaside Heights.

“People who rent in Ortley, everybody still likes Seaside Heights,” says Stephen Krug of Birchler Realtors in Ortley Beach. “Even if you want to be away from all that energy, you’re going to go there one or two nights during the week. That boardwalk is still important to us.”

“You have new investors and new money,” he adds.

“We’re starting to rent places that are well into the $4,000s,” agrees O’Shea. “That would have been unheard-of prior to the storm.”

The rising property values mean that investors who bet on Ortley Beach right after the storm are pretty happy they did.

“Five years ago, I said I should buy a bunch of properties in Ortley Beach,” says broker Lee Childers of Childers Sotheby’s International Realty, with six offices at the shore. “Did I? No. But I wish I had.”