When you are producing an event like last night’s 10th Anniversary New Jersey Hall of Fame induction ceremony, it’s good to have a surprise up your sleeve. What could be a better surprise than an appearance by Bruce Springsteen?

Much to the delight of the packed house at the Paramount Theatre in Asbury Park, Springsteen appeared in the final moments of the 2-1/2-hour show, inducting his friend Miami Steven Van Zandt. The two longtime band-mates performed together for the show’s closing musical number.

It was a fitting end to an entertaining evening—one of the Hall of Fame’s most satisfying shows in a history of induction ceremonies that sometimes lacked star power. Not so at last night’s event, which honored the Class of 2017.

Springsteen was one of three members of the original Class of 2008 to take part last night. Montclair-bred astronaut Buzz Aldrin, the second man on the moon and a 2008 honoree, provided the induction for fellow astronauts Mark and Scott Kelly, natives of West Orange. Former senator Bill Bradley, also inducted in 2008, did the honors for Pulitzer Prize-winning author/journalist Anna Quindlen, a member of the 2015 class who was officially inducted last night. Recalling her start as a “copy girl” at the New Brunswick Home News (now the Home New Tribune), Quindlen sounded the evening’s most political note, reminding the audience that, “a free press stands between us and disaster.” 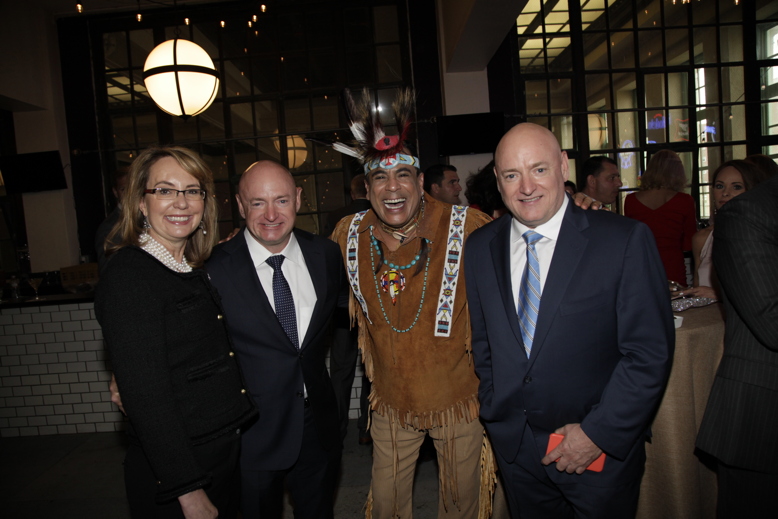 The Class of 2017 inductees also included author Harlan Coben; entertainers the Four Seasons, Gloria Gaynor and Debbie Harry; sports figures Al Leiter, Carli Lloyd and Mary Decker; and, in the enterprise category, publisher Steve Forbes, businessmen John Hanson and Joe Buckelew, and celebrity baker Buddy Valastro. All but Decker appeared at the ceremony. The pioneering nurse Clara Maass and politician/diplomat Millicent Fenwick were honored posthumously (Meryl Streep, a member of the Class of 2008, was scheduled to appear for a belated induction, but bowed out, citing a scheduling conflict.)

Whoopi Goldberg—a New York native who lives in West Orange—served capably as the show’s host, marveling at the “brain power” that comes out of New Jersey. She set an affable tone for an evening that included endless shout outs for the Garden State. While inducting baseball’s Leiter, comedian Joe Piscopo (Class of 2013) went as far as calling New Jersey “the foundation of the United States of America.”

Memorable moments were abundant. New York Yankees great Mariano Rivera was on hand to honor his friend, Hoboken-born Valastro. Rivera received a loud welcome from the audience, as did Arizona politician and gun-control advocate Gabrielle Giffords, who appeared with her husband, Mark Kelly. Astronaut Aldrin, a spry 88, did the moonwalk, and Gaynor, the Newark-born, disco-era star, performed an energetic “I Will Survive.” Asbury Park talent was much in evidence. Musician Glen Burtnick, a local resident, was the evening’s bandleader. And Felipe Rose, an original member of the Village People who lives in Neptune, was on hand to induct Gaynor. Rose, the Indian in the Village People, appeared in a feathered headdress. Later in the show, Governor Phil Murphy deadpanned that wife Tammy Murphy had left New Jersey to tour with the Village People.

But the biggest thrill was the introduction of Springsteen to induct Van Zandt. It was Miami Steve’s second induction; he previously entered the Hall of Fame in 2012 as a member of Springsteen’s E Street Band.

In his induction speech, Springsteen declared that there is “no purer distillation of the Jersey ethos than Little Steven Van Zandt.” He described the Van Zandt as “one of the greatest living white soul performers and writers.” On a lighter note, Springsteen credited Van Zandt for the “sole creation of the male babushka,” adding, “He’s the only man I know besides Hugh Hefner who has figured out how to spend his whole life in his pajamas.” Celebrity baker Buddy “The Cake Boss” Valastro, pictured with his family, was among the night’s honorees. Photo by Gary Gellman

For his part, Van Zandt credited destiny for bringing him together in New Jersey with both Springsteen and David Chase, creator of TV’s The Sopranos in which Van Zandt performed memorably as mobster Silvio Dante. Of his years with Springsteen, he said, “We did the impossible—we made New Jersey hip.”

In an interview for the May issue of New Jersey Monthly, Van Zandt told correspondent Tammy La Gorce that he would not perform at the induction ceremony. But after his speech, his touring band, the Disciples of Soul, joined him on stage for a performance of “Soulfire,” the title song of his latest album. And for a fitting grand finale, a guitar-less Springsteen joined Van Zandt to perform “I Don’t Want to Go Home,” a song Van Zandt wrote as a member of Southside Johnny & the Asbury Jukes.

Members of the Hall of Fame are chosen annually in a multistep process that culminates in a public vote. The Hall of Fame board chooses additional inductees. Details and the historic list of inductees can be viewed at njhalloffame.org.