As a kid, Christopher Maier didn’t plan on making a career out of managing his family’s beloved New Jersey amusement park, Land of Make Believe—even though he started putting decals on car bumpers to help promote it at six years old. “I was planning on a career in public policy,” he says. “I had already done an internship in a congressional office, but when the family calls, you can’t say no,” he says.

More than half a century later, Maier says he “wouldn’t change a thing” about the path he’s taken to keep the fun alive for families all over the state.

In 1954, one year before Disneyland opened in California, Maier’s father, a Brooklyn native, businessman and music teacher named Hermann Maier, bought a dairy farm outside of Hope in Warren County and opened it as an amusement park, giving it the wondrous name Land of Make Believe. His creation set in motion a wave of new roadside-attraction parks throughout the Garden State. Land and gasoline were inexpensive then, and the new interstate highway system was opening up vast new areas for suburban development in New Jersey. More than a million new residents moved to the state in that decade alone, and entire neighborhoods were created with new homes, schools and playgrounds to accommodate the growing families whose children would later be know as the Baby Boom generation.

To meet the demands of these new families, entrepreneurs began opening roadside-attraction parks based on cartoon characters, nursery rhymes and Old West tales—hugely popular themes at the time. From one end of the state to the other, these themed parks sprouted like freshly watered suburban lawns to cater to the increasing demand for family entertainment.

These parks weren’t designed to compete with the thrill-a-minute parks lining the Shore from Keansburg to the Wildwoods; then, as now, the world-famous amusement parks constructed atop the boardwalks lining the Atlantic Ocean were hugely popular destinations that attracted millions of visitors every year. Instead, they were meant to offer a different type of entertainment, for the most part focused on passive fun and activities that younger children and entire families could enjoy together.

Sadly, most of the parks constructed in the 1950s and 1960s are now gone, artifacts of another time and place. One by one, many of these parks—including Children’s Storybook Farm in Parsippany, Kiddieland in Pennsauken, Cowboy City in Farmingdale, Days of Fun in Florence, and Storyland Village in Neptune City—met the wrecker’s ball. They—and other well-known parks such as Casino Amusements in Asbury Park, Olympic Park in Maplewood, and, most famous of all, Palisades Amusement Park—fell victim to increasing land prices, labor costs and taxes, and competition from mega-parks such as Florida’s Disney World and, closer to home, Six Flags Great Adventure in Jackson Township.

Today, only a handful of these smaller parks remain—including Land of Make Believe. Thanks in part to perseverance and the willingness of the families who own them to adapt to changing times, they continue to offer first-rate opportunities for multi-generational family fun—with a large dose of nostalgia. “New Jersey has a unique concentration and variety of parks that few states can match,” says Jim Futrell, historian for the National Amusement Park Historical Association and author of the book Amusement Parks of New Jersey. “These parks are family owned, and they work because there is a commitment to maintaining them from generation to generation.”

Land of Make Believe was designed to be a place where “stories and songs come to life” and where parents and children could share the fun. Nearly 70 years later, it is still a place where New Jerseyans of all ages can enjoy a day together in a family setting. That’s why it has gained icon status.

“We still offer rides for little children as well as teens and their parents,” says Maier. “We’ve adapted to changing tastes, adding thrill rides and a water park, but we’re still a place that offers wholesome, safe and affordable fun for the whole family.” Not too far from Land of Make Believe is an attraction with a different theme, Wild West City. Opened in 1957 in Netcong, it competed with other Western-themed attractions that have since closed, and it almost went out of business in 1963 until it was saved by Michael Stabile Sr. His family has owned it ever since.

Originally designed to resemble Dodge City, Kansas, in the late 1800s, when famed Western lawman Wyatt Earp patrolled the streets, Wild West City features more than 20 buildings along a 400-foot dirt street. Initially, it only offered horseback, stagecoach and train rides, and over the years added more exhibits, such as a one-room schoolhouse, miniature golf and the Golden Nugget Saloon. To embrace the action of the Old West, the park also offers continuous live entertainment, including a stagecoach robbery where children are deputized to catch the bad guys.

Wild West City is “a place that allows people of all ages to use their imaginations and get away from the real world for a unique experience,” says Frank Benson, the park’s third-generation owner. “For a few hours, they put down their cell phones and get to experience what life was like way back when on the American frontier.” 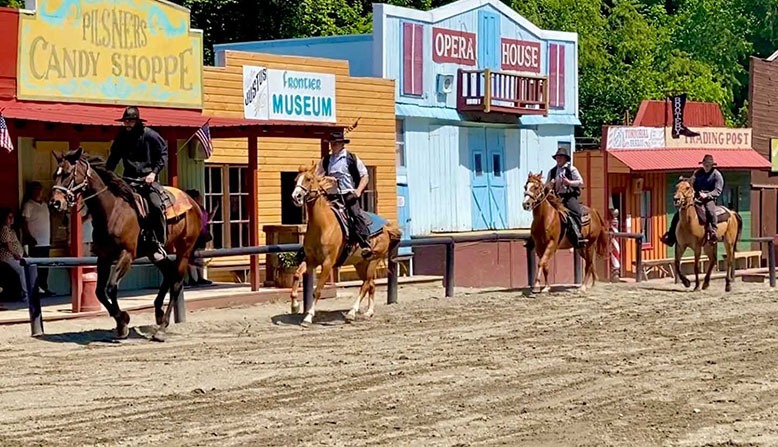 The National Day of the Cowboy historic preservation organization last year awarded Wild West City one of its three Cowboy Keeper Awards for its “preservation of pioneer heritage and cowboy culture.”

Benson attributes the park’s longevity to “the faith and passion” his family has invested in it, but adds that they have had to evolve with the times. Accordingly, the park now offers a Halloween-themed experience on fall weekends.

Much farther south, the Fricano family has, for decades, strategically embraced New Jerseyans’ love of the Shore. Rather than locate their site far away from the world-famous amusement parks of the coast, the Fricanos opened an attraction 10 miles west of Atlantic City on the Black Horse Pike in the Cardiff section of Egg Harbor Township. The reason? To cater to families on their way to and from the beach. Since its opening in 1955, Storybook Land has captured the imaginations of children and adults with an array of nursery rhyme-themed attractions, from the Three Bears House and Jack and Jill’s Hill to areas inspired by Humpty Dumpty, the Old Woman’s Shoe and the Little Red Schoolhouse.

Its Alice in Wonderland attraction is “one of the most creative family-oriented walk-through attractions found in any amusement park,” says Futrell, whose organization named Storybook Land one of the nation’s best-preserved parks.

Jessica Panetta, the park’s co-owner/operator and granddaughter of the original founders, says her grandparents started the park because “there were few [such] places outside of the Boardwalk in Atlantic City, and land was cheap in those days.”

The park is geared toward children aged 1-8, says Panetta, who has been involved with Storybook Land since childhood. She, too, attributes its longevity to its family ownership and notes with pride “that we opened before Disneyland.” “With a family-owned park, you can pay more attention to detail, especially for the kids, and we can make decisions and changes quickly, without running everything up the corporate ladder. Chances are, if you call the park, we will pick up the phone,” she says.

To keep up with the times, Panetta says the park has added various rides, school trips, and a Christmas lights exhibit that keeps the park open on weekends through December. The holiday exhibit was even featured on ABC’s The Great Christmas Light Fight show in 2020. Plans are also in the works to add a roller coaster “in a year or two,” Panetta says.

These parks have overcome many obstacles to stay in business for so long, but none more challenging than the Covid-19 pandemic, when even the good guys at Wild West City had to don masks. “Never in six decades did we think we’d be forcing the marshal of Wild West City to wear a mask, just like the bad guys,” says Benson.

The people who run Land of Make Believe, Wild West City and Storybook Land note that they had very tough times in 2020, with delayed openings, smaller crowds and mask requirements, but their owners say business picked up in 2021, and they expect a return to normalcy this year.

Despite these and other monetary challenges, many park owners don’t want to let go of their dreams easily.

The owners of Fairy Tale Forest in the Oak Ridge section of West Milford say the pandemic forced them to close down their operations in 2020, but they remain hopeful about reopening in the future.

In Camden County, Clementon Park and Splash World, a larger and more traditional amusement park, was saved from destruction a few years ago by Gene Staples, a Chicago native who purchased it on the auction block and reopened the park with some new attractions set in a traditional atmosphere, including the original trolley line. Train companies used to build parks as a way of extending their service lines and increasing ridership; Clementon is the last trolley park in New Jersey and one of only twelve left in the entire country.

Staples, who also rescued a famous park in Indiana that he visited as a child, is a “hero to fans of amusement parks,” Futrell says.

On the other end of the state, some restoration has been undertaken at Gingerbread Castle in Hamburg, not far from Fairy Tale Forest.

Like the owners of Wild West City and Storybook Land, the Land of Make Believe’s Maier believes strongly that the future is bright for his type of park.

“It’s time travel,” Maier says of his park, “and family memories. It was created so parents wouldn’t be passive spectators, but could actually do things with their children. So parents feel they can be a kid with their kids.”

Parks historian Futrell, meanwhile, says these small parks are unique and unlikely to be replicated. “Roadside attractions used to be a way of getting into the amusement park business, but today, people looking to get into the business are likely to open a place with rides and games,” he says.

Joseph Lauro is a speechwriter, freelance writer and editor.