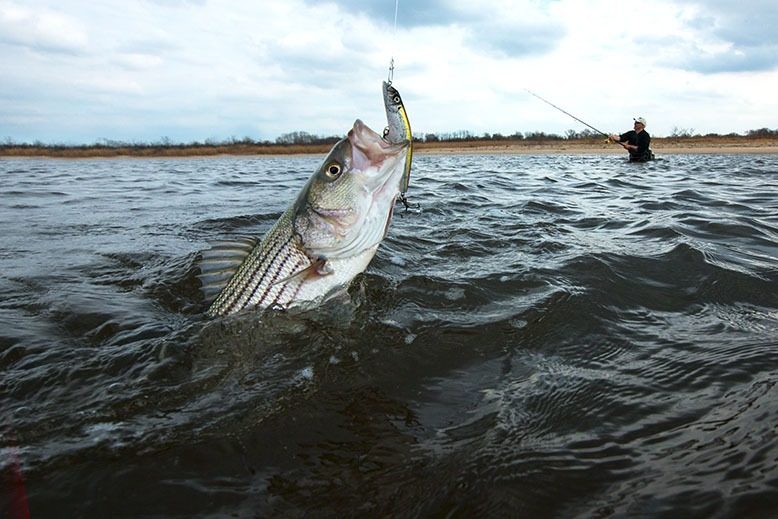 That night, McReynolds would land the fish—and story—of a lifetime, a 90-minute-plus battle that eventually brought him down into the drink, almost on top of the beast, where he shoved his hand under its gill plate and bear-hugged the 78.8-pound striped-bass world record.

That fish would forever cement the Garden State as sacred waters for the species.

“New Jersey is one of, if not the top place to catch striped bass anywhere on the planet,” says Lavallette’s Nick Honachefsky, a 48-year-old angler, fishing journalist and host of the television series, Saltwater Underground With Nick Honachefsky.

Known scientifically as Morone saxatilis, striper are a migratory species found in the ocean, bays, rivers and tributaries—living in saltwater, but swimming up coastal rivers into brackish and even freshwater to spawn. They can be fished March through December, but the highlight of the year is when they migrate in the spring and fall. “During the fall run, you can see them blitzing, feeding thick in the surf, literally getting washed up in the waves and bouncing off your legs. That kind of excitement has always resonated with me,” Honachefsky explains.

Across the state, Barry Stevenson, 67, fishes much different waters, but with the same intensity. “My home court is the Delaware River,” he says. “Anywhere from Salem to the Commodore Barry Bridge, all from the bank. I’ve seen that river change from the early ’70s, when it was highly polluted and basically all you caught was catfish, maybe some perch. I’ve watched the Clean Water Act slowly but surely start to take effect. It’s not pristine, but it’s a hell of a lot cleaner than it was.” Barry Stevenson’s godfather introduced him to fishing on the Maurice River, a tributary of the Delaware Bay, when he was 12. Photo courtesy of Barry Stevenson

When striped bass follow bait into local waters, they cause a fever among New Jersey fishermen. And while other species require expensive boats, complicated tackle and hundreds of dollars of fuel to head far into the ocean, these “linesiders” are the everyman’s trophy fish, offering the opportunity for pretty much anyone to land a massive catch.

Striped bass are fished by boat off the pristine shores of Island Beach State Park and all the way inside Newark Bay. Brave anglers chase them through cold water on kayaks. They’re hooked from huge party boats and little skiffs off sod banks. Fishermen target striped bass from shorelines and bridges way up the Delaware River to the Water Gap. And surfcasting for stripers is woven into the cultural fabric of all 127 miles of New Jersey’s beachfront.

“Anyone can go out there, whether it’s a sportfishing boat, from a pier, the surf, inside the back bay or from a jetty. Bass can be anywhere because they’re a migrating species—I think that generates the excitement,” grins Honachefsky. On the banks of the Delaware, Stevenson agrees.

“Most of the time, if you’re chasing a fish as big and strong as a striped bass, you’re spending an exorbitant amount of money. But you can go to a department store and get a 7-foot rod-and-reel combo with a pack of bloodworms for $50, meet down on the river and [fish for striper]. You can absolutely land a trophy fish.”

Stevenson grew up in Vineland. His godfather introduced him to fishing on the Maurice River, a tributary of the Delaware Bay, when he was 12. After his years at Bloomsburg University, he began investing more time in fishing. He and his wife, Victoria, settled in Woodstown, Salem County. “I can show up in the morning, catch that tide just turning to go out. There are certain moons we wait on. When it’s all lined up, the hair on the back of my neck will stand up,” Stevenson laughs.

Stevenson fishes bloodworm balls as bait—multiple bloodworms packed into a small mesh bag that he ties himself. Or he uses chunks of Atlantic menhaden known as bunker, a common baitfish, one of the most important animals in our coastal ecosystem, and one that striper chase regularly. Honachefsky grew up in Clinton. He first went saltwater fishing at six years old, when his father took him to Island Beach State Park, igniting a lifelong passion. He thrives on fishing in brutal nor’easters, “trying to throw a plug into a 35-mph wind at this mean green water. Maybe it gets hit by a 25-pound bass, challenging you in that surf. You can literally get sucked in and drown. Or, when you’re fishing at night, standing in the dark water, imagining what else is in the water with you: All your senses are on alert, listening for a slurp or trying to smell the bait. That’s just so exciting.”

After graduating from Villanova, Honachefsky moved to Normandy Beach when he was 22, and his first jobs in the industry were managing a tackle shop and working for the Fisherman magazine in Point Pleasant. He left to pursue a living as a freelancer, writing for “every fishing mag that has ever been in existence.”

In 2014, he cohosted a show called Hookin’ Up With Nick and Mariko, his first foray into television. Five years ago, he went all in with Saltwater Underground With Nick Honachefsky, which has aired on the Sportsman Channel, Waypoint TV and, as of this winter, Discovery Channel.

Honachefsky fishes on any boat or beach where the bass are. He lives for the mayhem of the fall run, driving his buggy on the beaches of northern Ocean County, looking for the telltale signs of striper. He enjoys both targeting bass on lures as well as what he calls wait-and-bait fishing.

“But lures are another level. You try to match the hatch (look and movements) of the lures with the baitfish that are in the water—swimming plugs, metal or poppers. It’s a really dynamic way to fish. You can get a really aggressive strike. It’s exciting when you see a bass jump out of the water and blow out your popper. Or when you haven’t had a hit in a hundred casts, then you get whacked and your line gets tight.”

He explains that, even though areas of the state’s estuaries may become urbanized, bass won’t change their innate patterns. “They’re still going up those backwaters to spawn out. They’re still going to migrate up and down the coast. You find bass by the Statue of Liberty. People don’t realize those bass are still in the marsh banks of Jimmy Hoffa’s Meadowlands. I’ve fished way up the Raritan River by the Driscoll Bridge. It’s sketchy. Fishermen have had their gear stolen and knives pulled on them. You’re fishing these industrial areas, but the fish are there!” Honachefsky says.

The spring run starts in March and goes to June. The fall starts in late October and runs to the end of the year. By veteran anglers’ accounts, both seasons seem to happen later than they used to.

Striper don’t bite prey like a shark or even a bluefish. Like their freshwater cousins, they tend to just inhale bunker, sand eels, crabs, eels and pretty much anything else swimming off our coasts.

Rules around striper can be complicated and are always hotly debated. New Jersey anglers are only permitted to keep one striper per day, and it must be between 28 and 38 inches. The smaller ones are allowed to grow, and the larger ones are super-breeders. Both fishermen are committed to conservation of the species; Stevenson says he never keeps bass, and Honachefsky releases about 99.9 percent of his catches.

Anyone targeting striped bass must register with New Jersey Fish and Wildlife’s Saltwater Recreational Registry Program, which is free. No one is permitted to target striper beyond the 3-mile line in the ocean, and bass fishing is restricted in January and February.

“I love that New Jersey has protected the bass stocks. In the ’80s, they were almost legally extinct from commercial overfishing. Maryland put a moratorium on fishing them recreationally and commercially in the mid-80s. Then the stocks started to rebound. It’s really a success story,” Honachefsky muses, “as long as we don’t mess it up.”

Striped bass are also a vital part of the economy in coastal areas, specifically for Shore towns in what they call their shoulder seasons, before and after the summer. Anglers drop money not only on boats, marina slips, bait, gas and tackle, but also, increasingly, on restaurants, rentals and hotel rooms. According to the most recent Economic Contribution of Recreational and Commercial Striped Bass report by Southwick Associates, an outdoorsmen research firm, that number was $1.5 billion in 2016, 80 percent of which was for boats and fishing gear. The number goes up depending on the health of the fishery, which has become an economic motivation to protect them, in addition to the traditions of fishing.

“One thing that has always made an impression is how willing anglers are to accept conservative regulations when it comes to striped bass. They really want to protect the stocks for recreational fishing and for future generations,” Celestino says.

Striper also serve a social function. “I’ve made so many good friends strictly around fishing,” says Stevenson. “Come November or March, we talk to each other every day like we’re family. Most of my fishing friends and I have nothing in common—politically, racially, religiously. But I like the diversity, because that makes me grow. We all have love for the river, fishing and conservation in common. Sometimes it’s just about going and hanging out with the buddies. Catching something is a bonus. We might work over someone going through chemo for the first time. One of the guys had already went through it and will tell how they handled it. No fish were caught, but we helped someone through something.”

McReynold’s world striper record was broken on the Connecticut side of the Long Island Sound in 2011, and McReynolds passed away in 2020.

Records don’t mean much, except in folklore. But with the dropping December water temps and those hungry fish heading down from Long Island, nothing much matters besides the bite.

Season 3 of Saltwater Underground will air on the Sportsmans Channel in January.