Shrimp with guanciale in Hennessy cognac tomato sauce on polenta and grits.
Photo by Brent Herrig

Why I love Marcus B&P: It plays with soul food classics like fried chicken and waffles in ways that transform them. It adds grace notes from chef Marcus Samuelsson’s Ethiopian and Swedish upbringing to dishes that reflect Newark’s multicultural heritage. The staff is singularly youthful, devoted and local, and the atmosphere is the beautiful opposite of pretentious. Here, at last, is the destination restaurant Newark deserves.

Among celebrity chefs, Samuelsson’s credentials stand out. He is a James Beard Award-winning chef (for Aquavit in Manhattan), an author, a TV personality, and the co-owner of 33 restaurants worldwide, including his flagship Red Rooster in Harlem. Marcus B&P, his newest project, opened last November in the former Hahne and Company building, a grand and imposing space beautifully restored by Samuelsson’s business partner, Ron Moelis, founding director of L+M Development Partners.

“Communities like Newark have always interested me,” Samuelsson says. “The blend of cultures make them rich. When I heard about Ron and the city opening its first Whole Foods, and I considered Audible’s commitment to Newark, and that Rutgers, the Newark Museum, and Prudential were already there, I thought, Now is the time.’”

Samuelsson and James Bowen, executive chef and director of culinary services of the Marcus Samuelsson Group, designed dishes that incorporate aspects of Newark’s Italian, Portuguese, Caribbean and African-American cuisines. The chicken and waffles are distinguished by chicken thighs marinated in buttermilk, fried crisp and juicy, and served under a pile of deliciously tangy pikliz, the Haitian version of slaw. 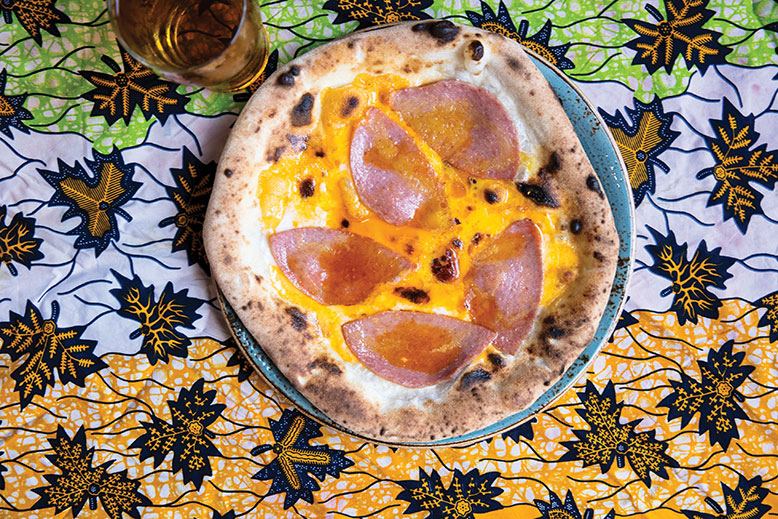 The crusts of B&P’s fine pizzas emerge puffy and gorgeously blistered. The Nine Seven-3, named for the area code that includes Newark, is deservedly popular. (Red Rooster does not serve pizza or pasta, which Samuelsson says he regards as more in Jersey’s food DNA.) Topped with Taylor ham, cheddar, an egg yolk and chili oil, it improves on the state’s favorite breakfast sandwich.

The quality of these dishes is hardly a surprise, given the history of their creator. Born in Ethiopia, Samuelsson, at 3, and his sister were adopted by a family in Sweden. Inspired by his grandmother, he learned to cook and eventually graduated from the Culinary Institute of Gothenburg. After a year in France, he emigrated to America and in 1994, at 23, became executive chef of Aquavit. From there his ascent was steep. In 2009 he was invited to prepare the first state dinner at the Obama White House.

The initials BP stand for back pocket, a translation of the Swedish term for a restaurant where people can just drop in. The ampersand represents a second meaning, bar & provisions, reflecting the liquor license and that market items are sold. Whichever, the place is beautiful. With just 55 seats divided between the bar and the dining room with open kitchen, it’s small, but the tall ceilings impart a feeling of grandeur and space. The large painting on the front room’s exposed brick wall is of singer Lauryn Hill, who was born in nearby East Orange. Other decorative objects, such as album covers, celebrate Whitney Houston, Queen Latifah and Frankie Valli, all of whom were born in Newark.

The cocktails are potent, and the bar, with its neon-lit shelves and stunning turquoise-and-copper counter, is dazzling. Crème de Violette gives the Aviation, a classic mix of gin, lemon and brandy-based liqueur, its alluring, pale-violet glow. The bartender serves it icy and does not stint on the gin. All the cocktails but one are priced at $12, a bargain. The Halsey Hooch is popular not just for its $9 price. Named for the narrow downtown street just outside the door, it’s a bracing and balanced combination of Jim Beam, Ethiopian honey wine and mulled blackberries.

At a restaurant with African-American bona fides, you expect good cornbread. The version at B&P is better than good. Cooked in a small cast-iron pan, it has a crisp, brown crust, a fine crumb and a moist interior. (The fragrant honey served with it is from Tassot Apiary in Milford.) I don’t think I’ve ever had a better one. 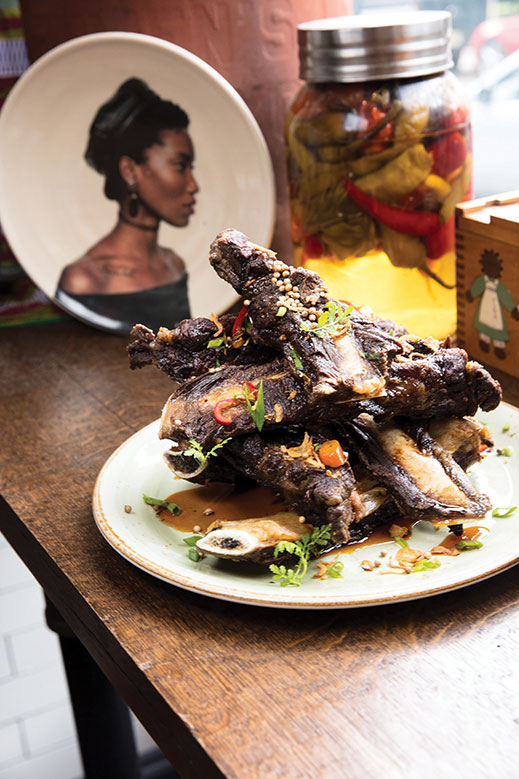 Touchin’ Ribs For Two, at $52 the highest priced item, but worth it. Photo by Brent Herrig

Ribs are sometimes judged by tenderness, but B&P’s offer other charms. Baked, then fried, the beef ribs are brushed with a mix of soy sauce and caramelized sugar. Crisp and brittle, they’re like some sticky, delicious candy. Flecks of mint, scallion, crispy shallots and red chilies add to the pleasure of spooning up the coffee-flavored sauce.

New York City figures into the cuisine as well. Moist, flavorful salmon, imbued with pastrami spices, is as rewarding as it is pretty. “I tried the pastrami cure first on gravlax, and then I thought it would be good on cooked salmon,” says Bowen, who consults with Samuelsson every day. “When I tried that, it reminded me of a pastrami sandwich, so I went from there.”

The salmon arrived on a memorably smooth purée made primarily from rye bread and caraway seeds. The fish settled amid a tangle of shredded, cured kohlrabi, sweeter and more crunchy than sauerkraut. It’s an inspired dish.

The Ethiopian accents also add appeal. Dorowat rigatoni coats the pasta with an Ethiopian bolognese made with chicken instead of beef. The gingery stew is topped with an Ethiopian cheese called ayib, sweeter and creamier than Parmesan, nicely countering the heat.

A side of cauliflower shows the vegetable at its best, blackened but not burned, the florets topped with lemon vinaigrette bright with anchovies.

Were there flaws? The mix of grits and polenta with the shrimp and grits entrée was farina-like and dull. The elf or abalone mushrooms on a vegetarian platter were slippery and strange. Both shortcomings, however, were eclipsed: with the grits, by rock shrimp as sweet and juicy as lobster; and with the mushrooms, a rewarding hash of brussels sprouts and orzo moistened with velvety coconut cream.

In celebration of International Women’s Month in March, the menu featured a baked version of fried apple pie, an invention of the late Edna Lewis, the renowned African-American chef and icon of Southern cuisine. Bowen mixed white cheddar into the empanada-like pie, which had a remarkably crisp crust. It was served with a winey apple-cider syrup and vanilla-speckled ice cream. Let’s hope it becomes a regular fixture on the menu. Runner-up is a near perfect chocolate brownie served beneath a drizzle of caramel syrup and a blizzard of toasted coconut.

Marcus B&P is strategically situated downtown. It is less than a 10-minute walk from the Newark Museum and NJPAC. It is almost as close to Audible headquarters and the Prudential Center. Convenience, however, is only one of its charms. The food is first-rate, the bar stunning, the decor artful and relevant, the crowd diverse in age and ethnicity. In a restaurant owned by Marcus Samuelsson, expectations run high. Marcus B&P exceeds them. The dining room with open kitchen on the left and the bar at rear.