The crabmeat and lobster salad is brightened with peeled grapefruit, mustard oil, tarragon and chives. Photo by Stuart Goldenberg

A place with a #nochickenparm hashtag promises a break from typical Italian-American fare, and that is what Il Nido resoundingly delivers.

The restaurant opened in March in Marlboro, home to more than a dozen Italian-American eateries. Distinguishing itself, Il Nido draws inspiration from the regional cooking of modern Italy.

Tucked into a strip mall, Il Nido (“the nest”) has a simple storefront. When you enter, gracious hosts lead you into one of the two large brick-walled dining rooms, one of which features a stone fireplace. Unlike places that cram in tables, Il Nido spaces them generously. There are just 112 seats.

Chef Joseph Voller, 44, is not Italian, but he’s amassed an impressive résumé. Trained at the Art Institute’s Culinary Arts School in Philadelphia, he worked with notable Philly chefs, including Guillermo Pernot at the now-closed Nuevo Latino restaurant, Pasion, and Jose Garces at Alma de Cuba. In 2015, Voller became executive chef of Eno Terra, a progressive Italian restaurant in Kingston, and began to hone his Italian cooking. There he met Joseph Folgore, president of a Carteret-based welding company.

Folgore, who is of Sicilian descent, was dissatisfied with the Italian restaurants near his Monmouth County home, finding that few met his standards, such as using only the highest quality ingredients, including organics. He decided to open his own place, and recruited Voller to become the chef.

While their concept was still percolating, Voller set off to Philadelphia in 2017 to become executive chef of both Le Virtù and Brigantessa, two of the city’s most highly regarded Italian restaurants. He joined the restaurants’ owners, Francis Cratil-Cretarola and Cathy Lee, on their yearly research trips to Abruzzo in central Italy on the Adriatic Sea. It’s an experience that Voller says helped set the stage for what would become Il Nido.

“The more I kept studying Italy and going back,” Voller says, citing one example, “the less I put on the plate.” The menu changes weekly, based on the best available provisions from places like Local 130 Seafood in Asbury Park and Four Story Hill Farm in Pennsylvania. The restaurant has a partnership with Cherry Valley Cooperative in Princeton, which grows heirloom varieties of tomatoes, squashes, chicory, and hearty greens from organic seeds from Italy.

Voller is not a strict classicist. Take, for example, the soft-shell crab appetizer available during my June visit. He scoops out the raw meat, cooks and then plates the shell, and tops it with a crab cake made from the scooped meat. “If I had to give a percentage, I’d say [the crab cake is] about 93–94 percent crabmeat,” Voller says. As a Baltimore native, I am very picky about the crab-to-breadcrumb ratio in crab cakes; I approve of Voller’s and of the lardo-pepper agrodolce served with it. A bit sweet and sour, it subtly complements the crab’s delicate flavor.

Pastas are stellar and made in-house. Cappellacci (a reference to their hat-like shape) made the perfect delivery vehicle for a slow-cooked lamb ragù exuding a gamey richness. Another ragù, accompanying tagliatelle, was made with Wagyu beef. Combined with 36-month-aged Parmigiano-Reggiano, it seemed both simple and virtuosic. Voller’s black spaghetti—a swirl of squid-ink pasta punctuated by plump, buttery pieces of blue-crab meat, shavings of briny bottarga, crunchy breadcrumbs and diced jalapeño—is a rich elaboration on a Venetian classic. 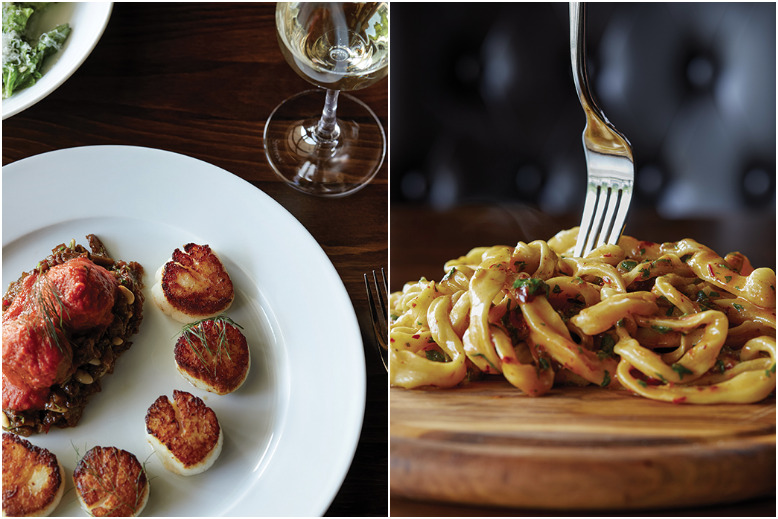 From left: Seared scallops form an arc around eggplant caponata topped with eggplant polpettine (little balls) in tomato sauce; the hand-pulled mugnaia, if done correctly, results in a single strand of pasta about 8 feet long. Photos by Stuart Goldenberg

Perhaps the epitome of Voller’s Italian mastery is his mugnaia, a seldom seen hand-pulled pasta made, if all goes right, of one very long, unbroken strand. He learned to make it in Abruzzo, at Il Ristorante Hotel La Bilancia in the town of Loreto Aprutino. Voller rolls the dough into a cord, pulling it gently until it’s about 8 feet long. “It’s a lesson in simplicity,” Voller says, “but I find it to be one of the greatest things that anyone has ever showed me.”

Voller dresses the single strand in a light, flavorful sauce of cruschi peppers and garlic, then twirls it into a nest. Voller says that “99 percent are in one piece when they go out to the dining room.” I happened to be the unlucky 1 percent. No matter; the chewy, rustic pasta was a special experience you likely won’t find at any other restaurant in Jersey.

The only pasta that lacked luster was mushroom agnolotti. The agnolotti themselves, al dente and stuffed with flavorful mushrooms, were fine, but they were topped with rubbery sautéed mushrooms in a too-rich cream sauce.

One of the most noteworthy dishes was a coppa porchetta, made from the collar of a Mangalitsa pig. Known as the Kobe beef of pork, the Mangalitsa boasts the highest level of unsaturated fat of any pig. Voller’s version, on chanterelles and zucchini, was tender and smoky. Bright threads of wild asparagus laid on top provided visual and flavor counterpoint.

A lamb rack, from Four Story Hill Farm in Pennsylvania, was split into a pair of two-rib chops and grilled a perfect medium. Unfortunately, the components—quartered hakurei turnips, tiny fairy-tale eggplant and an excellent chickpea polenta round—did not sync well with the lamb. (The dish has not appeared on the menu since my visit.)

Seafood, from Local 130 in Asbury Park, changes almost weekly. On one visit, I enjoyed a thick fillet of local tilefish pan-seared in butter, which browns as the fish cooks, exuding a nutty scent. Alongside came eggplant two ways: tangy, smoky caponata and two eggplant polpettine (little balls). The next week, seared local scallops were served with the same elements.

Pastry chef Cynthia Perez,* formerly at Albarino in Shrewsbury, makes all desserts, including a blueberry crostata with a lovely, crisp crust and a filling that bursts with berry brightness. Pistachio cake, featuring pistachios sent by famed Sicilian pastry chef Corrado Assenza of Café Sicilia in Noto, Italy, has a layer of mascarpone mousse in the middle, pistachio mousse on top and a smear of roasted lemon curd alongside. While the dish was a tad sweet, the accompanying scoop of house-made pistachio gelato more than compensated.

[Since print publication of this review, Elizabeth Medina has been named Il Nido’s pastry chef.]