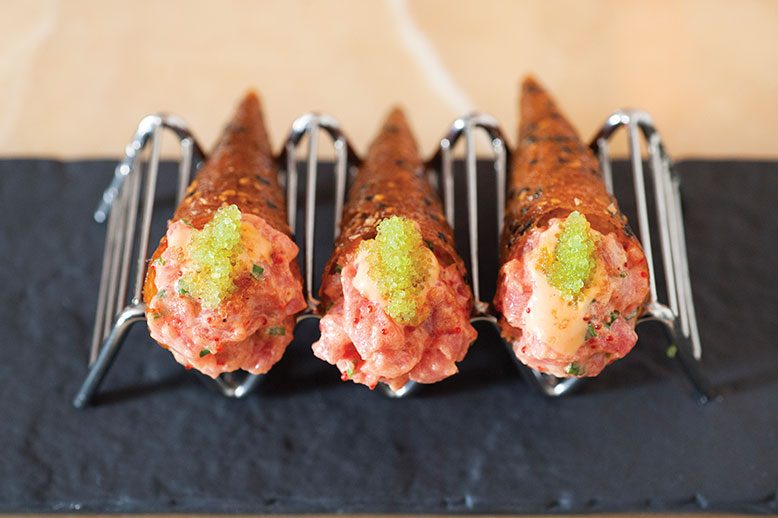 Just what did owner Igor Maller mean by naming his upscale Old Bridge restaurant Just? He just won’t say. “A little mystery is good for a restaurant,” he told me on the phone after my visits. Certainly Just’s location—behind a gas station on a stretch of Route 9, where you’d expect to find takeout pizza—is somewhat puzzling. But there’s no mystery why Just has become popular. Its food, service and vibe are playful, deft and contemporary—just right for the here and now.

Maller opened Just in 2012. A native of Odessa in Ukraine, he emigrated to the United States in the late ’70s, settled in Marlboro and ran an import-export business, traveling to Moscow every two to three months. Unlike the French restaurant he once ran in Moscow, Just is casual, with a swanky nightclub look and a director of marketing whipping up social media buzz.

Executive chef Jonathan Vukusich’s menu has many more appetizers than entrées, inviting diners to fashion their own small-plates tastings. Do it—the more you try, the more fun you’ll have. Take his spicy tuna cones, a winning riff on an early Wolfgang Puck creation. Vukusich adds thick Japanese mayo and sriracha sauce to chopped, sushi-grade bigeye tuna, stuffs the mixture into three house-baked sesame-miso cones and tops them with crackly wasabi-infused tobiko roe. The sweetness of the cones and the heat of the wasabi roe reinvent the dish.

The chef, 36, grew up in Iselin in “a family of cooks” from Italy and what was then Yugoslavia. “We cooked and ate as a family,” he told me. “My favorite thing was to roll and stuff ravioli with my grandma from Naples. Other kids wanted to be firemen or basketball players. I wanted to be a chef.” After graduating from culinary school in Pittsburgh in 1999, Vukusich served as chef for a series of New Jersey country clubs and executive dining rooms. “Golfers and senior execs, they know good food,” he said.

That’s just what he delivers. I marveled at his crisp mahogany calamari, marinated two days in buttermilk for tenderness and showered with scallions, shaved peppers and crispy wonton chips. His tender, meaty Berkshire pork belly appetizer has most of its fat rendered out; the generous, 4-ounce portion is served on a bed of sticky rice fried to a lovely crunch like hash browns.

Peking duck tacos with orange hoisin sauce were delicious. As for the retro name, Vukusich said, “Peking duck was the festive dish you ordered when your parents took you to Chinatown. I think people are fine with eating the comfort foods they loved as kids. And it’s fun for a chef to add a new twist, like a Mexican tortilla instead of a Chinese pancake.”

Beef short rib forms the basis of two excellent entrées. Short rib ravioli (one of two pastas on the menu, which includes several gluten-free choices) is bathed in a mushroom cream sauce nutty with truffle oil. The tender short rib entrée is slow roasted, glazed with pungent Korean gochujang chili paste and crisped under the broiler.

Volcano seared tuna is a whopping bigeye fillet coated with a potent spice blend made for Just by the Spice and Tea Exchange of Red Bank. The tuna is seared “for five seconds on each side,” Vukusich said. The inside is sushi, and the garnishes—seaweed and swirls of avocado-sesame mayo—are worthy of a fine sushi bar.

The duck duet has eye and taste-bud appeal. Slices of pan-seared breast are paired with an amazing duck meatball wrapped in crunchy kataifi dough and topped with a sunny-side up quail egg.

Just’s desserts are lighthearted and populist. Hot, delicious cinnamon mini-doughnuts with vanilla icing were presented in a tiny red grocery cart, often posted on Instagram. S’mores crème brûlée sounded silly but proved a grown-up version of the campfire treat, lavished with toasted meringue better than any marshmallow. There are Oreo zeppoles and a Nutella waffle for two. Just’s menu seems to push every trendy button of recent years, but Vukusich’s playful tinkering gives them new life.

After dinner, customers often stop next door to stock up at the Emporium International Food store, which Maller co-owns. It’s a specialty market filled with imported delicacies. Its salads and cooked meats are made in Just’s kitchen each morning.