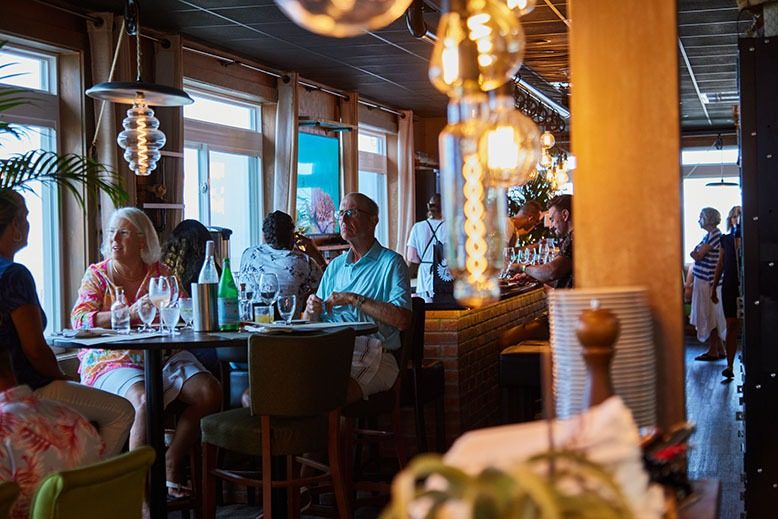 You wouldn’t expect to find a high-end steak house on the beach in Cape May. Nor would you likely know it’s next door to a century-old arcade. Since struggling with staff shortages after its 2021 opening, Primal has become one of the hottest tickets in town.

Primal’s décor is bold and modern, yet rustic, with a nod to Cape May’s seafaring past in its ship’s-galley design. The menu, dominated by steak and fish, is unabashedly protein-centric, and though prices top out on the high side, the polished vibe is casual.

“No stilettos and dresses required here,” says Mia Chiarella, co-owner and co-executive chef. “Just roll off the beach, shower, and come for dinner.” Co-owners and co-chefs Mia Chiarella and Joe Schulte opened Primal in Cape May in 2021. Photo by Felicia Perretti

Before you roll, know that reservations are required at this popular spot. It has an ample 99 seats, but accepts bookings no more than one week in advance. The exception is seating at its 20-seat BYO bar, which welcomes walk-ins.

On my visits, a smiling hostess warmly greeted our party. We arrived early the first time, so were invited to wait at the bar, where attentive staff uncorked our wine and brought us glasses. It was a short wait and a pleasant prelude, except that the 20 seats at the BYO bar were cramped.

The iron rack piled with oak and cherry firewood near the entrance fuels the hearth where Joe Schulte, Primal’s other co-owner and co-executive chef, grills all the meats and fish, imbuing them with seductive smokiness. Schulte designed the hearth himself. On both our visits, our servers were friendly and knowledgeable, pointing out guests’ favorite dishes and their own. They helped us pair our entrées with that night’s featured dipping sauces. Diners can choose any of seven to accompany their meat and fish mains. Chiarella prepares the sauces daily in a striking palette of colors and textures. They range from chimichurri to garlic peppercorn, horseradish cream, tomato agrodolce, romesco, chermoula and shallot cream. They nearly steal the show.

Last year, amid staff shortages, kitchen delays irked some customers, but the owners created a new position of expediter, a culinary traffic cop who coordinates the flow and timing of courses. Nick Olexa is that skillful orchestrator. A standout starter was the burrata, fragrant and truffle infused, served with blackberries, fresh figs, strawberry agrodolce and crostini. I could have made a meal of it. Another highlight was grilled calamari and octopus on a bed of chickpeas, olives and capers. Suffused with lemon vinaigrette, it was complex and tangy.

The pork belly was also a hit. Served over broccoli rabe with cannellini beans and long hot peppers in a garlic demiglace, the meat was moist and tender. Equally compelling was the fiery mélange of andouille sausage and mussels with garbanzo beans, grapes, olives and bulgogi. For $23, it needed more than 10 mussels and not so many olives. The sausage is now served with shrimp instead of mussels. Primal sources meats exclusively from the Wells Meat Company, a premium purveyor in Philadelphia. Chiarella, whose father and grandfather owned restaurants in Wildwood, works with the same Wells sales rep they did.

My favorite steak was the 8-ounce filet. Grilled medium well, as ordered, with just a hint of pink, it was tender yet beefy. The garlic-peppercorn dipping sauce, perky and peppery, complemented the meat well. Our server graciously let us try all six sauces, which was a special treat. Equally praiseworthy was the 22-ounce dry-aged rib eye, which I ordered medium-plus. It arrived very pink, barely medium. We notified our server, who whisked it away. Five minutes later, she placed before me another ribeye that hit the medium-plus bullseye. Chiarella makes a special rub for all Primal’s meats. Fragrant and enticing, it’s composed, we were told, of nine ingredients—only three of which Chiarella would name: the classic conspirators, salt, pepper and garlic powder.

Both the Chilean sea bass and bluefin tuna received high marks from our tablemates. The bass was moist, with a perfect light sear. The tuna, ordered seared, initially came just lightly browned. Within minutes, Chiarella appeared tableside and asked our guest how he would have preferred it. “Black and blue,” he said. In fifteen minutes, she brought out a replacement. Well seared, it was rare in the center. Our guest declared it the best tuna he’d ever eaten. Portions are generous, so you may be tempted to skip dessert. That would be a mistake here, partly because they are complimentary, but more so because they’re good. Chiarella switches them up nightly. Two such temptations we enjoyed in our visits: her chocolate brownie with espresso mousse and raspberry coulis, and her chocolate-covered strawberries. “It’s my way of thanking guests for coming into our house,” she says.

As a digestif, you might enjoy bowling a few frames of Skee-Ball at the arcade next door. Or if the weather’s nice, take a stroll on the moonlit beach.