Gnocchi with butternut squash, black trumpet mushrooms, crispy garlic and sage is on the menu at the Circle. Photo by Cayla Zahoran

Occupying a restored 1720 farmhouse on a two-lane country road in Sussex County, the Circle is surrounded by fields that spread out to distant hills. It’s an apt setting for a farm-to-table restaurant—which made NJM‘s 2021 list of 30 Best Restaurants—that grows some of its own produce on-site. But if the setting is placid, the food will raise your pulse. The sense of discovery kicks in with the amuse-bouche. The base is always a slice of fried fingerling potato. On one of our visits it was topped with…foie gras? Smoked oyster? Hauntingly good, it turned out to be a ginger-soy aioli with black sesame seeds.

As I neared the front door on each of my four visits, ebullient diners fairly danced their way out. “What’s great?” I asked. “Everything,” they invariably responded. I raised a skeptical eyebrow at first, but in the end, I can’t disagree. My first meal, the six-course chef’s tasting, set the bar high. By now, I’ve sampled 18 of the 19 menu items, and every dish has evinced meticulous technique in the service of flavor, texture, aroma and eye appeal. The hearth smiles back at you with candles. Photo by Cayla Zahoran

There’s always a seasonal soup. On my visits, deeply flavorful spring pea soup was lavished with crème fraiche and sassed with shallot vinaigrette. Velvety potato leek was crunchy with fingerling bits and snappy with pickled shallots.

Pastas, made daily in-house, are exemplary. Curvy cavatelli lolled in an invigorating pesto of shiitakes, asparagus and hazelnuts. Gnocchi, crisp outside and ethereal inside, reveled in brown butter, wilted ramps and toasted garlic. A scattering of  ’nduja sausage chunks imparted a lingering heat, gentled by dollops of fresh ricotta. Relatable, with a sense of surprise, seems to be the signature of the Circle’s young co-chefs and co-owners, Brendan Ullmann, 27, and Tyler O’Toole, 29. They met in 2017, working the fish station at Jean-Georges in Manhattan, the two-Michelin-star flagship of chef Jean-Georges Vongerichten. Ullmann grew up in Fredon, “rushing home from Little League,” he says, “to assistant-chef my mom, a fantastic Central Italian cook.” He earned a bachelor’s degree from the Culinary Institute of America, spending a semester at its Singapore campus in “a deep dive into numerous Asian cooking traditions.” Afterwards, he cooked at high-end Manhattan restaurants, including Lincoln Ristorante and A Voce.

O’Toole, raised in Garrison, in New York’s Hudson Valley, began working at 15 at the Tavern at Highlands Country Club, “a farm-to-table pioneer,” O’Toole says, “with our own farm, and local purveyors showing up daily with their morning harvest.” From chef Eric Gabrynowicz, O’Toole says he learned “fanatical attention to detail. Everything you don’t do exactly right impacts your diner’s experience. I decided I ultimately wanted to be a perfectionistic chef at a restaurant that I owned, and got a business degree from SUNY Oneonta.” Diploma in hand, he “jumped into nose-to-tail cooking” under chef April Bloomfield at the Breslin in Manhattan, known for its brawny, house-butchered meats.

At Jean-Georges, says Ullmann, “we both absorbed the first-class experience. The ultimate—the very best in ingredients, cooking, service, atmosphere.”

To that, O’Toole adds “utter integrity and pride in doing it right—everything from scratch, cutting no corners.”

Brendan was promoted to sous-chef. “On our breaks,” Ullmann recalls, “we’d cross Columbus Circle and sit with a coffee and go over everything we were making, and fantasize about what we’d cook someday in our own restaurant.” The Circle is named for that Manhattan crossroads “and how it inspired us.”

Almost everything is made from scratch. The delicious and highly varied breads are baked daily in partnership with Windy Brow Farms in Newton. Resist the temptation to fill up on bread, because there is so much to savor. Thai spices, coconut milk and related underpinnings (kaffir leaves, fenugreek) reintroduce you to salmon, crispy skinned and pan-seared, augmented with deep-fried garbanzo beans that could conquer the world if sold as snacks. Pan-roasted Cape May scallops sally forth with a lavish posse of sunchoke purée, onion, butter and cream. Duck breast gets its voltage from an ever-evolving spice rub that forms an irresistible, smoky crust. The flavors of one recent rub brought to mind the complexity of Oaxacan black mole sauce. Farro risotto, almost fluffy, is strewn with pomegranate seeds that provide contrasting sweetness and crunch. Short ribs emerge from a six-hour braise meltingly tender. Deboned, they are anointed with a bewitching sauce reduced from the braising liquid, into which go white wine, soy sauce, ginger, lemongrass, apples, crushed tomatoes, caramelized onion and garlic. At times, they are replaced with tender, pan-seared hanger steak basted with rosemary-thyme butter.

The steak for two, a 32-ounce, 38-day-dry-aged prime Black Angus rib eye ($115), is seared in a cast-iron skillet and finished in the oven. “Just before it’s done,” Ullmann says, “we add a huge knob of sweet butter, some crushed garlic, and fresh rosemary and thyme.” I was enthralled by the steak, but no less by the accompanying fries, thick and cooked to an eye-rolling crackle in rendered duck or beef fat (and available as a stand-alone side.) 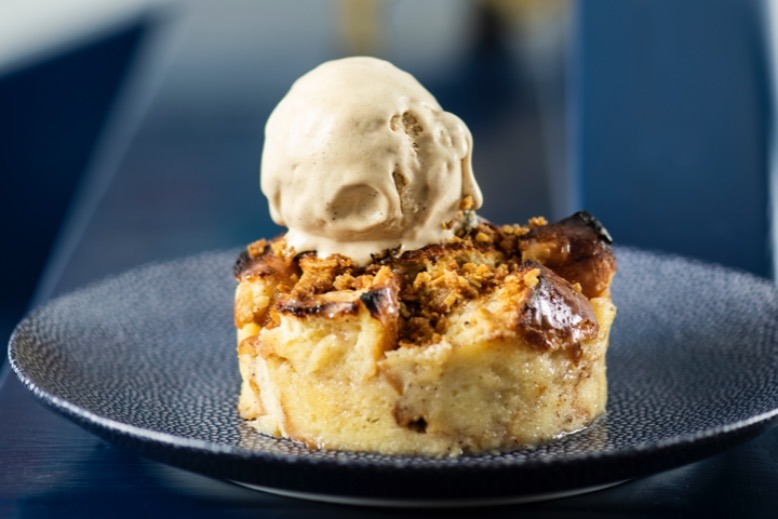 Ice cream and sorbet, made by O’Toole, are silky and intense. The seasonal fruit trifle was recently crested with layers of almond crumb and basil whipped cream. A slice of broodingly good Valrhona dark chocolate cake needed no help; but a scoop of O’Toole’s espresso ice cream, bolder in flavor than coffee ice cream, made for a kind of bugle call.