When does a kid become a goat? The farm animal needs a full year. The GOAT, David Burke’s restaurant in Union Beach, took nearly as long. When I first visited last July, the 3-month-old kid with the swaggering acronym had not yet established an identity.

A few months later, it had developed a sassy confidence and a neighborhood following. (And soon thereafter, made NJM’s list of favorite Italian restaurants.) The house bruschetta of the day set the tone: rosemary scented, teasingly salted, served with plush house-made ricotta and peppery house-cured beef bresaola. Other daily bruschetti have boasted house-made mozzarella and toppings like prosciutto, shrimp or crab. The GOAT’s  menu is big and varied so that “twice-a-week regulars never get déjà vu,” Burke says. Photo by Laura Moss

The palate-pleasing chopped salad—“really a chopped antipasto,” in Burke’s description—involves julienned salami, provolone, Parmesan, tomato, chickpeas, cucumber and olives. To round out the textures and flavors, Burke adds butternut squash and fresh fig, with garlic-rubbed avocado toast on the side.

Burke grew up half a mile away, in Hazlet. “I’d pedal past this building on my bike all the time,” he says. “First it was an Irish bar. The parking lot had more motorcycles than cars. Then it became Piero’s, which lasted 30 years, dishing out spaghetti for the kids and scallopine for the parents. And then it sat empty. I felt it was waiting to become the fun, modern trattoria that Route 36 was in need of.”

Burke himself designed the GOAT’s festive, block-pattern carpet (“a mod patchwork,” he calls it) and commissioned lighthearted paintings by Monmouth County artists of goats decked out in sunglasses and trim suits. Varied seating areas invite diners “to choose your own Italian dining style,” he says: beer and bites at the four-sided bar; pizza at private-feeling high-tops in view of the brick oven; family tables by the windows; or plush seats in the air-kissy, date-night front section. 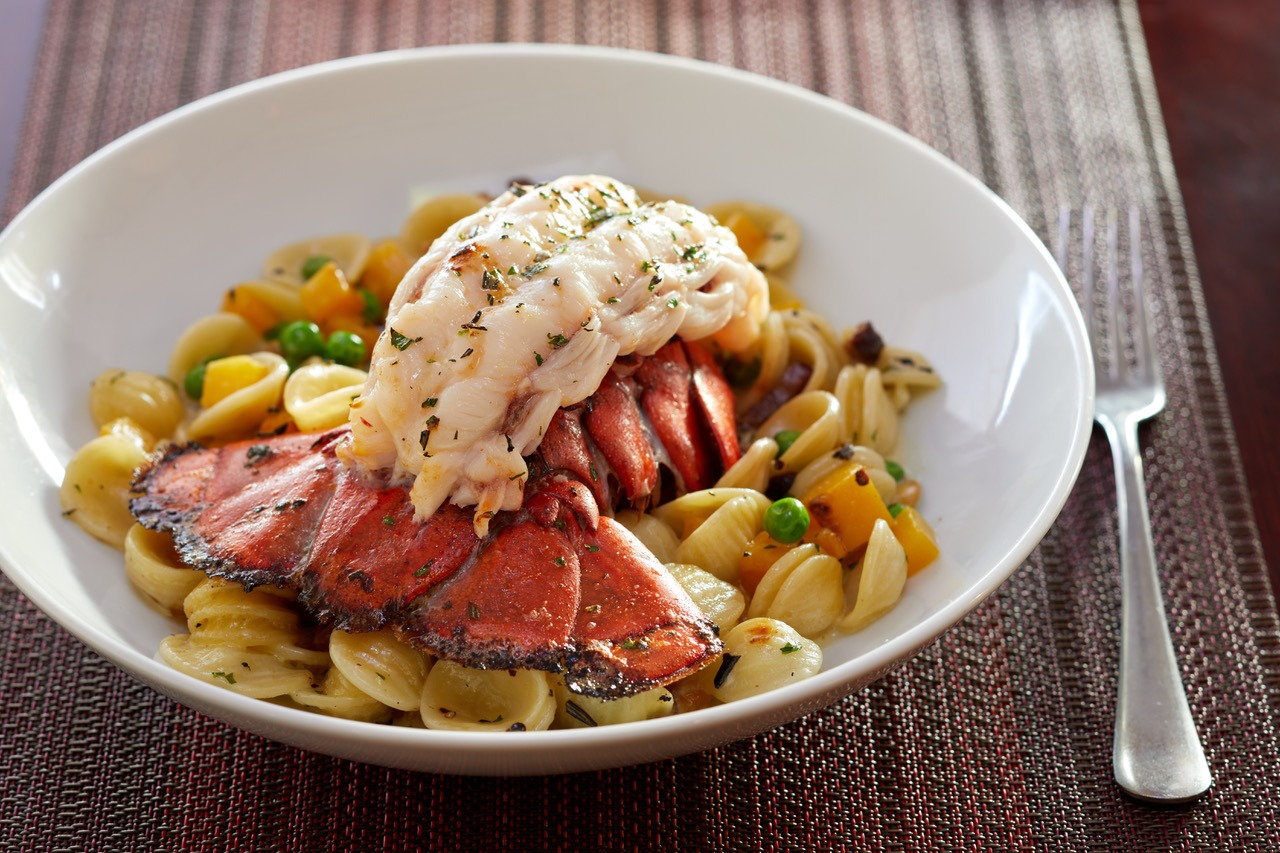 The GOAT’s half-dozen pastas are all worth trying. (I did.) Burke’s take on Rome’s iconic spaghetti carbonara is properly cheesy, eggy and bacon sassed, but with orecchiette (“little ears”) subbing for spaghetti, and a half-pound, shelled lobster tail lording over the dish, fit for the Roman sea god, Neptune. Flaming chicken harkens back to the days of Piero’s, which “made a show of flambéeing their penne alla vodka,” Burke relates. The GOAT’s brined and roasted all-natural half chicken emerges theatrically in Flintstone mode, its drumstick skyward. A server ignites the moat of Pernod jus. Flames leap for a riveting 30 seconds, crisping the skin and conferring a hint of smoke on the chicken and its accompanying tomato-Parmesan risotto. The GOAT’s à la carte sides are hard to resist. Brussels sprouts with bacon, apple and maple, anyone? But dessert awaits. Someone in your party should order the GOAT cake, which flaunts chocolate mousse over a brownie bottom with almond buttercream and a canopy of cajeta, goat-milk caramel. Another sure bet: chocolate-chip ice cream sliders lavished with marshmallow goo. A fun celebration of the restaurant’s name is perched atop the GOAT cake. Photo by Laura Moss

I asked Burke if he really thinks the GOAT is the greatest Italian restaurant of all time. “Maybe, but that’s not the meaning,” he replied. “I wanted the name to capture the local personality: smart, stubborn, naturally cool, always looking for something good to eat. Just like a goat.” Plus, he said, “I liked the way ‘meet me at the GOAT’ sounds.”

Plenty of folks are meeting at the GOAT. Its 110 seats are filled most nights with, says Burke, “people from along Route 36 and inland, and lots of Staten Islanders. Imagine,” he marvels. “They’re paying Verrazzano Bridge toll to eat Italian food here in Union Beach.”