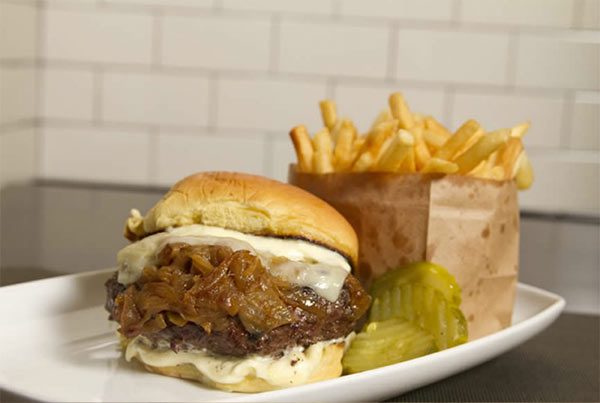 Company president Chip Grabowski and his wife, Cheryl, along with corporate chef Bruce Johnson, developed Urban Table’s  menu to attract a broad audience, including families and young adults. Chef de cuisine Patrick Aste, a Boonton native who has worked at other Harvest restaurants as well as at two Danny Meyer enterprises in New York (Blue Smoke and Eleven Madison Park), says Urban Table is “an easy and approachable concept that’s fun and casual.”

The expansive dining area has high ceilings and white tile walls with murals depicting subway scenes. Unfortunately, the hard surfaces contribute to a noise level not unlike rush hour.

The broad menu, a mosaic of comfort foods including barbecue, sushi, burgers and Southwestern, would pose a challenge for any kitchen. A good first impression was created by skirt-steak nachos.
Tender steak morsels replaced the typical ground beef. The crunchiness of the house-made chips held up under layers of well-seasoned black beans, a side of guacamole and melted cheese.

Salads we tried were generous and fresh. An excellent crab-cake salad came with crisp greens, artichoke hearts, pickled onions and orange segments, all nicely tied together by grain mustard and cider vinaigrette. A cowardly dressing on the Caesar salad, however, needed more garlic, lemon and anchovy.

We tried the orange Creamsicle shake, which is child friendly but also plays well with adults. Shakes on the Adult Entertainment section of the menu contain booze, like the Kahlua-laced Not Your Momma’s Cup of Coffee. We also tried a warm dessert, Monkey Bread, consisting of yeasty dough soaked in caramel syrup, layered with bananas and baked. Superb.