Courtesy of Anthropologie and Pier 1 Imports

Shop for bookends to decorate the shelves at stores like Anthropologie and Pier 1 Imports. For some wordplay, try the gold quotation marks from Anthropologie ($168), or the silver symbols from Pier 1 ($24.95). For animal-inspired decor, try the Victorian-style whale ($68) or the cat and birdcage game of hide and seek ($44.95). 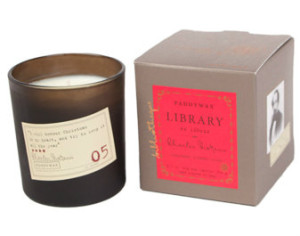 The Paddywax Library collection offers eight unique fragrances from popular authors with an accompanying quote. Pictured is the Charles Dickens candle, with a quote from A Christmas Carol: “I will honour Christmas in my heart, and try to keep it all the year.” Other featured authors are Leo Tolstoy, Oscar Wilde, Edgar Allan Poe, Jane Austen, Mark Twain, Ralph Waldo Emerson and John Steinbeck. $21 each Bring a library into unexpected rooms—from closets to bathrooms—with bookshelf wallpaper. This print is available from Anthropologie.com for $118 (one roll covers 60 square feet). The Ripper Gene by Michael Ransom

Michael Ransom, New Jersey resident and molecular pharmacologist with experience writing biomedical research, takes an expert stab at science fiction in the Ripper Gene. Ransom’s debut novel, released in August 2015, has been well-received by scientists and thriller readers alike with its impressive combination of real DNA science and a fast-paced hunt for a serial killer. Protagonist Lucas Madden, neuroscientist-turned-FBI profiler, discovers a genotype, the “ripper gene,” that predicts violence and psychosis—serial killer behavior. Madden must use his expert understanding of murderous minds to track down and find an active serial killer in the Mississippi Delta (the Snow White Killer) who has kidnapped his former fiance. The debut work by Tenafly resident, Cate Holahan, takes us to an elite boarding school where the students are expected to be the best, no exceptions. Nia Washington, a career ballerina with a possible profession-ending injury, is taking the year off to recuperate and teach the up-and-coming prima donnas on the dance fast track. On her first day touring the campus, Nia comes across the body of a teenage student washed up on the lake shore. Everyone is convinced the victim’s ex-boyfriend is the culprit, but Nia and the other RA, Peter, are not so sure. But if they’re right, that means there is a murderer still on the idyllic, isolated campus. Amy Stewart, a best-selling author with a long list of horticulture titles like Wicked Plants and Wicked Bugs, learned about the Kopp sisters of Wykoff while researching The Drunken Botanist. Back in 1914, silk-dyeing factory owner Henry Kaufman crashed into the Kopp sisters’ buggy and refused to pay for the repairs. Constance Kopp decided to take the law into her own hands after learning how to shoot from Bergen County sheriff Robert Heath; she went on to become deputy Bergen County sheriff, and the Kopp sisters started their own private-detective agency in the 1920s. Stewart weaves a fictionalized tale based on true events in her thrilling September 2015 release. A Knight of the Seven Kingdoms by George R. R. Martin

Bayonne-bred fantasy juggernaut and author of the A Song of Ice and Fire series released this collection of short stories in October 2015. The prequel tales—beginning approximately 89 years before the events chronicled in A Game of Thrones—follow Dunk, a hedge knight; and Egg, Dunk’s mysterious young squire, on their adventures through Westeros during the reign of two Targaryen kings. The collection is perfect for any ASOIAF fanatics who are eagerly awaiting the release of The Winds of Winter. According to a report by the CDC, the heroin overdose death rate in New Jersey is more than triple the nationwide rate, and surpasses homicide, suicide, car accidents and AIDS as a cause of death in the state. In Sam Quinones provocative best-selling April 2015 work, he traces far-flung variables, from the marketing push for OxyContin in the 1990s and lax pain killer prescription policies, to the economy of a small county in western Mexico, to illustrate how America got hooked on opiates. Sinatra: The Chairman by James Kaplan

Celebrate 100 years of Frank Sinatra with The Chairman, an October 2015 release nominated for the prestigious Kirkus Award for nonfiction (an honor ultimately awarded to Between the World and Me: Notes on the First 150 Years in America by Ta-Nehisi Coates). Be sure to take our Sinatra quiz and pick your favorite tune in the Sinatra Song Showdown! This October 2015 release from Rutgers University Press is an excellent companion for any lover of American literature. Shelley Fisher Fishkin, who holds a Ph.D. in American Studies from Yale University and is a former president of the American Studies Association, takes readers on a tour de force of the locales that inspired and enabled the works of great American authors. There’s Mark Twain’s Midwest hometown, and New Bedford, Massachusetts, where an acceptance of fugitive slaves allowed Frederick Douglass to craft his voice, and the nearby whaling ports of Nantucket that inspired Herman Melville.

A Book of the Month Membership