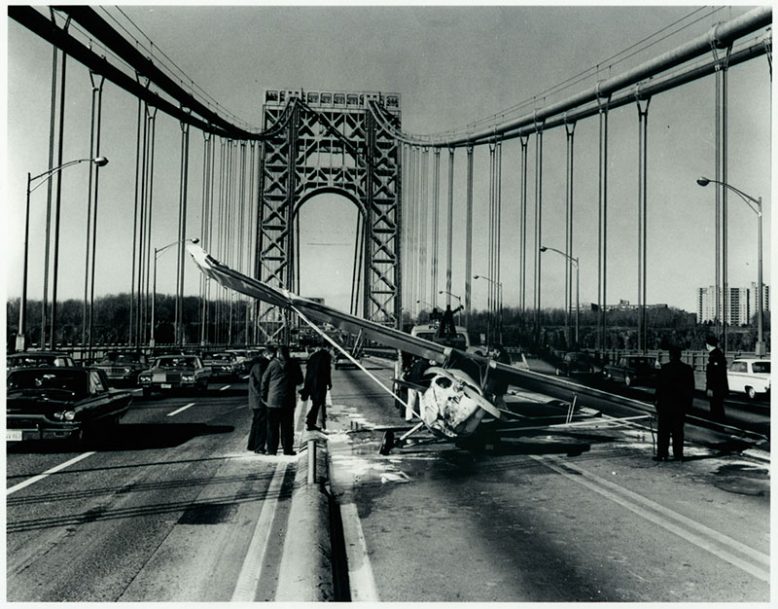 Photo courtesy of the Port Authority.

Despite its beauty and grandeur, the George Washington Bridge is occasionally the scene of tragedy. In 2005 two workers fell to their deaths—one in the process of removing scaffolding from a repainting project on the bridge towers, the other from a catwalk inside the New York anchorage.

Motorists have also died in accidents on the bridge. Serious accidents on the bridge have often involved tractor trailers. One tractor trailer went out of control, with its cab ending up extended beyond the walkway on its side and over the water, the passenger side door flung open. The driver, his leg broken, tied himself to the steering wheel to avoid falling out. For fear the truck might break free and descend to the Hudson, no attempt was made to extricate it until the driver had been removed. The only way to get to him was by breaking through the rear window of the cab.

When accidents involve motorists and a crime has been committed—such as car theft or drunk driving—or there are serious injuries or a fatality, part of the bridge will be shut down. Usually in major accident situations traffic is diverted to the other level, but there will still be difficulty accessing the accident site: behind it all lanes will often be filled with bumper-to-bumper traffic and, with no shoulder, it will be impossible for emergency vehicles to advance. The trick for the Port Authority, whose equipment is kept behind its Fort Lee offices (in peak traffic hours a wrecker is positioned on the New York side as well), is to get patrol cars, ambulances, tow trucks, and sometimes fire engines to approach from in front of the accident site, where the bridge will likely be entirely clear.

The eastbound lanes of the Upper Level once had to be temporarily closed when a truck turned over and spilled a load of watermelons. Another time it was 14,000 pounds of frozen chicken parts. Another time it was Bolivian beer. Another time it was goats spilling out of a truck and running across the bridge. Yet another time it was a cargo of horse manure; while bridge employees frantically shoveled, motorists, who were detained behind the accident anyway, helped themselves to quantities of free fertilizer for their gardens.

Cars that break down or are abandoned on the bridge, of course, have to be towed off. Sometimes an abandoned car suggests a suicide, but on other occasions there is no ready explanation. Eventually, it is
discovered that someone, apparently disgusted with a car’s performance, simply walked away from it on, of all places, the George Washington Bridge

A vehicle fire or hazardous material spill is a particularly difficult situation for bridge management. In 1980, for the first time in the almost half century since the bridge opened, both levels were entirely closed when a leaking valve on a tanker carrying 9,000 gallons of propane gas generated fears of an explosion and fire engulfing a large portion of the bridge. Luckily, someone on the bridge maintenance staff found a cork with which he was able to temporarily plug the leak.

The most famous accident on the George Washington took place on Christmas Day 1965, when a plane crash-landed on the Upper Level. A 19-year-old pilot from the Bronx, Philip Ippolito, was out for a
pleasure ride with a friend in a small plane he had rented at the Ramapo Valley Airport in Spring Valley, New York. They flew down the Hudson, developing what they thought was engine trouble just off midtown
Manhattan.

Ippolito turned the plane around, thinking he might be able to make it back to the airport. But the engine was now sputtering. Earlier, in flying over the George Washington Bridge, Ippolito had noticed that traffic was light, as it usually is on a Sunday. With his engine now close to failing altogether, he glided toward the bridge and managed a long sweeping curve over the lowest point of the south barrel cables. The plane, with a 34-foot wingspan, set down between widely spaced westbound cars and trucks.

The plane’s wing clipped a truck, causing almost no damage to it, but the plane was pretty well demolished when it spun out of control and then smacked into the concrete divider. There was no fire because the plane’s problem, as it turned out, was that it was out of fuel; its gas cap was missing. Ippolito and his passenger were able to disembark without assistance and were taken to the hospital. Ippolito had bruises over much of his body; Brennan had a deep cut in his chin, which required a dozen stitches, and lost a front tooth. Both men were released from the hospital two days later.

Had Port Authority patrolman Michael Teel been on duty that day, he might have been involved in documenting Ippolito’s adventure. Teel—the father of Rutgers University quarterback Mike Teel—is responsible for investigating accidents at Port Authority facilities.

At 3 a.m. on September 11, 2001, Teel was investigating an accident on the George Washington Bridge involving two tractor trailers westbound on the Upper Level. One of the drivers had a severed leg and had to be immediately evacuated. By 5 a.m. the trucks had been removed to an impoundment yard in Ridgefield Park, New Jersey, where Teel continued his work, assessing the damage to the two trucks. He was still there, preparing to go home to catch some rest, when the first plane hit the World Trade Center.

Teel drove to GWB headquarters in Fort Lee. When several New Jersey fire trucks arrived, he escorted them across the bridge and down to the World Trade Center site. Teel would remain there, digging, for the better part of the next 48 hours. The Port Authority built and managed the World Trade Center and occupied nineteen floors in Tower I, where 2,000 of their 7,000 employees had their offices.

Steve Napolitano, now assistant director of the Tunnels, Bridges, and Terminals Division of the Port Authority, was general manager of the George on 9/11. Napolitano grew up in Fort Lee, New Jersey, so when he got the job as manager of the bridge "it was like going home." On 9/11, Napolitano faced a situation without precedent. "When the planes hit I didn’t know what to do. I had no guidance from headquarters because there was no headquarters; it had been in the World Trade Center. I couldn’t very well call the person in the position I’m in now for advice. I’m getting my information from television, and I’m wondering whether they’re going to hit the GWB next. We cleared off all traffic already on the bridge heading east, though we let traffic coming out of the city run for a while. Traffic heading toward the bridge in New Jersey had to be turned around. Then we locked down the bridge, closing all lanes on both levels except for emergency vehicles—police, firemen, E.M.S.

"Everyone wanted to go down to the World Trade Center but, except for a few patrolmen who were dispatched down there…we had to stay at the bridge. We were constantly opening a couple of lanes to get
emergency personnel through and then buttoning them up again. We were a staging area for men and materials going to the WTC. Nobody left the GWB Administration Building to go home for three days."

The George Washington slowly returned to a relatively normal state over the next few days, with discussions already under way on ways to radically increase the number of cameras trained on the bridge and to reinforce certain areas that could easily be damaged by a bomb blast.

One measure immediately instituted and still in effect confined the 30,000 to 40,000 large commercial vehicles using the bridge each day to the Upper Level. "This is because of the tunnel effect," Napolitano says. "If a terrorist truck blew up on the Upper Deck, most of the force of the explosion would dissipate into
the air. But if it blew up between decks, the concentrated explosion would do much more damage."

A security concern long predating 9/11 is suicide prevention. The GWB averages slightly more than one
"successful" suicide a month and several attempts. When I mention these figures, people are startled. "How come we never hear about these suicides?" they ask. They don’t because the Port Authority has a  conscious policy of keeping silent about suicides as best it can so as not to inspire copycat "jumpers," as bridge officials call them.

Only two people have survived jumps from the George Washington Bridge  One was a man who drove onto the bridge with his mother, stopped the car, and leaped over the railing. Though he broke his back, he managed to make it to shore. The other was a woman who, pulled from the water, was discovered to have broken virtually every bone in her body. She spent a year in the hospital being slowly knit back together. Released, she immediately made her way back to the George Washington and jumped again. This time she was "successful."

There was hardly a present or past GWB staff person I interviewed who didn’t have his or her own tale of witnessing a suicide or participating in averting one. While Ken Philmus was general manager, a man
threatening to jump said he would reconsider if he were delivered into the care of a doctor. Philmus, who had gone out onto the bridge with other staff trying to avert a tragedy, happened to have a white shirt and tie on. He played the doctor role, and a life was saved.

Shock jock Howard Stern had a young Bronx man call into his radio show on a cell phone from midspan on the north walkway of the GWB at 8:10 the morning of December 7, 1994. Stern found him "so annoying
. . . I was going to tell him to jump." Then Stern realized that was exactly what the man had in mind. Motorists driving west who were listening to Stern’s program stopped their cars on the bridge and tried to talk the man out of jumping. A few borrowed his phone to chat with Stern.

Luckily, a Port Authority policeman back at bridge headquarters in Fort Lee was listening to the radio and immediately set forth for the spot with several colleagues. At one point the man’s connection failed, and Stern said, "I guess he jumped." But the man came back on in a moment, saying, "My battery is running low and so am I." By this time the police had arrived and successfully took the man into custody. They used his phone to tell Stern that all was well and that they were big fans of his.

If you missed any previous installments of The Geroge Washington Bridge: Poetry in Steel, click on the links below to read them:

Part One: Knocking on Heaven’s Door.

Part Two: A Day on the George.