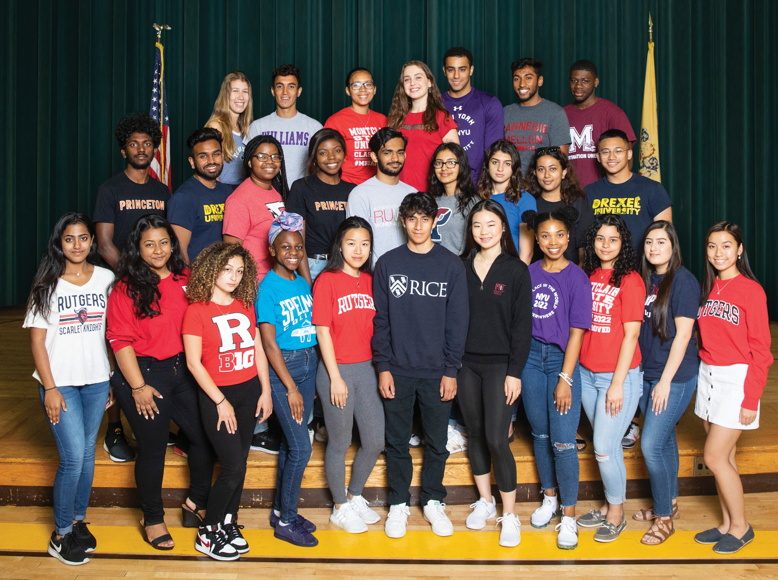 When seniors at Jersey City’s Dr. Ronald E. McNair Academic High School lined up for graduation practice in June, they followed the school tradition of wearing T-shirts from their future colleges.

The lineup—including Harvard, Princeton, Columbia and Carnegie Mellon—would be impressive at any high school, public or private. But it was especially notable at McNair, a magnet public school where many of the students will be the first in their families to attend college, and half qualify for free or reduced-cost lunch.

Despite these obstacles, McNair students rack up some of the best SAT and AP test results in New Jersey. Their performance propelled the school to the top spot in this year’s New Jersey Monthly Top High Schools rankings. The school last topped the chart in 2006.

Helping bright kids like those at McNair reach their potential, whatever their economic or ethnic backgrounds, doesn’t just affect those students; it also has implications for the nation’s future, education experts say.

“To have access to places like McNair is really important for students from traditionally disadvantaged backgrounds,” says Adam Tyner, associate director of research at the Thomas B. Fordham Institute, an education think tank in Washington, D.C. Graduates of elite high schools, he adds, “become the leaders and innovators and job creators in the next generation.”

At a time when America’s population is becoming more diverse, the nation needs to develop talented students “regardless of their skin color, family income or zip code,” says Jonathan Plucker, an education analyst at Johns Hopkins University in Baltimore.

Students say the school opens many doors for them, and not just academically.

“Before McNair, I was definitely more hesitant to try new things. Even if I wanted to do something, I scared myself out of it,” says Natalie Cisneros, 17. “McNair has shown me I am capable of more than I tell myself I am.” Cisneros, a senior, has signed up for five AP classes this fall. Her parents, immigrants from Ecuador, did not attend college.

The recipe for success at McNair starts with brainy, motivated students. The school, in downtown Jersey City, admits about 25 percent of the students who apply—a rate that matches some of the most selective colleges in the nation. The school enrolls about 185 freshmen a year, basing admissions on the PSAT, along with teacher recommendations and middle school grades. Admissions are gender blind, which has led to a mix that’s 58 percent female and 42 percent male.

“The students are very resilient, open and curious people,” says English teacher Holly Smith, a 1995 McNair graduate and Jersey City’s 2016 Teacher of the Year. “I have high expectations that they are going to embrace even the most rigorous material.” In her class, that might mean digging into metaphysical poets like John Donne.

One day in June, as the school year wound down inside the school’s decade-old, red-brick building, science students talked by Skype with a Harvard biologist who described his research into the evolution of lizards. Observing these reptiles in the field, he warned would-be researchers, isn’t glamorous work: “Lizards spend most of their time doing nothing.”

In the auditorium, AP calculus students presented their musical, Harry Potter and the Curse of Calculus, for those who believed the only thing lacking in the story of a boy wizard was a big dose of math. “Got derivatives on my mind, I can never get enough,” ran one lyric.

The school has taken steps to increase AP participation in recent years, according to McNair principal Kate McCabe. For example, AP American history was previously open to only the top 80 students in the freshman class; now all freshmen are eligible. Similarly, chemistry is now open to all freshmen, which allows them to take more AP science classes later.

McNair’s AP results are impressive. Fully 100 percent of students received at least one score of 3 or better on an AP test for the 2016-17 school year—by far the best in the state. That’s a big jump from the 2016 rankings, when 73.1 percent of AP tests resulted in a 3 or more at McNair.

McNair students have also increased their participation in the visual and performing arts, with 66 percent taking at least one art class, up from 41.8 percent in 2016. All of these increases help explain McNair’s jump from number 65 on the 2016 high school rankings to number 1 this year.

Of course, McNair can be a challenging environment, so the school recently added a counselor to help students with personal, as well as academic, issues.

“Our kids are naturally talented, and that has gotten them very far,” says Jose Avegno, a former language arts teacher and a 1999 McNair graduate, who was named crisis intervention counselor last October. “When they encounter obstacles, that equates to failure for them. It starts to eat away at their perception of who they are: I am not a kid who gets Bs. We help them understand there are supports and strategies you can employ to help you become a better student.” Often, it’s as simple as asking for help from a teacher or a student tutor, or finding better ways to manage time and paperwork.

“Taking AP history as a freshman showed me that I really have to get my stuff together if I’m going to succeed at this school,” he says.

Victoria Johnston, a 17-year-old senior, says that McNair introduced her to other minority girls interested in the traditionally male-dominated field of technology.

“It was nice to have a group of people I could talk to and relate to,” says Johnston, whose background is Nigerian and African-American. She hopes to major in computer science in college.

Students and teachers say they value the diversity of McNair. (The school is named in memory of Ronald McNair, an African-American physicist and astronaut who perished in the 1986 Challenger space shuttle explosion.) Asian students make up almost 46 percent of the student body, while whites, African-Americans and Hispanics each account for about 17 percent to 18 percent of the population. For almost half the students, English is spoken at home, but substantial minorities speak Spanish, Arabic or Tagalog (the first language of many Filipinos) around the kitchen table.

The diversity is not just ethnic. The school is also economically mixed, with the children of blue-collar workers sitting next to the children of Wall Streeters. That diversity “brings a realness to the classroom, a richness to the environment,” says chemistry teacher Jeremy Stanton, another McNair graduate.

Student Anna Prilutsky, 16, a junior who is the daughter of Russian immigrants, says she appreciates getting to know classmates from different backgrounds. “Once you’ve been here for a couple of years, you become more aware of the difficulties other people face,” she says.

But McCabe, the principal, says the staff is okay with that.

“It’s easy to work hard on their behalf,” she says, “because they’re spectacular.”