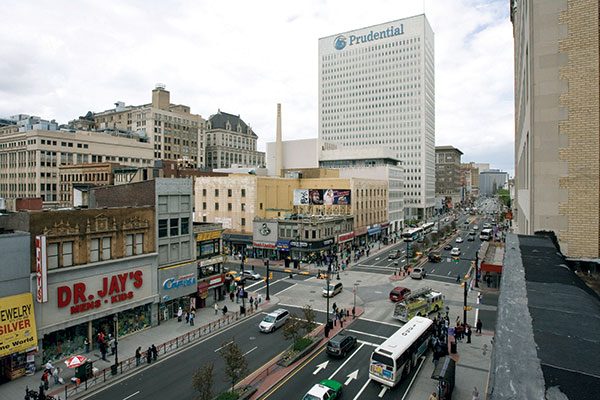 Market and Broad streets in Newark are at the center of one of the state's 37 Urban Enterprise Zones. UEZ supporters fear a lack of funding will doom the program.

Among the potential victims of the current fiscal crisis are the state’s Urban Enterprise Zones, which at deadline were poised to lose all their $91.7 million in state funding under Governor Chris Christie’s proposed budget.

The UEZ program was created in 1983 under the administration of Christie’s fellow Republican, Governor Tom Kean. Since then, UEZs have provided significant tax breaks to businesses and consumers in struggling urban centers in an effort to promote economic development, job creation, and downtown retail activity. Currently, 37 municipalities—including East Orange, Irvington, Elizabeth, and Trenton—participate in the program, and more than 2,000 projects have been approved under the UEZ umbrella. In the UEZs, the sales tax on retail purchases is reduced by 50 percent, and businesses are encouraged to hire full-time employees through a $1,500 tax credit.

Frankly, we’re not talking about business going through the roof in UEZs. The program has not created bustling retail districts, but it has breathed some life into urban downtowns.

“The Urban Enterprise Zones are essential because they provide a vehicle to attract businesses to your community,” says Irvington mayor Wayne Smith. “People make decisions to move into a city, which offer jobs to residents, based on the UEZ criteria. Cities are where we have the transportation hubs, and if we are committed to the UEZs, these cities can continue to thrive.”

When the UEZ funding cut was announced in April, some in the affected cities reacted as might be expected, saying the end of state funding doomed the program. But Christie rejected the notion. In fact, the state is not eliminating the tax breaks and other incentives; it is cutting the funding that largely covers administration of the program and new investments. The administration has said it is open to other means of covering such costs.

During a recent meeting with urban mayors, Christie made it clear that, while he supports UEZs, state money is just not there to fund the program this fiscal year. He challenged the legislature to come up with an alternative source of funding—simply put, taking the money from someplace else. He told the mayors that he believes New Jersey should invest in its cities and implied that he would like to fund UEZs in the next budget cycle.

It’s hard for Christie or any other elected official to oppose UEZs. How can you be against investing in urban centers, particularly when suburban sprawl is out of control? So, like most budget matters, it is a question of priorities. As New Jersey Monthly went to press and the legislature neared a vote on the budget (due by June 30), the Democrat-controlled legislature was still hoping to reinstitute the so-called millionaire’s tax, despite Christie’s veto. But the legislature would dedicate much of the revenue from that tax to senior citizen rebates—even if those seniors are financially comfortable. Why not dedicate a portion of those dollars to funding UEZs?

UEZs should be a top priority when it comes to allocating scarce state resources. Instead of giving a break to seniors who earn more than $150,000 a year, put the money into tax breaks for struggling business owners in Newark or Irvington or Trenton. They could use it a hell of a lot more. It is a smarter investment. If the downtowns in our urban centers die, it’s bad for all of us.