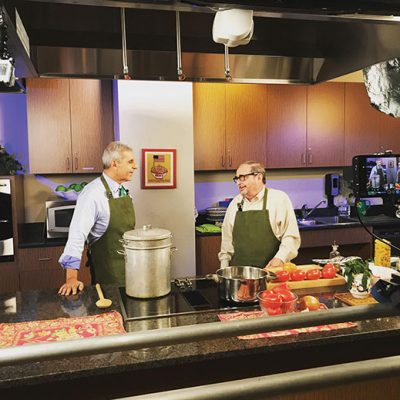 Journalist Nick Acocella was hooked on pasta at an early age, as a black-and-white photo of Acocella as a toddler covered with pastina attests.

Another interest, politics, came later. Acocella, now 75, remembers listening with fascination to the U.S. Senate Subcommittee on Investigations’ Army-McCarthy hearings as an 11-year-old in his family’s West New York kitchen.

In 1970, Acocella began writing about a third passion—baseball. In time, New Jersey politics entered the mix. “Why baseball and New Jersey politics?” he asks aloud. “The only answer I can give is that they are the two best spectator sports I know.”

Today, Acocella, a Hoboken resident, is one of the state’s most respected political observers. His weekly newsletter, Politifax, has been a must read for 20 years for those who wish to keep abreast of the nuances of Jersey politics.

“Nick gets it, and everybody knows it,” says Michael Aron, chief political correspondent for NJTV and a former New Jersey Monthly editor.

In 2015, Acocella decided to try his hand at television. His half-hour show on NJTV, Pasta and Politics, combines three of Acocella’s passions. He cooks, he eats and he talks politics, one guest at a time.

Acocella has shared his on-air kitchen (often outfitted with his mother’s blender) with the likes of Senator Cory Booker (a vegan with whom Acocella prepared a meal of orecchiette with Jersey tomatoes, onions and spinach) and former governor Tom Kean (spaghettini with sauteed scallops). As he does with Politifax, Acocella brings wit, intelligence, insight and institutional memory to the table.

The concept works. It appears there’s something about chopping peppers and breaking bread that relaxes his guests—and encourages candor. “He treats politicians like human beings,” Lesniak says of Acocella.

“It’s not a gotcha show,” says Acocella, “but the format evokes some very interesting and revealing responses.”