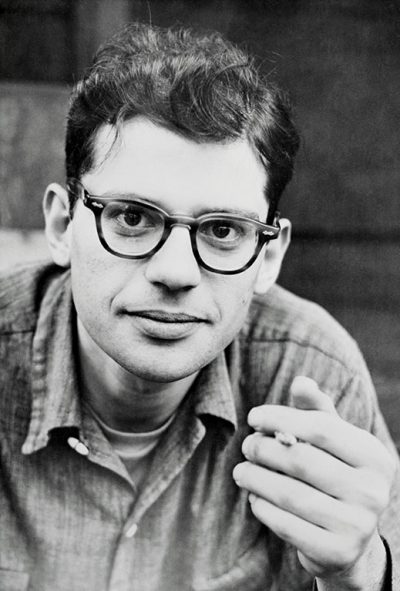 When Allen Ginsberg came home to Paterson in 1966 to read his poems at the YMHA with his father, Louis, a revered English teacher at Central High School and a poet himself, he made a comment that would not have raised eyebrows in his usual Bohemian circles. But Paterson was far from Bohemian. Ginsberg said that he had just smoked pot at the Great Falls. Mayor Frank X. Graves Jr. instructed the police to issue a warrant for Ginsberg’s arrest.

Ginsberg was not arrested, but for years he remained reluctant to make public appearances in Paterson. He finally came back in 1980, when Gillan invited him to an event sponsored by the Paterson Public Library (where Ginsberg’s stepmother was a board member) and the Poetry Center at Passaic County Community College, which Gillan founded and still runs. “It was a miracle that I was able to get him to come, because he was really annoyed at Paterson.”

Ginsberg, who died in 1997, at age 70, would have turned 90 on June 3, and his home state still isn’t quite sure what to make of him. His hero, Walt Whitman, a longtime Camden resident, and his mentor, William Carlos Williams of Rutherford, are both in the New Jersey Hall of Fame, but Ginsberg is not. He was one of 30 nominees presented to voters for the class of 2011, but his name was withdrawn after officials learned of his longtime membership in the North American Man/Boy Love Association.

“He never withdrew his membership from that group, so we felt that this was not the kind of person that we wanted in the Hall of Fame,” says Don Jay Smith, one of the founders of the hall and its executive director until 2012. “We took him off the list and we never put him back on.”

His absence from the hall doesn’t surprise Eliot Katz, a New Jersey poet and the author of the recently published The Poetry and Politics of Allen Ginsberg (Beatdom Books). “I think Allen appreciated when he was appreciated by the mainstream literary world,” says Katz, who was a Rutgers sophomore when he first heard Ginsberg read, and who later read his own poems at Ginsberg readings. Katz will be discussing his new book at Beat and Beyond: Gathering, a literary festival from June 3 through 8 in Manhattan that will mark Ginsberg’s birthday. “But he was also writing poems that were very political and calling for radical social change, and when you’re publishing poems that are calling for radical change, it’s difficult to expect the existing social institutions to honor you.” Katz predicts that New Jersey will choose to honor Ginsberg at a later date—perhaps 50 years from now.

Kevin Coyne is a freelance writer and teacher at the Columbia University Graduate School of Journalism.