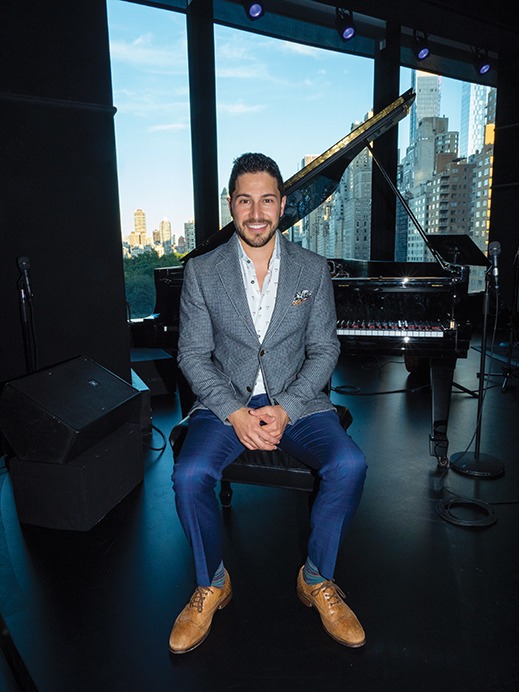 Emmet Cohen relaxes prior to a recent gig at Dizzy’s Club in New York.
Photo by Marla Cohen

As the last hints of daylight stream through the panoramic window behind the stage at Dizzy’s Club in Manhattan, jazz phenom Emmet Cohen calmly takes his seat at the grand piano. After his trio is introduced, Cohen launches into the 1937 classic, “That Old Feeling.” As always, his playing is confident, dynamic and lyrical, a blend of extraordinary technique and good taste.

The 29-year-old Cohen, who spent much of his childhood in Montclair, has risen quickly to prominence as one of the most admired young pianists in the jazz world. After earning a master’s degree from the Manhattan School of Music, which he attended on a full merit scholarship, he began a rigorous schedule of touring and recording. He already has six albums to his credit and numerous significant honors. The latest accolade: this year’s prestigious American Pianists Association Cole Porter Fellowship.

Many jazz musicians focus on one subgenre, such as trad jazz, free jazz or bebop. Cohen’s playing incorporates elements from multiple styles and eras. “Part of my concept is to try to bring together the different styles and the different ways of playing jazz,” Cohen says. “I love playing stride piano. I love playing classical piano. I love bebop, and I love cool jazz, the term that the critics would use to describe Miles Davis. I love to spend time around jazz masters and musicians who have had different experiences to mine. I feel like that’s a great way to feed your own artistry.” Coleman will also be featured on a future installment of the Masters Legacy Series, a recording project designed to bridge the generation gap through interactions among jazz veterans and serious young jazz musicians. Cohen conceived of and is producing the project; he also plays on each album. The first in the series spotlights drummer Jimmy Cobb; volume two pairs Cohen with bass legend Ron Carter.

In addition to his own artistry, Cohen’s reverence for the history and traditions of jazz has earned him respect from the A-list musicians with whom he interacts.

“Emmet is obviously an extremely talented musician, but he’s also passionate about learning directly from the legends of this music like Ron Carter, Benny Golson and Albert ‘Tootie’ Heath,” says superstar jazz bassist and Montclair resident Christian McBride. “Quite often, many musicians of his generation judge their acceptance by Instagram likes and followers. Emmet cares about what the legends think.”

Billy Hart, a celebrated drummer and educator who has played with Miles Davis, Wes Montgomery and Herbie Hancock, offers a similar assessment. “He’s got almost flawless facility on the instrument. He’s got a lot of historical depth to his playing. He has a very clear understanding of the tradition of this American music.”

Cohen’s musical aptitude was evident early on. His father, George, remembers putting a classical record on the stereo at home. The 2-year-old Emmet pointed to the speaker and said “Pachelbel,” correctly identifying the composer.

Sensing their son’s potential, Cohen’s parents enrolled him at age 3 in a Suzuki piano program, in which the students are taught by ear before being introduced to written music. “It lends itself to playing jazz,” says Cohen, “because of the way jazz is so based around oral tradition and hearing—and then imitating and playing.”

It wasn’t until his family moved from Florida to Montclair when he was 11 that Cohen, already a child prodigy on piano, started developing an interest in jazz. The town’s vibrant arts scene, driven in part by the many jazz musicians who live in the area, exposed him to influences that would help shape his musical career. In time, he would also learn to compose and to play the Hammond B3 organ.

Cohen’s first taste of jazz education was a Montclair-based workshop called Jazz Connections, led by a musician and educator named Janet Lemansky. Jazz Connections morphed into Jazz House Kids, which today is a respected educational program run by president and founder Melissa Walker, herself a jazz vocalist, and McBride, her husband, who serves as artistic chair.

“There were all these world-class musicians teaching at the summer workshop,” Cohen recalls. It was there he learned from musicians like Mike Lee, Dave Stryker, Radam Schwartz, Michelle Rosewoman and Billy Hart. In Montclair, Cohen’s family lived within walking distance of Trumpets Jazz Club. “I would go there and sit in with various people and have these opportunities and play in the jam sessions,” he says.

Cohen later started venturing to the weekly jazz jam at Cecil’s, the erstwhile club in West Orange run by jazz drummer Cecil Brooks III. “I learned B3 at Cecil’s. Cecil would also let me come to the club in the daytime to practice organ and to try to figure out the instrument. They were really kind to me. They sensed my seriousness about learning the music and welcomed me into their family.”

As a young teen, Cohen got to know McBride through Jazz House Kids. “He would sit down at the piano, and he’d show me a little something on it,” Cohen recalls, “and then pick up the bass and play a song with us. It meant the world to us.”

Little did Cohen know that, years later, he’d be part of one of McBride’s ensembles. “It was always a dream of mine to play with him, and a couple of years ago, I joined his band called Tip City,” Cohen says. “It has a special instrumentation—piano, bass and guitar—which is, like, the chamber music of jazz.”

Hart, the drummer and educator, was another of Cohen’s Montclair mentors. “When I was in high school, he would call me up on a Saturday morning and say, ‘Hey, how soon can you be here?’, Cohen says. “I’d go over there and help him with his computer or whatever he needed help with. And then we’d sit and we’d watch Ahmad Jamal videos, and he’d lead me to practice some music or show me original music he was going to play in Italy the following  week.”

These days, it’s Cohen who provides inspiration for the younger set. “Whenever I’m in front of students,” he says, “they ask, ‘How and why did you decide to be a jazz musician?’ And I say, ‘Well, it’s like Harry Potter choosing his wand. He doesn’t choose the wand; the wand chooses him.’”

Cohen travels the world, playing more than 200 dates a year in addition to composing, recording, producing and teaching. His next appearance in the area will be December 15 at Dizzy’s Club, with vocalist Mary Stallings.

“She’s one of the most incredible living vocalists, on a par with Carmen McRae, Dinah Washington and Billie Holiday,” Cohen says. Then he adds, as if referencing his own aptitude, “She’s attuned to the history of music in a certain way, and the blues, swing, soul, gospel culture and just all things jazz.”