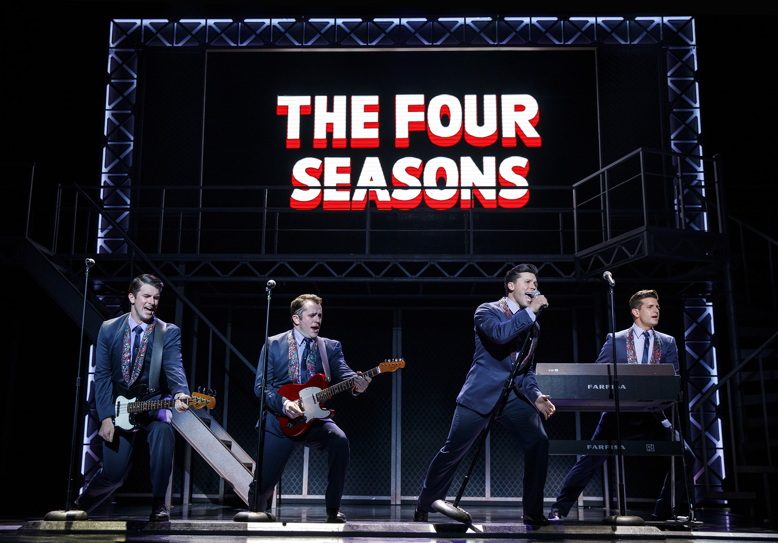 Jersey Boys, the musical about Frankie Valli and the Four Seasons, is working its way back to the Garden State for the three-night Jersey premiere.

It’s not too good to be true! After 11 years on Broadway and touring more than a dozen countries, the jukebox musical is coming home for a five-show stint, from October 13-15, at the State Theatre New Jersey in New Brunswick. Tickets cost $35-$138.

The winner of the 2006 Tony for Best Musical and the 2006 Grammy for Best Musical Show Album, Jersey Boys features the group’s hit songs “Sherry,” “Big Girls Don’t Cry,” “Rag Doll,” “Oh What a Night” and “Can’t Take My Eyes Off You.”

“It might as well be called ‘American Boys,’” said Elice in an interview with Bert Baron for State Theatre’s All Access podcast. “It’s the story of people pulling themselves up by the boot straps and making something of their lives, which is really the American dream.”

The documentary-style musical opened on Broadway at August Wilson Theatre in New York City in 2005 and took its last bow in January 2017. It’s headed off-Broadway in November.

Originally, when Frankie Valli and Bob Gaudio spoke to Elice and Brickman in the early 2000s, they wanted to create a Mamma Mia-style musical with an independent story set to the band’s hits. Instead, the script writers, who also co-wrote The Addams Family, realized the behind-the-music story of the Four Seasons—Frankie Valli, Bob Gaudio, Tommy Devito and Nick Massi—should be the focus.

“It’s a remarkably good script,” says Jersey Boys production supervisor Richard Hester. “It’s the quintessential American story about four guys from the wrong side of the tracks who made it.”

“It’s exciting that we’re in New Brunswick, it’s a great place for theater,” says Hester who noted the forthcoming New Brunswick Performing Arts Center. “Even after 14 years, to be able to have a few firsts is exciting.” Tommaso Antico (Bob Gaudio) grew up in small town New Baltimore, MI, where he worked at his family’s Italian bakery. His love for the arts started in elementary school when he joined band. He later became involved in theatre and moved to New York at 18 by himself to study the arts. At 19, he went on the national tour of Cabaret and since has appeared Off- Broadway in Altarboyz, toured with Hairspray and has been in the films Revolutionary Road and Enchanted. He was recently seen in the closing cast of Jersey Boys on Broadway.