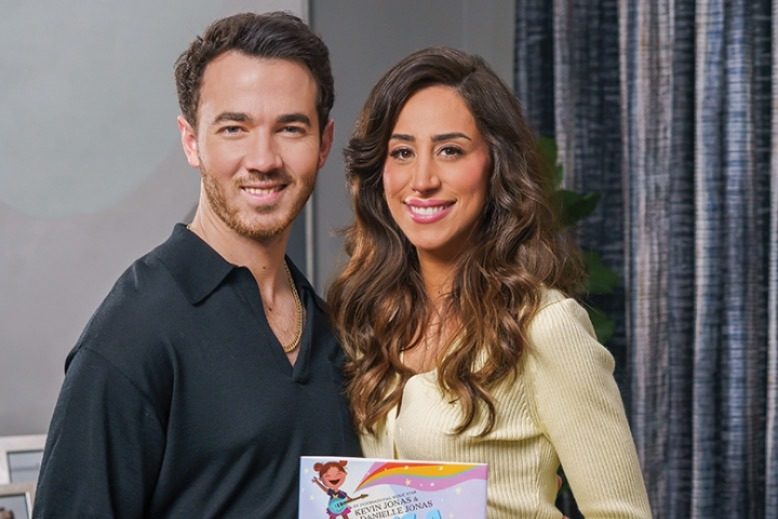 Kevin Jonas and wife Danielle Jonas, both New Jersey natives, are out with a children's book called "There's a Rock Concert in My Bedroom." Photo courtesy of Laurel Creative

The Garden State has always grown serious musical talent, from Frankie Valli and the Four Seasons to Jon Bon Jovi to Queen Latifah to Wyckoff’s own Jonas Brothers.

The Jonas Brothers—made up of real-life siblings Kevin, 34, Joe, 32, and Nick, 29— splashed onto the scene back in 2005, broke up in 2013, and reunited in 2019 to huge fanfare. The pop trio came back strong with a string of hits, like instant favorites Sucker and Only Human, and a comeback tour that ended just before the pandemic began.

These days, Kevin is the only bandmate who lives in New Jersey, where he knew he’d one day put down roots after his career brought him around the world. The reason? He made a promise at the start of his marriage to fellow Jersey native Danielle Jonas that they’d quickly settle down and raise a family here. “I got a year not in New Jersey,” Kevin says with a laugh. “Most of my work was elsewhere.”

The couple, who tied the knot in 2009, are raising their two daughters, 8-year-old Alena and 5-year-old Valentina, in Denville, just a few blocks from Danielle’s parents’ house and close to many of her childhood friends, which makes things easier when Kevin is on the road. “It’s been a blessing—really nice for us to have a safe place here and a community around us,” says Kevin.

Nick and Joe are now both based on the West Coast with their own growing families: Nick and his wife, Quantico star Priyanka Chopra, recently welcomed a baby via surrogate, while Joe and wife Sophie Turner, of Game of Thrones fame, had a daughter named Willa in 2020 and are reportedly expecting again.

But whenever Kevin’s family comes back to the East Coast, he and Danielle make sure they get their fill of Jersey delicacies. “We still bring the Taylor ham to them,” Danielle, 35, says. “Or the meatballs.” Adds Kevin, “We are true Jersey, through and through.” “There’s a Rock Concert in My Bedroom,” geared toward kids ages 4-8, is based in part on a real-life experience with Kevin and Danielle’s daughter Alena.

In Kevin and Danielle’s daily life, music is, of course, ever-present—though lately, Kevin says his own tunes have been “dethroned” around the house by the soundtrack to Disney’s ultra-popular movie Encanto, which just won an Oscar for Best Animated Feature Film. Kevin also tries to teach the girls music; while guitar is still a bit challenging with their small fingers, they love to “pretend along with me,” he says, adding: “We encourage the arts, but never force it.”

When Kevin is not on tour, the family loves spending time together outdoors and hitting towns like Montclair and Edgewater. They also head down the Shore each summer. “It’s our own version of the Hamptons; it really is incredible,” says Kevin (though he didn’t need to sell the Shore to us!).

The couple’s new project, a children’s book called There’s a Rock Concert in My Bedroom (out March 29 from Razorbill), is based in part on Alena’s own experience with a dance recital that became so serious for her, she almost stopped having fun. In the picture book, which is geared toward children ages 4-8, a girl named Emma overcomes her nerves before the school talent show by remembering—with some help from her family—to simply have a good time.

Books, Danielle finds, are an important tool for talking about feelings, especially with a child who is not forthcoming. “The biggest hurdle with kids is figuring out what’s going through their heads,” she says.

Never was that more apparent than during the pandemic. Danielle says Alena became worried about getting sick, while Valentina was too young to really understand the situation. Once restrictions lifted, Kevin and Danielle gave Alena the choice of being homeschooled or returning to in-person learning. She chose school to make new friends.

“It was an eye-opener talk to them,” says Danielle, while Kevin notes the girls are both “thriving.”