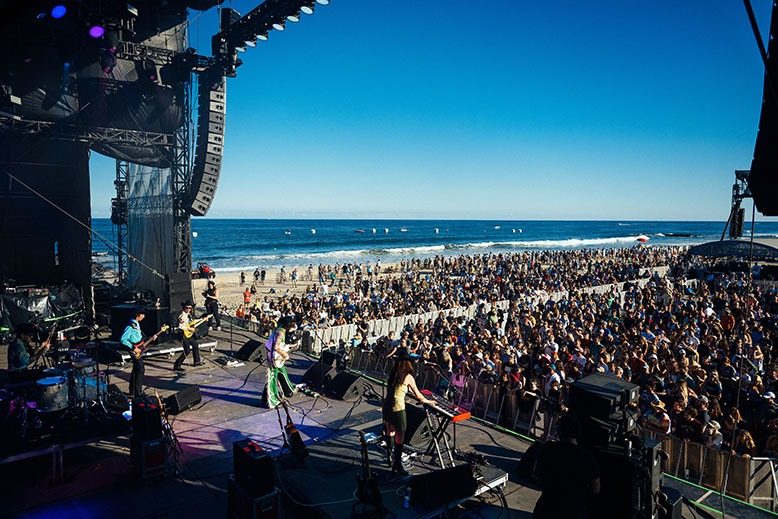 The successful event, along with modest art shows Donnelly hosted on the Asbury boardwalk, laid the foundation for what has become the annual—and beloved—Sea Hear Now festival. The event has attracted artists, surfers, superstar musicians and roughly 35,000 fans to Asbury Park’s waterfront every September since 2018 (except for 2020, because of the pandemic). The poster for the first Sea Hear Now festival in 2018 featured artists including Jack Johnson and Incubus. Photo courtesy of Sea Hear Now

Music icons Stevie Nicks and Green Day are headlining this year’s festival, which takes place  September 17-18 and incorporates three stages. A diverse undercard includes Cage the Elephant, the Head and the Heart, Gary Clark Jr. and My Morning Jacket, who return to the Shore nearly a decade after that initial relief concert.

“If it wasn’t for My Morning Jacket playing the Sandy benefit, I don’t know if there would be a Sea Hear Now or not,” Donnelly says. “It’s a very full-circle thing, especially for Danny and [me].”

Donnelly and Clinch knew each other while growing up in Toms River, but it wasn’t until after Donnelly graduated college in 1990 that the pals began to bond over their enthusiasm for Asbury and music. They have leaned heavily on the musical friendships they’ve made over the years, persuading big acts like Bruce Springsteen, Pearl Jam, Jack Johnson, Dave Matthews Band, the Lumineers and Smashing Pumpkins to perform in a place that was stuck on hard times not too long ago.

“We both loved Asbury Park,” Clinch says. “But Asbury was a shithole. We kept seeing these attempts at Asbury Park starting to come back, and then the politics would get in the way and things would just fall back into disrepair.

“We were just like, ‘Man, this place is inevitable. It’s gotta come back.’”

Clinch and Donnelly helped that effort when they convinced Tim Sweetwood, a promoter and producer at C3 Presents—which produces large-scale events like Lollapalooza and is owned by Live Nation—to make Asbury Park the site of the company’s next big festival. That, Clinch says, “was the turning point.” With the support of a reputable organizer, plus HM Wollman, another music industry veteran/surfer, a massive music festival became a reality.

But Clinch and Donnelly wanted more than music. They insisted on a festival that highlighted all of their passions, including art, surfing and environmental sustainability. Sea Hear Now encompasses all of that. Just like the bands, there is a deep roster of wave riders who compete each year. Clinch, meanwhile, runs the festival’s Transparent Gallery, which sells artwork made by the musicians. Proceeds go to local charities. Green initiatives can also be seen in action throughout the sandy jamboree. Of course, presenting a Jersey vibe is also important. While headliners come from all over, the lineup always features local acts. This year, that includes Dogs in a Pile, Dentist, Fletcher, the Vansaders, and Lost in Society. All have Asbury roots. And food vendors from Sandy Hook to the tip of Long Beach Island tempt festival-goers with their delicacies.

“It’s reflecting the community that we live in,” says Donnelly, who’s been an Asbury resident for 15 years. “It’s reflective of the people who are coming to the festival.”

Donnelly and Clinch take immense pride in contributing to the Shore’s culture. Donnelly notes that people who live down the Shore year-round don’t necessarily experience summer the same way visitors might.

“September,” he says, “is our time to rejoice in the splendor of where we live.” That idea played a part in the timing of Sea Hear Now. It’s a beach bash for everyone, but especially those who call Asbury Park home.

“It’s the last great party of the summer, but it’s also for people who live at the Jersey Shore,” Donnelly says. “Asbury Park has been built on a good time. So to be able to provide that platform for people and do it in a distinctly New Jersey way—it’s a great actualization of 21st-century New Jersey, especially the Jersey Shore.”