On Collingswood’s Restaurant Row, it’s worth venturing a few blocks west of the main action to the 32-seat corner storefront that, in 2015, became Oasis Mexican Grill. Inside, chef/owner Rogelio Garcia and his family focus on the food of their native Puebla.

Garcia, 50, began cooking in his hometown of Xixingo de los Reyes at age 16. One of his Puebla specialties is pipian verde, the garlicky, herbaceous green sauce whose key ingredient is ground pepitas (pumpkin seeds). “It’s very labor intensive,” says his son, Alberto, who manages Oasis and translates for his father. “We make it true to how it’s done in Puebla, using a hand-cranked grinder.”

For dessert, it’s hard to choose between the fried sweet plantains with sweetened condensed milk and the hot, crispy, doughnut-like churros with strawberry ice cream. So don’t. Have both.

In addition to putting Oasis on Open Table, a rarity for mom-and-pop Mexican restaurants, Alberto created an Instagram feed and posts pictures that amount to visual catnip.—AE
498 Haddon Avenue, 856-858-1807; BYO.

At 8 pm on a recent Friday, when other Mexican restaurants in the neighborhood were sparsely occupied, every table at El Oaxaqueño was full, and people were standing in the doorway waiting for takeout orders.

Nearly everyone was Latino. Amid the line of tables that face the open, luncheonette-like kitchen, a four-piece mariachi band in white cowboy hats was playing and singing, gratefully pocketing the occasional bill from an appreciative customer. Soon they left and made their way down the street, true wandering minstrels. Then a woman clutching flower bouquets came in, selling them for $10 apiece. She found a few takers.

Meanwhile, the kitchen of the 10-year-old restaurant kept churning out heaping platters of food, many from Oaxaca, the homeland of husband-and-wife owners Adrian Juarez and Virginia Santiago. Typical was the burro mole, bulging with chopped pork and drenched with dark mole, melted cheese and crema.—EL
260 Drift Street, 732-545-6869; BYO.

The name, pronounced “au-ra-lay,” is Spanish slang for, “Hell, yeah!” Which is the vibe radiated by the bounteous aromas, rock soundtrack, young crowd and every inch of merrily macabre wall painting. The food and cocktails are equally spirited and creative. Chef James Muir, who opened Órale in 2013 with two old friends he worked with at Rosa Mexicano, presents a mole budin that makes pulled chicken a finger-licking fiesta. On the Eat My Guac menu, the add-ons are worth agonizing over.

Taco toppings riff on the filling, as in a recent duck-confit taco with blackberry port wine reduction, blackberry crema and red cabbage slaw. Finish with the most sophisticated tres leche cake yet, a layered cylinder of lemon-poppyseed pound cake in a moat of strawberry Grand Marnier coulis.—EL
341 Grove Street, 201-333-0001. Recent arrivals from Oaxaca, Francisco Vazquez and Elvia Gonzalez met in New Jersey in 1988 and married the next year. Vazquez worked as an audio-video technician, while Gonzalez slowly became an expert cook, “mostly through long phone calls with her mom in Oaxaca,” says her husband. “Now she has all the secrets.” You can taste the proof at Pancho’s, which they opened in 2012. Her enchiladas verdes, filled with tender pulled chicken, swims in a sprightly green tomatillo sauce and is lavished with lettuce, onions, melted cheese and squiggles of sour cream. It’s Pancho’s bestseller. Equally worthy, and better than most you’ll find, is her pambazo, a king-size sandwich filled with chorizo-potato hash, sour cream, lettuce and cheese. The white-bread rolls of some pambazos seem merely brushed with the defining mildly spicy red sauce. Hers is fully dipped in the sauce, then grilled for a crisp, rust-colored coat. Pancho’s dark, thick mole poblano, laboriously made from scratch and served over chicken, presents its seductive chocolate tones like a genteel calling card before the entourage of spices and chilies arrive and declare a party.—EL
83 Main Street, 732-537-0152; BYO. 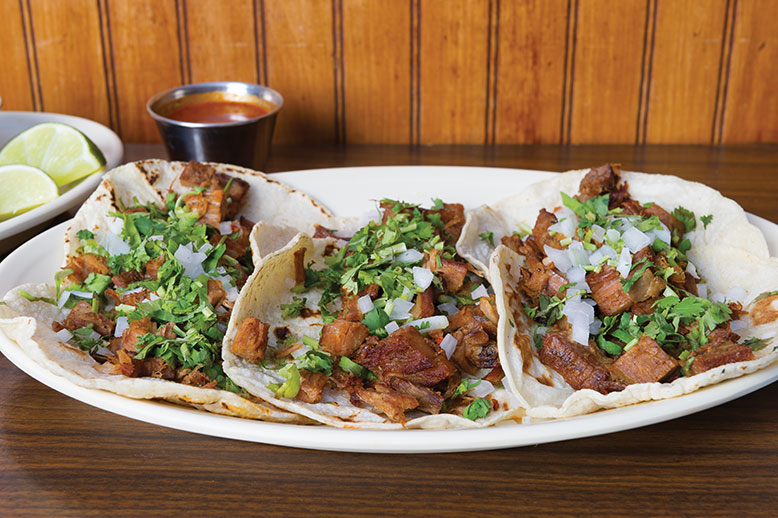 Fabiola Sanchez, who is Colombian, opened Pancho’s in 2006 “as a typical Mexican taqueria to serve Mexicans and Latinos who work at the casinos,” says her son, Joshua Cruz, 32. Together, they do all the cooking “in front of our customers,” he says. Even the tortillas are cooked to order. That is almost unheard of, because it takes time to roll out the masa dough and cut and griddle it. But the results are sublime. Last year, chef David Chang, emperor of the Momofuku empire, visited and, in a brief review on his Lucky Peach website, called Pancho’s “the best Mexican food on the East Coast.” Cruz was unaware of the rave until we called it to his attention. (Upon reading the review, his reaction was, “Wow!”) He allowed that he “noticed more Anglos came to my restaurant in 2016,” but attributed it to earlier attention from local media. Either way, he can certainly brag about Chang to his famous next-door neighbor, the White House Sub Shop. But he’s content to keep turning out terrific tacos topped with tender chunks of brisket or al pastor pork brightened with pineapple. And his enchiladas in a mudslide of mole poblano heady with cinnamon and clove are transcendent enough to soothe even the largest casino loss.—AE
2303 Arctic Avenue, 609-344-2062; BYO.

The Popoca-Martinez family didn’t have to look far when they decided to move their popular Berlin restaurant, Parrilla Fogata (“campfire grill”), to larger quarters. This spring, they found the perfect space in the same strip mall, just two storefronts away, and renamed it Parrilla La Nuevo Fogata. Bryan Popoca-Martinez runs the place with his siblings, Sergio, Alma and Joselyn, and their parents, Benito and Letitia, who came to Jersey in 2001 from Puebla and Mexico City, respectively. Though the restaurant is cash only, the clan’s ethos is expressed in its cheerful hospitality and in the quality and generosity of its food: tacos filled with hillocks of diced smoked pork; fried masa dough huaraches piled with toppings, overhanging their plates.

In the Western state of Jalisco, a lady is known as a Tapatia, and a beautiful long-tressed one in a sombrero is Plaza Tapatia’s symbol. Heroic men and women from Mexican history are hand painted in mythic style on the back of many of the dining-room chairs. Jalisco, where Tapatia owner German Garcia, 44, was born and raised, includes the city of Tequila, and you will have many of those agave liquors to choose from at your table or the bar. Jalisco’s signature dish, birria, a rich beef stew, is a monthly special. The menu, mostly Pueblan, includes excellent tamales; chunky guacamole; and carnitas and lengue tacos. Garcia began in 1998 with a small grocery, which he later turned into La Tapatia restaurant. Now the family’s domain covers half a block, encompassing a large grocery, bakery, liquor store, taqueria, and the showplace, Plaza Tapatia, twice expanded, most recently this year.—EL
707 Main Street, 732-776-7826.