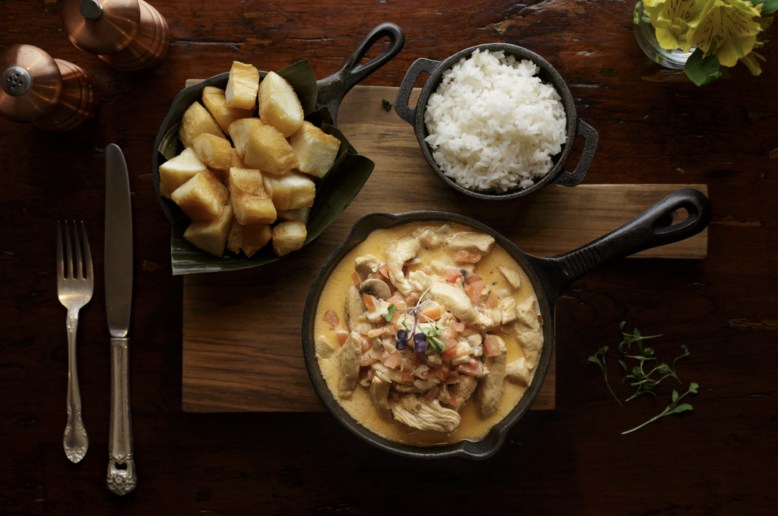 A hearty meal at Samba, served with warm cheese biscuits. Courtesy of Samba

Montclair, always a major restaurant destination, is unusual in that it has three “downtowns”—north (Upper Montclair), central (Watchung Plaza) and south. The latter is the biggest, consuming a mile of Bloomfield Avenue, with restaurants on or just off the avenue, and along Walnut Street, which runs parallel to Bloomfield Avenue a few blocks north. Dig in. The range of choices is striking.

Here are our top picks for the best restaurants in Montclair, in alphabetical order. Tomasso Colao plays three instruments: alto sax, flute and wood-fired pizza oven. He is an artist on all three. His delicate pies are as close to the Neapolitan ideal as you’ll find anywhere, and they pair well with his detailed salads. They’re so good, in fact, that Bivio appeared on our guide to the state’s best pizza. With just 24 seats in this lovely old storefront, waits are not uncommon, but they’re worth it. BYO.
107 Pine Street, 973-941-9602 The Italian home cooking at Da Pepo is as authentic and compelling as the space is a bit, well, tight. There are 19 seats, including three at a narrow counter. But after a career cooking in big Italian-American restaurants, chef Carlo Orrico is living his dream, cooking time-tested family recipes from Southern Italy. BYO.
54 Fairfield Street, 973-655-8825 An elegant scallop dish at Fascino. Courtesy of Fascino

Since chef Ryan DePersio and his family opened Fascino in 2003, they have kept it Montclair’s go-to for modern Italian food. (It made our 2021 list of New Jersey’s 30 Best Restaurants.) Fresh pastas are a strength, and main courses are substantial. You don’t have to be a vegetarian to find the three-course vegetarian menu sensuous and satisfying. BYO.
331 Bloomfield Avenue, 973-233-0350 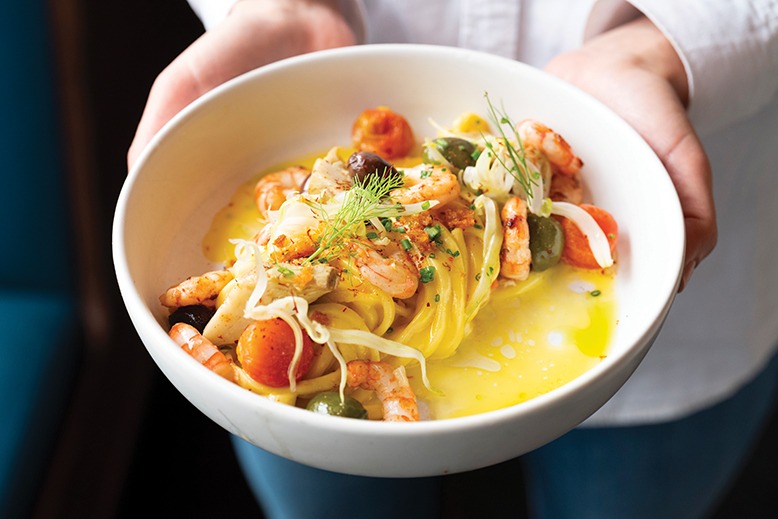 Linguini and red shrimp with artichokes, olives, saffron and lemon, makes a fine starter or main. Photo by Paul Bartholomew

After distinguished careers with the famed Daniel Boulud, chef Olivier Muller and manager Dominique Paulin set out to create their own palace of modern Mediterranean cuisine with French accents. Transforming a long-ago bank from empty shell to stunning showcase, complete with an outdoor bar and multilevel patio, might be their greatest achievement. Which is not to dis the food at Faubourg, which ranges from the adept and endearing coq au vin to the fricassée of snails and chicken “oysters,” which hits like a slot machine jackpot. It earned a spot on our 2021 list of New Jersey’s 30 Best Restaurants.
544 Bloomfield Avenue, 973-543-7700

The dining room is simple but pleasant, and the cooking is good. The classic Korean rice bowls—bibimbap and bulgogi, among others—can be ordered in a sizzling hot stone bowl. There are soups, vegetable dishes and a kids’ menu to bolster the selection of spicy grilled meat entrees. BYO.
128 Watchung Avenue, 973-509-7800

Several restaurants in this space on Montclair’s main drag failed to win a following until chef James DeSisto took it over in 2014. His decision to retain the name of the failed place that immediately preceded him seemed questionable at first. But he has clearly made the name his own and earned a loyal following. And why not? His New American food, with highly credible French and Italian dishes, is delicious and well-executed. Prices are eminently reasonable, portions are generous, and the space is soothing and comfortable. BYO.
615 Bloomfield Avenue, 973-746-6100

The storefront is tiny; the rustic interior is packed with small wooden tables, antiques and an open kitchen run by John and Christina Salierno. When it opened in 2012, Salbuen first won fans for boosting breakfast and brunch staples to flavorful new heights (using organic ingredients, and offering gluten-free options). More recently, the Saliernos have added dinner, applying the same flavor-forward ideas to a range of European and New American dishes. BYO.
97 Walnut Street, 201-622-8473

Growing up in Israel, Meny Vaknin learned to cook from his Moroccan Jewish mother. Vaknin’s Mediterranean influences and baking skills have made Marcel a community hot spot since it opened in 2017. It works as a grab-and-go cafe or a schmooze fest at its community table and two-tops. Hits include shakshuka, hummus or rice bowls topped with meat or vegetables; shwarma chicken tacos; and a variety of smoothies and coffee drinks. BYO.
631 1/2 Valley Road, 973-842-4088

Despite never having worked in a restaurant, sisters Berekti and Akberet Mengistu fearlessly opened Mesob in 2003. They’d grown up in an Ethiopian family of 10 children; with relatives dropping by all the time, cooking dinner for 40 on little notice was no big deal. They figured they could handle it—and they were right. Patrons have taken to the Ethiopian way of eating—scooping up subtly spiced meat and vegetable stews with hand-torn strips of cool, spongy injera, Ethiopia’s uniquely absorbent sourdough crepes. BYO.
515 Bloomfield Avenue, 973-655-9000

Stefano Bosetti, born and raised in Trento, northern Italy, says he grew up “putting a finger in everything my mother was making.” She was a professional cook, and he followed in her footsteps, first in Italy, and since 1994, in New York. In July 2021, he and his friend Massimo Apicella, having moved to New Jersey, opened Palato, a place as compact (about 20 seats at small tables, including one in the front window) as it is big in flavor, spirit and value. (The restaurant made our Best New Restaurants list in February 2022.) On offer: Polenta with mixed mushrooms and melted fontina, lush and crusty eggplant parm, served sizzling in a black-steel pan; and personal-size pizzas. The squid-ink pasta with crabmeat, garlic and Fresno peppers tops the price list at $22.95, and it’s big enough to feed two. BYO.
377 Bloomfield Avenue, 973-509-0416 Raymond’s serves up American staples in a vintage-luncheonette setting. Courtesy of Raymond’s

One of Montclair’s most popular meeting places, and for good reason. The built-from-scratch interior could be the set of a luncheonette from a 1940s Hollywood movie. The menu is basically all the American favorites people love to eat. The prices are reasonable, and there’s outdoor seating in warm weather. BYO.
28 Church St, 973-744-9263

One of the better breakfast/lunch/brunch spots in town, Red Eye aces the staples and also offers such rewarding mashups as coconut grits (a bowl of grits mixed with shredded chorizo and toasted coconut, topped with two fried eggs). Brunch includes enticing twists like Hong Kong waffles, made with a custard base and tapioca flour for a firmer, denser texture. BYO.
94 Walnut St, 973-509-3663

Brazilian native Ilson Goncalves opened Samba in 2011, and ever since has been showing patrons there is more to Brazilian food than steak (though his sirloins are very good). Grilled salmon with passion fruit sauce, and baked acorn squash filled with shrimp, squash and Parmesan, are standouts. And you don’t have to be gluten-free to be greedy for the warm cheese biscuits. BYO.
7 Park Street, 973-744-6764

Chef Michael Cetrulo opened Scala del Nonna (“steps of the grandmother”) in 2014. He serves up sumptuous Italian food under a vaulted ceiling that adds a touch of elegance to the warm hospitality, which is overseen by Cetrulo’s sister, Sally Gildea. BYO.
32 Church Street, 973-744-3300

The initials stand for “Simple Love Authentic”—and owner Meiji Pattamasingchai radiates the L word. She grew up in northern Thailand and learned the local cuisine (the A word) from her mother, a caterer. Her menu, prepared by her husband Paul Phaisanyakit, is too rich in flavor and varied in texture to be summed up by the S word. Spice levels are adjustable on request. BYO.
38 Upper Montclair Plaza (off Valley Road), 973-509-0111 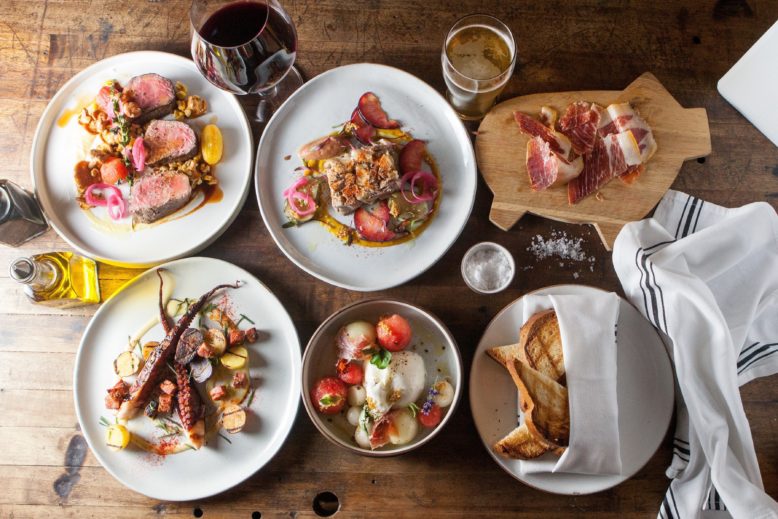 Montclair native Lauren Hirschberg rose to a high level in celebrity chef Tom Colicchio’s Crafted Hospitality organization. In 2015, Hirschberg and longtime friend Matt Trevenen fulfilled their dream of opening their own New American restaurant in their hometown. The food is hearty and contemporary; the atmosphere hip and relaxed. BYO.
622 Valley Road, 973-783-9800