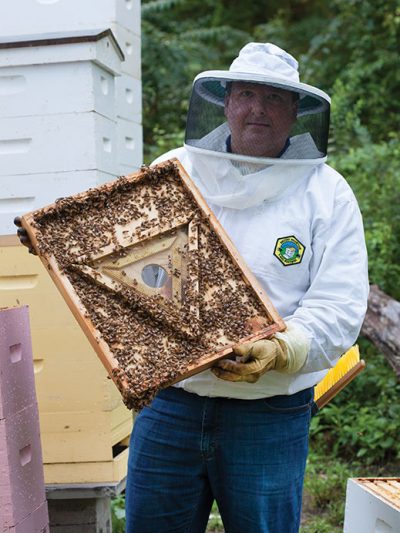 Apiarist Frank Mortimer works his hives in Upper Saddle River. Mortimer had never been around a beehive before he started keeping bees in 2007.
Photo by Evan Sklar

Frank Mortimer stands in a quiet patch of woods in Upper Saddle River. Bees buzz all around him, zipping among the five tall beehives that Mortimer maintains. He carefully lifts apart the sections of the hives, peering at the creatures through his beekeeper’s mask as they go about their work caring for larvae, building intricate combs, maintaining the hives and making honey.

For Mortimer, 51, beekeeping is a passion—something he does in his spare time. As the president of the northeast chapter of the New Jersey Beekeepers Association (NJBA), Mortimer guides beekeeping hobbyists—primarily in Bergen and Passaic counties—on getting started in beekeeping and creating healthy hives. In 2011, when Mortimer took the reins of his chapter, there were 37 members. Today, there are more than 170 members, many of whom produce honey from hives tucked away in one of the most densely populated parts of the country.

“We have people in Clifton, people in Jersey City, Paterson and West New York, who are members,” Mortimer says. “You don’t need this giant swath of property.”

Tim Schuler, state apiarist—another word for beekeepers—for the New Jersey Department of Agriculture, confirms the Garden State’s beekeeping boom. According to Schuler, in 2007, the NJBA had about 400 members; by 2016, that number had tripled to about 1,200. He estimates as many as 5,000 New Jerseyans are keeping bees.

Schuler links the increase in backyard apiarists to the growing concern over the fate of the honeybee. According to a May 2016 report from the U.S. Department of Agriculture, honeybee colonies in the United States decreased by 8 percent in the 12 months ending January 2016. The main reported cause of colony loss is the Varroa mite, a small, external parasite that attacks honeybees. The USDA reported an increasing number of colonies with symptoms of Colony Collapse Disorder from January to March 2016 compared to the same quarter a year ago. The disorder means worker bees abandon a hive and the queen, who stays behind with a handful of nurse bees.  Honeybees are the primary U.S. pollinators and a major factor in successful fruit and vegetable production.

“There has been a lot of media attention about the plight of the honeybee,” says Schuler. “People read about it, they hear about it, it is something they can do in their backyard.”

One of Schuler’s main roles as state apiarist is making sure New Jersey bees stay healthy. To that end, he travels the state advising hobbyists and commercial beekeepers on maintaining hive health.  He insists on one thing: All hives in New Jersey must be registered with the state Department of Agriculture.

“There’s a tremendous amount of people who get involved in beekeeping who don’t register their locations. They think that because they have one hive in their backyard, it is not necessary,” says Schuler, adding that this oversight is usually unintentional. “Even if you have one hive in your yard, if it becomes diseased, it can spread to other beekeepers within a two- to three-mile radius of your location.”

Honeybees live in colonies of up to 60,000 bees. Colonies have one queen bee and as many as 500 to 4,000 male drones—but the majority of bees in a colony are female worker bees, responsible for collecting nectar and pollen from flowering trees and plants. In New Jersey, says Schuler, bees primarily collect their nectar from flowering trees, shrubs and vegetative plants. In rural portions of the state, bees can collect nectar from crops like blueberries and cranberries.

Usually, the main honey flows in New Jersey start around the first or second week of April, depending on the weather. The honey flows are generally over by about July 4. Hives will sometimes produce a fall honey flow from late September through early October. Once the weather turns colder, bees stop flying and cluster in their hives.

Schuler says buying honey locally is a source of pride for many. Some consume local honey to alleviate allergies; they want their honey produced as close to home as possible so that it is exposed to pollen from local plants.

“I know some beekeepers who keep beehives in multiple towns and when they label their honeys they actually put the zip code of the town that honey came from,” says Schuler.

For River Edge’s Diane Churchill, two of the appealing aspects of the hobby are the affordability and the ease of maintaining hives. A full beekeeping setup runs a new beekeeper $500 to $750, including the clothing, the cost of the hives, a nucleus (a hive portion containing a queen and enough other bees to get started) and a smoker. Beekeeping can take as little as one hour of maintenance per week, with little work in the winter when the bees are clustered in their hives. Removing the honey from the hives requires an extractor; most beginners can borrow one from others in the hobby, who also can provide guidance on extracting and bottling.

Churchill started keeping bees alongside her father, Walter, when she was a young girl, but over the years, their bees died off. Seven or eight years ago, the two got back into beekeeping, in part to support the health of the honeybee.

While Churchill has a long history with beekeeping, Mortimer has only been at it since 2007. Lack of experience, he says, shouldn’t deter anyone interested in becoming a beekeeper.

“For years before I did it, I thought it would be really cool, and I never was around a beehive, ever,” says Mortimer, “But something just drew me to it.”

Perhaps it was the buzz about this fun and fruitful hobby.