The tiny, single-engine plane flew low over a desolate expanse of South Jersey woods and water. Inside, Pete McLain and Jo Ann Frier grew apprehensive as they scanned the terrain below. Their near-impossible mission: to find the last breeding pair of bald eagles in New Jersey.

The date was January 28, 1976. McLain and Frier were part of a new state agency created after the 1973 passage of the federal Endangered Species Act and similar legislation in New Jersey. The bald eagle, America’s national bird, was high on the endangered list. To save the state’s last breeding pair, McLain and Frier had to find their nest. They knew it was somewhere above the vast Bear Swamp in Cumberland County. According to Frier, only one eagle devotee knew the exact location, but he wasn’t saying. “I think they were afraid we’d disturb the birds,” says Frier-Murza (she married in 1984).

Armed with few clues, the two wildlife biologists began their search. “Pete and I got a plane, and we went barnstorming,” Frier-Murza says. “It was a crazy flight. We couldn’t see the nest from high up because of the way the woodland was constructed, so we had to keep flying back and forth. It was so loud in the cockpit that we could only point.”

Finally, Frier-Murza spotted the nest atop a tall pine. It was a glorious moment, but it was just the first chapter in the little-known saga of a handful of wildlife professionals and volunteers, who, against all odds, saved New Jersey’s bald eagles for generations to come.

The nation’s symbol had long flourished in the Garden State. But beginning in the late 1800s, eagles—which prey on valuable fish such as salmon and occasionally, farmers’ chickens—were deemed a nuisance to be hunted and eradicated across America. The coup de grâce arrived in the 1940s in the form of DDT, a widely used agricultural pesticide that was later proven to be harmful to wildlife. DDT entered the food chain and accumulated in raptors’ fatty tissues, causing the females to produce eggs with thin, fragile shells that could not support the weight of the adult eagles during incubation. The thin shells also allowed moisture loss, which killed the embryos.

One by one, New Jersey’s eagle nests failed to produce chicks. The adults moved past their reproductive years and died off. By the early 1970s, all seemed lost—although the agricultural use of DDT was banned in the United States in 1972.

Enter McLain, Frier and the Endangered and Nongame Species Program (ENSP). They had found the nest, but they weren’t out of the woods. For several years, an ENSP volunteer from Cumberland County, Mark Hedden, kept an eye on the nest through a telescope. He observed that the eagles were incubating at least one egg in late winter each year, but no chicks emerged. Photo courtesy of NJ Division of Fish and Wildlife

It was clear the eagles needed help. Fortunately, government researchers at the Patuxent Wildlife Research Center, 100 miles away in Maryland, were having success hatching eagle eggs in an incubator.

Beginning in 1982, a professional climber scaled Bear Swamp’s 90-foot-tall nest tree, removing the eggs and substituting plaster ones. The real eggs were placed in a cushioned case and transported to Patuxent. A hot-water bottle in the case kept the precious cargo at about 98 degrees.

Wildlife biologist Kathy Clark, who now oversees the ENSP’s eagle recovery program, was one of the egg transporters. “I checked the temperature constantly and closed or opened the case as needed,” says Clark, who was then fresh out of grad school. “It felt like a huge responsibility—holding our eagle future in that box.”

At Patuxent, the mechanical incubator did its job. When the chicks were old enough, they were brought to the nest and substituted for the dummy eggs. The parents immediately took them under their wings.

In 1984, disaster nearly struck. As ENSP biologist Larry Niles was climbing the nest tree with that season’s hatchlings, a limb snapped. There was no safety line, but Niles managed to avoid falling and retied himself to a stronger branch. He was then able to place the chicks in the nest, but the calamity highlighted a new problem. The majestic nest tree, estimated to be 100 years old, was dying. The eagles would likely relocate, possibly in another state.

Niles, an experienced carpenter, had the answer: Build a nest the way an eagle would. That December, ENSP staff went to work. With the others hoisting chicken wire, a supply of 4-foot-long sticks, sphagnum moss and wild grasses (for the nest’s bowl), Niles constructed the nest atop a nearby pine.

A week after Niles and his crew finished, the Bear Swamp eagles delivered their verdict. They took up residence at their new address. Niles was elated.

“I felt like I had given them a new home in the center of a place that would be protected forever,” Niles recalls. “It ended up being one of my greatest achievements.”

By then, Patuxent had devised a new incubation method using Cochin bantam chickens, which were light enough not to crack the thinned eggshells. To accelerate the bald eagle’s comeback, chicks were flown in. Larry Niles, left, inspects an arrival at JFK. Photo courtesy of NJ Division of Fish and Wildlife

“I loved the idea on so many levels,” says Stephen Paturzo, who worked for ENSP on and off from the 1980s through the early 2000s. “The irony that these large predators were being hatched by birds that were so edible wasn’t lost on anyone.”

Long-distance incubation continued for several years, when a new female eagle took over the Bear Swamp nest, likely with the old male. Because the younger eagle had absorbed less DDT, the pair could hatch their eggs on their own.

Human challenges remained. A mining company owned the land where the eagles lived, and its operations increasingly encroached on the nest. The middle of nowhere turned out to be somewhere.

The state Department of Environmental Protection realized it had to buy the land. After two years of futile negotiations, the state used its power of eminent domain to acquire 1,500 acres to protect the nest.

The mining company went to court to fight the move, telling the judge that protecting a nest did not serve a valid public purpose.

“The deputy attorney general representing DEP asked if he could approach the bench, and he gave the judge pictures of us holding baby bald eagles when they were put back in the nest,” recalls Michael Catania, then in-house counsel for the DEP and now executive director of Duke Farms in Hillsborough.

“The judge looks at the photos of the baby eagles and says, ‘Oh my God, they’re incredibly cute!’ Then he looks at the mining company’s lawyer and says, ‘So let me get this straight. Your argument is that permanently protecting the symbol of our nation’s liberty found in New Jersey is not a public purpose?’

“The judge slams the gavel down and says, ‘Not in my court. Case dismissed.’”

To improve the eagles’ odds for recovery, New Jersey began importing eaglets from Canada, where DDT had not wrought as much damage. Researchers took one chick from nests with three eaglets in Nova Scotia and Manitoba and flew them to the Garden State, where they released the juveniles into their new habitat in hopes they would take to man-made nests and repopulate the area—a process called hacking.

“Each of those was an important step,” says Clark. “We had to save Bear Swamp from becoming a sand mine, and we had to bring in young eagles to get the New Jersey population going.” 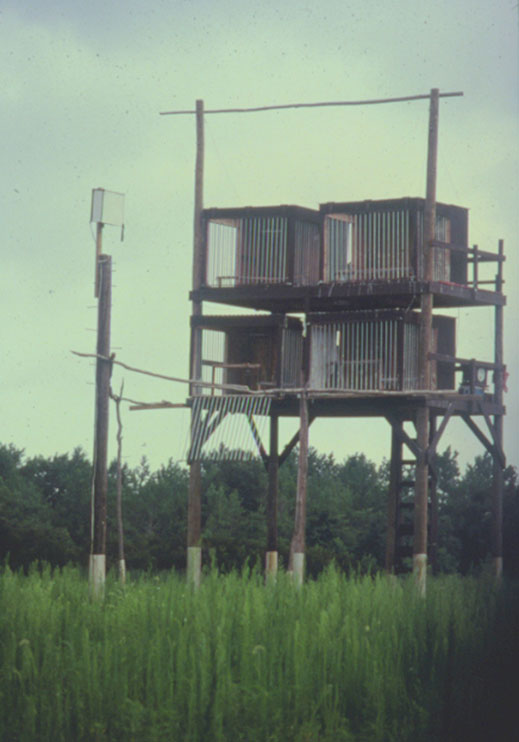 Eagle chicks were raised with a minimum of human contact in this avian apartment house. Photo courtesy of NJ Division of Fish and Wildlife

The first hack site was at the Glades near Turkey Point, a remote spot three miles from Bear Swamp. (A signpost proclaimed, “Turkey Point. Population: 8.”) The hack site consisted of a two-level structure built on telephone poles on the edge of a field next to wetlands—a perfect place to raise eaglets.

“The chicks were brought here when they were about six weeks old and placed in the tower, two birds per cage,” says Niles. “They were fed through doors so they weren’t directly fed by humans, and then eventually released.”

The staff lived in trailers on-site, using a porta-potty, solar-heated showers, and bottled drinking water because the groundwater gave off a strong sulfuric smell.

For company, they mostly had insects. “That place had every biting bug you could imagine,” recalls Paturzo. “Tiny no-see-ums, mosquitoes, deer flies, greenheads, ticks, chiggers. All in great numbers.”

For Niles, participating in the hacking was a life changer: “To have such an intimate relationship with the eagles had a great effect on me as a biologist because you could see how much individual variations there were in birds.”

Already, the eagle population had started to rebound. Bear Swamp and the hacking project produced more than 60 young who, several years later, built nests of their own. By the mid-1990s, biologists were confident they had laid the groundwork for bald eagle recovery in New Jersey.

“First of all, we established a system that protects the habitat and the nests,” says Niles. “Our rigorous defense of the nests laid down the framework for protection at the key stages—when they are nesting and incubating, and when the chicks are first fledged and vulnerable. That’s a big deal.

“But,” he adds, “we also started an effort where volunteers monitored the nest. That’s a big part of why the program is successful. Once people adopt a nest, they become religious about it. When things went wrong, we knew about it right away.”

As for the rebuilt Bear Swamp nest, little has changed.

“Bear Swamp is still one of our toughest nest sites to access,” says Clark. “It was and is a wild place.”

Today, New Jersey has more than 160 eagle nests in 20 of its 21 counties. The raptors can produce more than 200 chicks a year.

“The bald eagle’s future in New Jersey is bright,” says ENSP chief Dave Jenkins. “We have to keep our eye on things like water quality and contaminants, and the impacts that long-term changes in our climate might have on food abundance, but I don’t see anything on the horizon that’s going to interfere with their continued recovery.” (The eagles’ diet is varied, but they feed mostly on fish.)

Jenkins predicts the bald eagle population will eventually level off as the birds compete for territory. In the meantime, these raptors, which were thought to value solitude, have taken to nesting in heavily populated areas. That suggests that humans could once again disturb the eagles’ feeding and nesting. “At the same time, eagles in urban/suburban areas are more likely to learn to tolerate a greater deal of disturbance,” Jenkins says. “We have to rethink our understanding of eagles’ interactions with people.”

It’s a problem no one dreamed of 40 years ago.

“When we started, our goal was 10 nests,” Frier-Murza recalls. “We truly thought that [remote areas were] the only suitable habitat we would be able to provide them with. But they’ve seemed to adapt to being around people. Our New Jersey eagles have adopted our New Jersey lifestyle.”

Jim Wright writes The Bird Watcher column for the Record. He is the author of a new e-book about the nesting bald eagles at Duke Farms.