During the heyday of America’s railroads, 1,650 miles of track zigzagged through New Jersey, linking some 1,000 stations that served passengers and freight. So, it should come as no surprise that New Jersey has more historic railroad stations than any other state. More than 100 date before World War II; approximately 60 are listed on the National Register of Historic Places. Some remain active as rail stations; others are put to various community uses.

The first passenger stations—dating from the 1840s to the late 1870s—were little more than wooden sheds. One of those stations, Long-a-Coming, built in 1856 in what is now the Camden County borough of Berlin, stands today as the state’s oldest extant railroad station. However, as railroads grew in wealth and political power from the late 1870s to the 1920s, train stations became increasingly more elaborate masterpieces in stone, brick, concrete and wood. Some were designed by the era’s foremost architectural firms.

In building passenger railroad stations there was always a dynamic tension between engineering and architecture. Stations exist to provide access and shelter for passengers, facilitate ticket sales and accommodate engineering functions. But local civic pressure and corporate pride often called for these practical facilities to become eye-popping temples to progress.

These days, New Jersey Transit has 166 stations and 530 miles of track, but New Jersey is lucky to have a treasure trove of historic stations. The examples listed here are all on the National Register of Historic Places. Most are organized roughly north to south.

Built in 1875 by the New York & Long Branch Railroad, which was later absorbed into the Central Railroad of New Jersey. An excellent example of a small-town station, the three-story Victorian-stick style building sports lots of gingerbread trim along its roofline. Notable visitors over the years included presidents Ulysses S. Grant and Franklin D. Roosevelt, as well as King George VI of England in 1939. Hillsdale station on Bergen County’s Pascack Valley Line is architecturally similar. 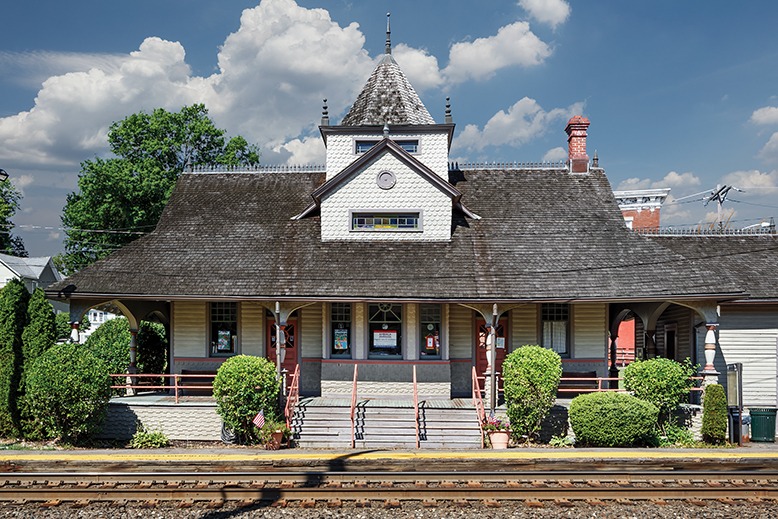 The wood-frame, 1-1/2-story-tall, Queen Anne-style station was rebuilt in 1890 with an overhanging shingled roof to provide extra shelter for passengers. Its ornate design was probably the work of the Erie Railroad’s engineering department. The National Register nominating form noted Oradell has always been an important commuter stop, but the station also served as a control point for signals and switches. “It was staffed around-the-clock, which may account for its relatively large size,” says the document. Today, a portion of the interior is leased to a design studio. The Dutch Colonial Revival building was designed to blend with the local Dutch Colonial architecture. The austere building features a sandstone façade, 14-foot vaulted ceiling and white clapboard at the gable ends. Built in 1929, it was designed for one of the nation’s first planned communities—a “town for the motor age” where transportation systems were separated by method of travel. Pedestrian paths, for example, didn’t cross any roads. 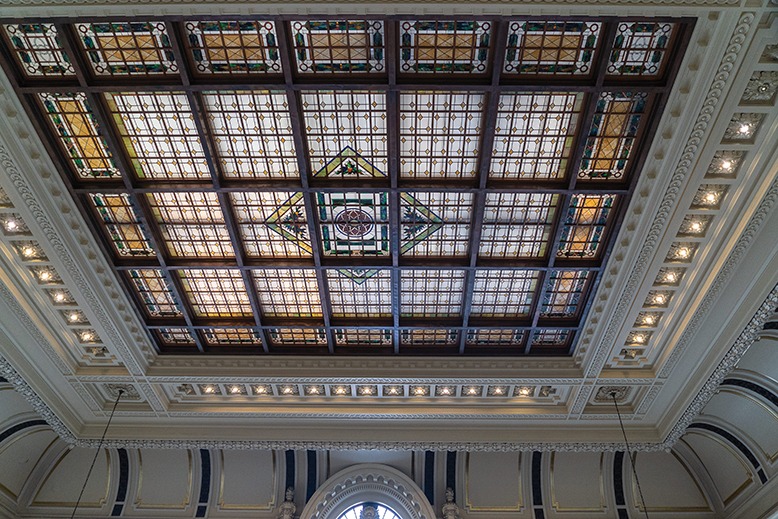 Built in 1907 by prominent New York City architect Kenneth Murchison in Beaux Arts style with Gothic touches, the station extends over the Hudson River on thousands of wooden pilings. Its weather-beaten exterior gives no hint of what’s inside: a dramatic, two-story, central-hall waiting room with a Tiffany glass ceiling. The hall was designed to hold 20,000 people at rush hour—because the ferry to and from Manhattan was frequently late. The terminal was a true early 20th-century intermodal transit center, where trolley cars, ferries, commuter trains and traditional railroads converged. Buses have replaced the trolleys, but the terminal still plays a similar intermodal role. Dating from 1889, with some 1914 refurbishments, the terminal (sometimes called Communipaw Terminal) was designed by William H. Peddle of the premier Boston architectural firm Peabody & Stearns, replacing an 1864 building. The architect also designed Lawrenceville School in New Jersey and the U.S. Custom House Tower in Boston. The terminal—with its three-story, centered bell tower—was designed in the Richardsonian Romanesque style and was another early intermodal facility serving ferryboats, trolleys, horse-drawn carriages, commuter and long-distance trains. An estimated 10.5 million immigrants passed through the station in its 78-year history (it closed in 1967) after leaving the nearby Ellis Island immigration inspection and processing center.

Designed by William Hull Botsford—a resident of Orange and chief architect of the DL&W from 1910 until his death aboard the Titanic in April 1912—the mostly brick, temple-like structure is an example of Grecian-Doric design. In recent years, parts of the terminal have been home to a restaurant and a mini-mall. A current proposal for mixed residential and commercial development on the site would preserve certain features of the original 1913 station. The organization Preservation New Jersey lists the station as one of the state’s most endangered properties. Built in 1903 of brick and stone in an elegant Renaissance Revival style, the hallmark of DL&W architect Frank Nies. The 80-foot Campanile-style clocktower is a Newark landmark. The 24-mile rail route between Newark and Morristown, one of the oldest in the nation, dates to 1838, when the Morris & Essex Railroad began service. The station once served long-distance passengers to Scranton, Buffalo and points west.

A symbol of the era when the Pennsylvania Railroad was the dominant passenger line in the Northeast, the station opened in 1935. It was designed in the Art Moderne style, with classical influences, by McKim, Mead and White, the renowned architectural firm responsible for the Brooklyn Museum and the James A. Farley Post Office in Manhattan. The marble walls of the terminal’s elaborate waiting room feature bas-relief carvings that depict the history of transportation, from Viking ships to airplanes. The station, made of ashlar granite, was built in 1916 in Collegiate Gothic style—probably chosen for harmony with nearby Drew University and St. Elizabeth University. Just across the street, the colossal Hartley Dodge Memorial, which serves as Madison’s town hall, has a granite façade similar to the train station, although it was built almost two decades later. This Carpenter Gothic–style wood-frame depot—built in 1874—is one of the few Victorian-era stations still in existence in New Jersey. The town itself is named after Fanny Wood, journalist daughter of a Central New Jersey Railroad official. The railroad was the town’s primary developer through a subsidiary, the Central New Jersey Land Improvement Company. Today, the town owns the station and uses it in part as a community center. One of four stations in the former railroad hub; only this and the Netherwood station remain. The distinguished architect Bradford Gilbert and CNJ’s chief engineer Joseph Osgood designed the brick-clad, Renaissance Revival building in 1902. Gilbert also gave us stations in Essex Fells, Westfield and Bernardsville. Plainfield was long an important stop for local and long-distance travel. Here, passengers could board a train and go directly to New Orleans, Chicago or points west. A Richardsonian Romanesque-style station, this one-story stone building with hipped roof—another Bradford Gilbert design—dates to 1902. Gilbert was also architect for Plainfield station and was known nationally for his railroad station architecture. In an unusual twist, financier and Far Hills resident Grant Schley paid the design and construction costs of the station. Schley’s Far Hills property, now known as Moorland Farm, is the site of the annual Far Hills Race Meeting. Rail service to the site began in 1838, although the current station dates to 1903. Designed by William H. Brown, chief engineer of the Pennsylvania Railroad, the stout Georgian Revival building’s Colonial-era look is well suited to historic New Brunswick, home to Rutgers University since 1766. The station follows a standard plan for medium-sized cities, created when the Pennsylvania Mainline underwent massive reconstruction between 1890 and 1910. Today, the station averages 5,000 passengers daily. Built in 1876, the three-story station saw its last train pull out in 1982. Built in Second Empire style—a rarity in New Jersey—the station is distinguished by its ornate roofline, central arch and third-story balcony. Originally part of the Delaware and Bound Brook Railroad (later the Reading Railroad) the station was leased to the Philadelphia and Reading Railroad in 1879 as a station on a planned National Railway between New York City and Washington, D.C. Today, it is used for meeting space and offices, but is under consideration to reopen as a stop on the proposed West Trenton Rail Line. This humble station is the creation of architect Henry Hobson Richardson, originator of Richardsonian Romanesque, a style that incorporates elements of Spanish and southern French design. Seldom in history has a building style been named after a single architect, but Richardson’s unique work defied existing naming conventions. The Richardsonian style emphasizes horizontal lines, rough stonework and picturesque rooflines—as seen in the Little Silver structure, one of 12 Richardson-designed railroad buildings. Richardson also designed Trinity Church in Boston and the New York State capitol building in Albany. Little Silver Station opened in 1890 on the New York and Long Branch Railroad, later absorbed by CNJ. Built in Queen Anne style in 1892 by architect John S. Rogers of Moorestown, the angular structure is considered an outstanding example of a rural train station. After a series of mergers, the station became part of the Pennsylvania Railroad. It served soldiers at nearby Fort Dix and also functioned as a freight depot. North Pemberton eventually became part of Penn Central. After that railroad’s financial troubles, trains stopped running in 1969. It served for a period as a museum of regional history and welcome center, but is currently closed. The oldest train station in New Jersey, this fancifully named station was built in 1856 in Italianate vernacular for Camden & Atlantic Railroad, later part of Pennsylvania Railroad. The building was typical of early stations, which served passengers and freight. Built of wood, it measures just 50 feet long by 25 feet wide. Rail service was discontinued in 1969, but the modest building was restored in 1994 and now serves as a meeting place for local groups. The depot’s name is derived from the area’s original name, a corruption of Lonaconing, the Lenape word for “where paths meet.” The Erie Railroad commissioned a number of architecturally distinctive stations. The architect, J. Cleveland Cady, also designed the Museum of Natural History’s south range and the original Metropolitan Opera House in New York City. The Romanesque Revival-style station, with Gothic elements, was built in 1872, predominantly of cut brown sandstone. The station has been modified over the years, although the exterior is original and many features have been maintained. Today it is owned by the town and used as a senior citizen center.