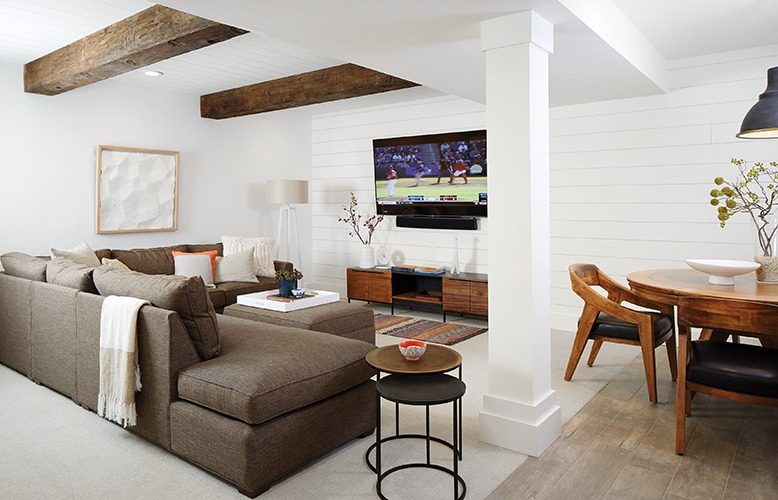 When this Somerset County family decided to finish their basement last year, they had no idea just how much they’d eventually use it. Originally planned for entertaining, the space took on new importance once Covid-19 hit, functioning as a home office for one family member and a favorite hangout for all.

The couple, we’ll call them Rob and Jill—they’ve asked us not to use their real names—are busy professionals with two elementary school–aged children. Their house is a spacious colonial but, like most families, they craved more room, especially a space separate from the main living areas.

The unfinished concrete-slab and cinder-block basement presented the perfect opportunity. Fortunately, they had formed a bond with designer Heather Tokarz. In a kismet moment six years ago, Heather and Jill were seated next to each other at a mom’s-group holiday party. The two struck up a conversation, and Jill, a new homeowner, quickly learned of Heather’s talents. “She just seems so quietly confident that I e-mailed her after the lunch and asked her to help pick paint colors. It expanded from there,” says Jill. The finished basement features several distinct areas, including a game area. Designer Tokarz paid close attention to the lighting fixtures. “I’m extra particular about lighting because it’s so impactful to a space,” she says. Photo by Laura Moss

Over the course of several years, Heather took on project after project. She and Jill even finish each other’s thoughts. Says Heather, “I’ve touched every room in her house.” Adds Jill, “Anything that’s not yet touched, we have plans for.”

But about that basement: Jill wanted a modern, rustic farmhouse look. She clipped pictures from magazines and obsessed over design websites like Houzz. She then presented her research to Heather. “I wanted the HGTV fantasy of a house done in an hour for a reasonable amount of money,” jokes Jill. For inspiration, Heather created mood boards. “It was super cool,” says Jill, “and helpful to plan the vision.” But ultimately, she adds, “the project took at least twice as long and probably twice as much money as estimated.”

Prior to the project, the 1,500-square-foot basement was a cavernous, open space. The family used it primarily for storage.

“It was just a blank, open space,” Heather says. “There weren’t a lot of walls.” The first priority was planning where everything would go. Rob and Jill’s wish list included a bar/kitchenette, full bathroom, hang-out space, kids’ play space, workout room, game area and yes, some space for storage. Heather was able to fit it all in, in style. “It’s actually like a small apartment now,” she says. With the plan in place, the creativity began. Heather sourced reclaimed wood for custom beams and barn doors. She selected porcelain tile, designed to resemble wood, for the flooring, and three other types of tile for the bathroom and bar area. To add interest, Heather had the kitchen tile laid in a herringbone pattern, and selected a dark grout for the bathroom tile. She also specified shiplap—a wood siding commonly used for exteriors—for the bare walls, a design trend that “is totally on point,” she says. Lighting was a major priority. “We spent a lot of time on every aspect of that,” says Heather. “It’s so impactful to a space.”

“Working with Heather reminds me of when I’ve gone out clothes shopping and seen lots of things I liked, but didn’t know how to pull them all together,” says Jill. “She just has a way of pulling it all together beautifully, and editing at the same time too.”

It took six months to complete the project—by which time the basement had a new role to serve. “It was originally meant for an entertaining space,” says Jill, “but now it’s used primarily as a Covid office for my formerly NYC-commuting husband. He’s now looking into turning one of the two bar taps into a cold brew, so clearly the use of spaces in a home evolves as time goes on.”