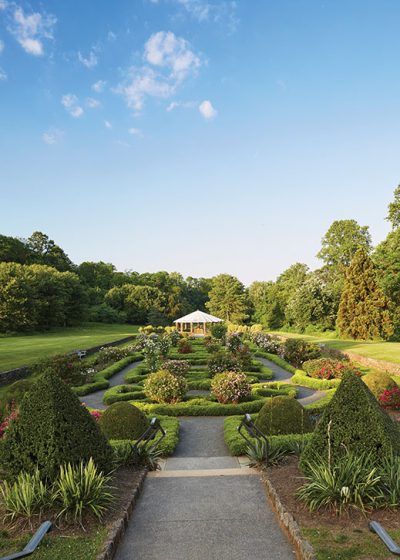 Ah, spring. For many, it’s a time to dig and plant. For others, it’s a time to get out and enjoy what others have planted. At Deep Cut Gardens, there are pleasures aplenty for gardeners and visitors alike. The 54-acre park, tucked away in a residential area in Middletown, is unique in that it is an instructional garden; visitors are encouraged to walk among the various plant species, ask questions of horticultural staff, and do research in the reference library.

The history of Deep Cut is as rich as its soil. In the late 1600s, it was the site of Monmouth County’s earliest European settlements. Divided into 36 home lots, it was a place of family farms passed from generation to generation for more than 250 years. In 1890, the sheriff took over the land because of unpaid taxes. The property changed hands repeatedly until Teresa and Edward Dangler purchased the then 35-acre parcel of land in 1925 and built a massive two-story, 10-room Colonial Revival mansion on its hilltop. Ten years later, crime lord Vito Genovese purchased the spread and refashioned it in the manner of his native Naples, Italy. New features included an Italian garden crafted with Mount Vesuvius rockery, a terraced garden cascading down the gently sloping hill, and a large, rectangular garden culminating in a picturesque masonry pergola.

Genovese’s grandiose plan was cut short when he fled the country in 1937, fearful of prosecution for the murder of a fellow mobster; the garden received an additional blow later that year when the mansion mysteriously burned to the ground. All was not lost, however; subsequent owners renovated the gardens, added a greenhouse and built a new house. The final private owners, Marjorie and Karl Wihtol (who built the house that is now the horticultural center) bequeathed the land to the Monmouth County Park System in 1977. Additional land was acquired, and Deep Cut Gardens opened to the public the following year.

The park, one of more than 30 in Monmouth County, hosts about 100,000 visitors each year, according to senior park manager Ken Olsen. “They come here for the tranquility,” he says. “There’s a Zen feeling here. There are many secret areas where you can sit and relax.” (The Garden State, appropriately, has hundreds of municipal and county parks in addition to more than 50 state parks.)

Like many public parks, Deep Cut is planted so something is blooming practically every month of the year. All winter, orchids and succulents thrive in its spacious greenhouse. Springtime means daffodils and tulips, followed shortly by the magnificent rose garden in June, Deep Cut’s most popular attraction. Planted in the large, rectangular garden that Genovese envisioned all those years ago, the rose garden is home to about 50 different varieties. “The rose garden is a popular draw,” says Olsen. The weeping hemlocks that line the garden are also favorites. “Everyone is in awe of them,” says Olsen.

To support its dedication to education, the park is staffed by a team of horticulturalists, master gardeners and trained volunteers. “We are dedicated to the home gardener,” says Olsen, who has worked at the park on and off since 1979 and full-time since 2007. “Whether it’s insects, diseases, anything. All of our people are happy to answer any questions.”

Also unique: Deep Cut Gardens has a guest book. Visitors are encouraged to leave comments—and they do, especially those who come for special events, including proposals and wedding pictures.