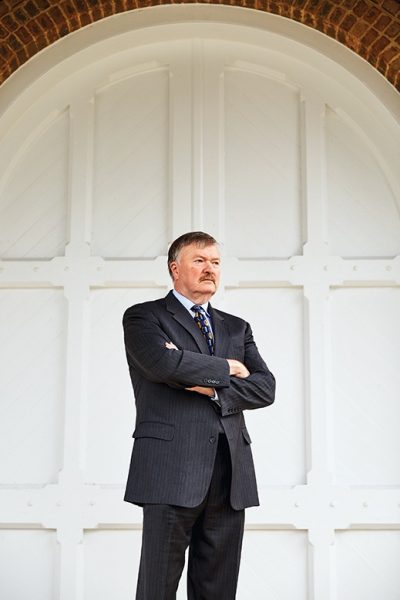 When he’s not traveling the world to assist in counter-terrorism, John Farmer works at the Wood Lawn Mansion, headquarters of the Eagleton Institute at Rutgers in New Brunswick. Photo by Matt Zugale

Of the many jobs on John Farmer’s résumé, perhaps the most interesting is governor of New Jersey. He served for all of 90 minutes.

It happened in January 2002, when Farmer was New Jersey’s attorney general. Christie Todd Whitman had stepped down as governor to become administrator of the federal Environmental Protection Agency, and Farmer, under a quirk in the state Constitution, became governor until the state Senate could swear in new officers to temporarily succeed her.

“I was acutely aware that no one elected me,” Farmer recalls, “so I stayed locked in my office until the baton was passed. I told my secretary not to bother me unless there was a terrorist attack.”

Oddly enough, Farmer, a lawyer and former dean of Rutgers Law School, went on to become one of New Jersey’s most respected fighters in the war on terror.

“I’ve had an unusual career,” admits the 62-year-old Flemington resident. “I’ve worn a lot of hats.”

Born in Jersey City, Farmer earned his undergraduate and law degrees at Georgetown University. He worked as a law clerk for a justice of the New Jersey Supreme Court; as an associate at the prominent New Jersey law firm Riker Danzig; and as an assistant U.S. attorney. Starting in 1997, he was chief counsel to the Whitman administration, before serving as attorney general from 1999–2002.

[RELATED: Meet the Congressman from the Jersey Shore]

These days, Farmer is director of the Eagleton Institute of Politics at Rutgers and also leads the Miller Center for Community Protection and Resilience, a partnership between the Eagleton Institute and Rutgers Law School. Its mission is to help ensure the safety of vulnerable communities, especially communities of faith, that are in danger of hate crimes or terror attacks. In this role, Farmer has assisted locales as close to home as Chicago and as far flung as Molenbeek, Belgium.

Like many New Jerseyans, Farmer’s life took an unexpected turn on September 11, 2001, during his tenure as attorney general. He was in Atlantic City for a meeting with African-American community leaders. The subject was racial profiling. Then his pager went off. The World Trade Center had been attacked.

Farmer arrived in Jersey City by helicopter shortly after the first tower fell. “I remember the EMTs racing around, and we didn’t know what was going to happen next,” Farmer says. “It was crazy. There was so much to consume that day. So much went on. I didn’t digest what happened until we flew back to Trenton at 3 am.”

As the nation sorted out the tragedy, Farmer was appointed senior counsel to the 9/11 Commission, chaired by former New Jersey governor Thomas Kean. Based on the commission’s research and his own observations, Farmer wrote a book, The Ground Truth: The Untold Story of America Under Attack on 9/11, which examines what happened before, during and after the attack.

“I wanted to know what happened during 9/11 so something like that wouldn’t happen again,” says Farmer. He concluded that the attack could have been avoided through better communication among government entities.

“I thought the attorney general job would be fun,” Farmer says with a laugh. “I thought there would be interesting cases to prosecute, but my job was very different than what I envisioned.” It turned out that a big part of the job was serving as a liaison connecting minority communities and the police. “I had no idea that I would practically spend half of my time as attorney general as the go-between [for] those groups,” Farmer says. “But what we did was vital work, and it prepared me for what we’re doing now.”

Farmer was on sabbatical from his role as dean of Rutgers Law and the university’s general counsel when Paul Miller, the former general counsel for Pfizer, approached him about a program that would help vulnerable communities. This became the Miller Center. The initial challenge, Farmer says, was a “research project that was to identify the best way for vulnerable communities to survive possible attack.”

In Paris, Farmer got much more than he bargained for.

He was in meetings discussing security systems with Jewish leaders when word came that, just blocks away, a terrorist who had pledged allegiance to ISIS had attacked a kosher food market. The gunman killed four Jewish hostages and held 15 others until local authorities stormed the market and ended the siege. Farmer left the meeting and headed to the scene—once again arriving amid chaos and gore. “The common denominator was the look on people’s faces,” Farmer says. “They had that look of fear since they didn’t know what was going to happen next.”

But Farmer also recognized a difference in the way Parisians handled the crisis.

“With 9/11, the problem was that communication went from top to bottom,” Farmer says. “When there is an emergency of that magnitude, you can’t contact the president and get things done properly. How it is done in Paris is the opposite of top to bottom. All of the Jewish businesses in Paris were closed within an hour of the attack.” Farmer can’t reveal the means of communication among the businesses, but says, “The alacrity of their response demonstrated a commitment to planning, to building effective communication networks, and to remaining vigilant in countering emerging threats.”

Farmer has applied his practical experience in leading the Miller Center, which has conducted site assessments and developed security plans in such cities as Brussels, Belgium; Copenhagen, Denmark; and Chicago, Illinois.

In March 2016, he travelled to Brussels the day after suicide bombings left 35 dead and more than 300 people injured. “It was like a ghost town,” Farmer says. “ISIS recruitment was high there. It was incredibly sad. People stayed home. There were no tourists. They needed help.”

To understand the situation, Farmer and an associate, Paul Goldenberg, a veteran New Jersey law enforcement official from Jackson, who is a member of the U.S. Department of Homeland Security Advisory Council, interviewed Brussels residents about their concerns. Then they played the videos for the local police.

“There was a huge disconnect between the police and the Muslim community in Brussels,” Farmer says. “The police didn’t believe how Muslims felt about them. They saw the videos and knew something had to change—and it did.” Farmer and Goldenberg formulated a plan that included training sessions for the local police and a one-day seminar bringing together police and community members in sensitive districts.

Brussels deputy mayor Jonathan Biermann affirms that Farmer and Goldenberg’s work made a difference in his city. “I was impressed with their capacity to create relationships,” Biermann says.

For Farmer, it’s no surprise that a guy from Jersey can make a difference in the sophisticated cities of Europe. “New Jersey was the perfect template for what we are doing with the Miller Center,” he says. “This is the most diverse state in the country. It’s the most densely populated state. We have a lot of vulnerable communities.”

And while he addresses some of the world’s most complicated issues, Farmer’s approach sounds simple. “It’s about communication and having a plan, which is what I often bring to the table when we visit cities that need help.”

Back home, Farmer is concerned about tensions in our own country. “Emotions are running high,” he says. “We haven’t been this divided since the Civil War. Office holders today face challenges far beyond what I faced.”

He’s also concerned that acts of terror and mass shootings no longer seem shocking in America. “What’s upsetting is how desensitized people are after these horrible acts happen,” Farmer says. “When the shooting in Columbine happened [in 1999], it was in the news for a month.”

Still, he hopes people will remain mindful of the simple slogan, “If you see something, say something.” It is, he says, the best way to stop potential tragedies.

Meanwhile, his own career has unfolded with few signposts. “There was no way to plan for what my career became,” Farmer says. “If I planned my career, it wouldn’t have been this good. My law career gave me a chance to experience a very interesting life. It’s been filled with surprising twists.”